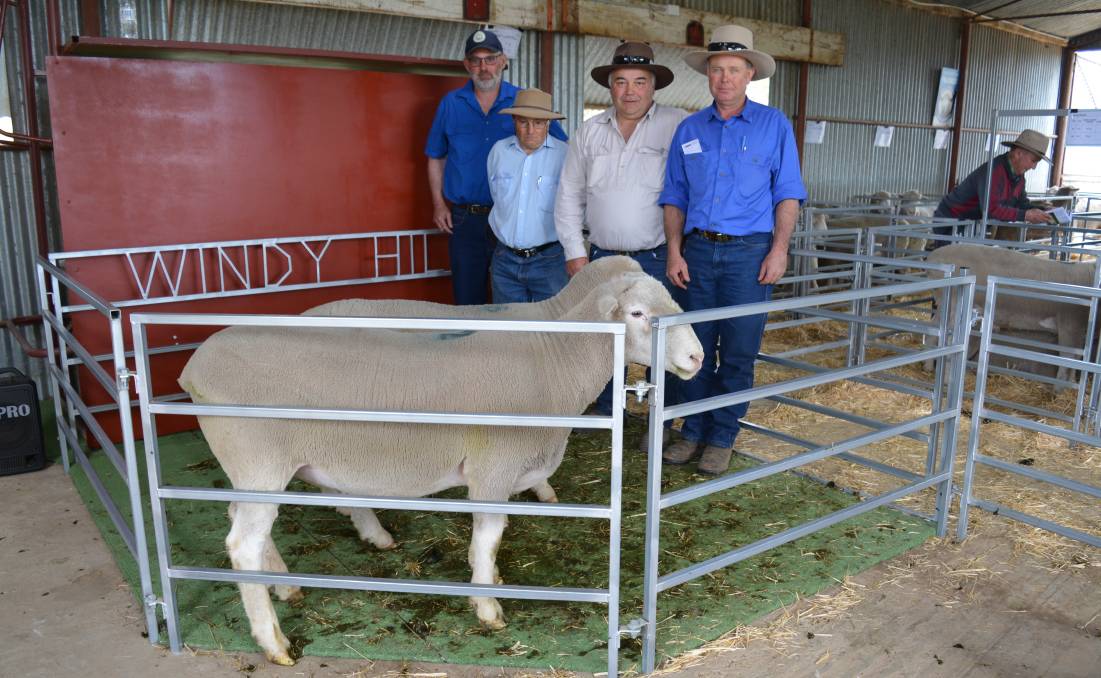 Chris Roweth, Windy Hill Poll Dorsets, Carcoar, with with members of the Loloma Partnership from Forest Reefs, also the volume and equal top-priced buyers; Steve Pascoe, Dave Pascoe, and Jason Pond, with part of their draft.

Windy Hill average lifts by $100 a head, helped by improved consistency and season.

One of the previously passed-in lots also sold imediately post auction, taking the final clearance to 62.

One of the top-priced buyers was Loloma Partnership, Forest Reefs, which bought 11 rams to average $1190.

Jason Pond, Loloma, said the partnership had targeted rams with good eye muscle, which were "good, solid, think rams all the way through".

The business, which has purchased at all five of the Windy Hill on-property ram sales, will join 1500 to 1600 first-cross ewes this season, the ewes being of Walwa breeding from the McCormack family at Gurrundah, which for the past three years have been purchased through the Yass saleyards.

Mr Pond said spring had started a touch early this year, with the feed already starting to come away.

Last year's crop of lambs went into the heavy export market with carcase weights of 22-26 kiograms.

Mr Connolly, a Windy Hill client of six years, said the ewes were predominantly first-cross purchased in the past couple of years through the Yass saleyards, but he had also retained a line of second-cross ewes to trial and to reduce the number he would have to buy back in.

He targets mainly the sucker market so was after rams with good carcase shape.

Lee and Stacey Matthews, Blayney, were at their third Windy Hill sale in four years and purchased four rams to a top of $1400 to average $1175.

They too were after sucker type rams with plenty of meat and clean heads for their 1200 March/April lambing first-cross ewes.

The Windy Hill stud is operated by Chris and Fiona Roweth, who in addition to their Poll Dorset stud run 1400 first-cross ewes and a small Angus herd.

Mr Roweth was pleased with the mostly return clients, who he said seemed to be happy with how their rams had worked for them.

He said the sale average was up about $100 a head on the previous year and each year they had also worked on improving the consistency through the draft.

The sale fielded a strong contingent of buyers from the Forbes area, where a lot of producers joined their ewes from October onwards, and was conducted by agency McCarron Cullinane, with Lindsay Fryer, Orange, as auctioneer.