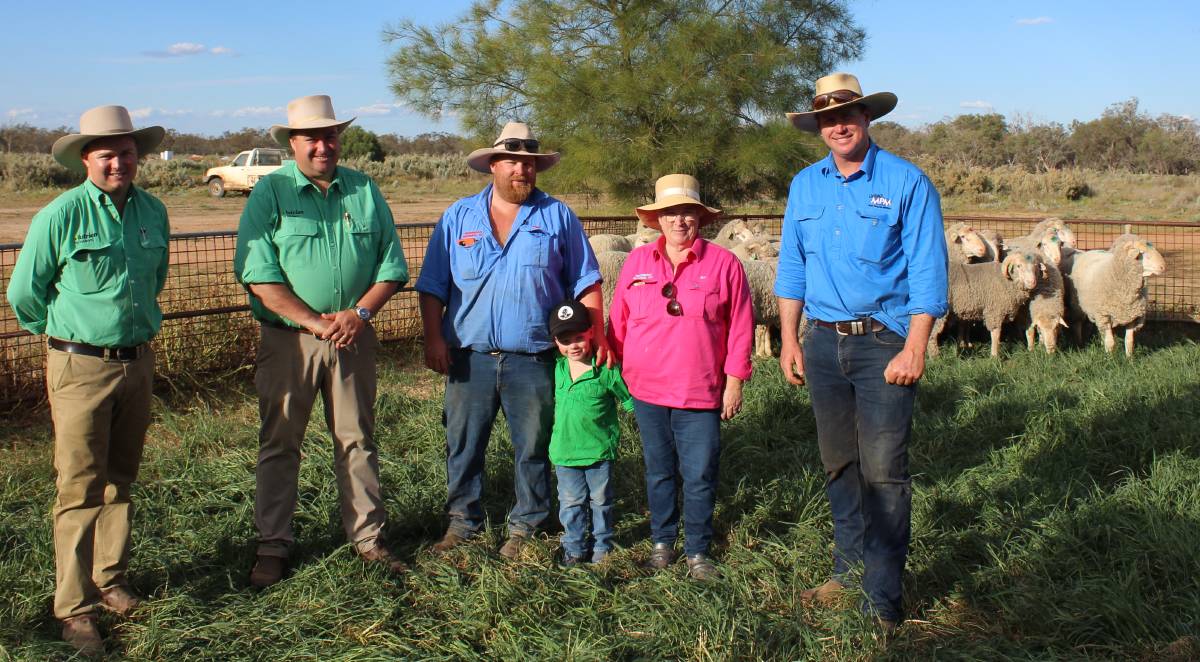 A most successful and satisfying first sale for Outback MPM new owners Richie and Julia Steele, at The Marra.

A TOTAL auction clearance of 120 rams averaging $1540 was a thrilling first sale result for Richie and Julia Steele who took over the Outback Mutli-Purpose-Merino (MPM) stud in June last year from Peter and Christine McKidd.

The stud, now based at Mundadoo, 90 kilometres north of Nyngan, hosted several dozen attendees of which 16 bought all the rams which sold to a top price of $3200 plus another 80 grade rams after the sale. Rams sold to returning clients plus several new buyers which heartened the Steeles. Buyers came from western regions including Broken Hill, Walgett, Gilgandra and Walcha, with rams also going to Victoria and South Australia.

A new buyer, Doug Lisle of Lisle Pastoral, Walcha, paid the top money among his eight purchases averaging $1950. The saletopper was a high performer within the top one per cent for yearling eye muscle depth (YEMD), top 5pc for yearling fat (YFAT) and yearling staple length (YSL), and 20pc for yearling weight (YWT).

Three buyers from the Walcha district purchased 18 rams. Jock Fletcher, Green Range, Walcha, bought six rams for a $2017 and paying up to equal second top price of $3000 for one, another high performer within the top 1pc for YEMD.

Buyers of most rams were Tom and Jill Elder, Woorndoo Pastoral Company, Girilambone, who purchased 20 rams up to $2700 to average $1685. Among the selections was the Charity ram, which they bought for $1300.

The charity, RUNDIPG, is dedicated to improving outcomes for kids and families facing the most deadly pediatric cancer, Diffuse Intrinsic Pontine Glioma, or DIPG of which there are no treatments and median survival is nine to 10 months post diagnosis.