Prices were more than $100 dearer than last year. 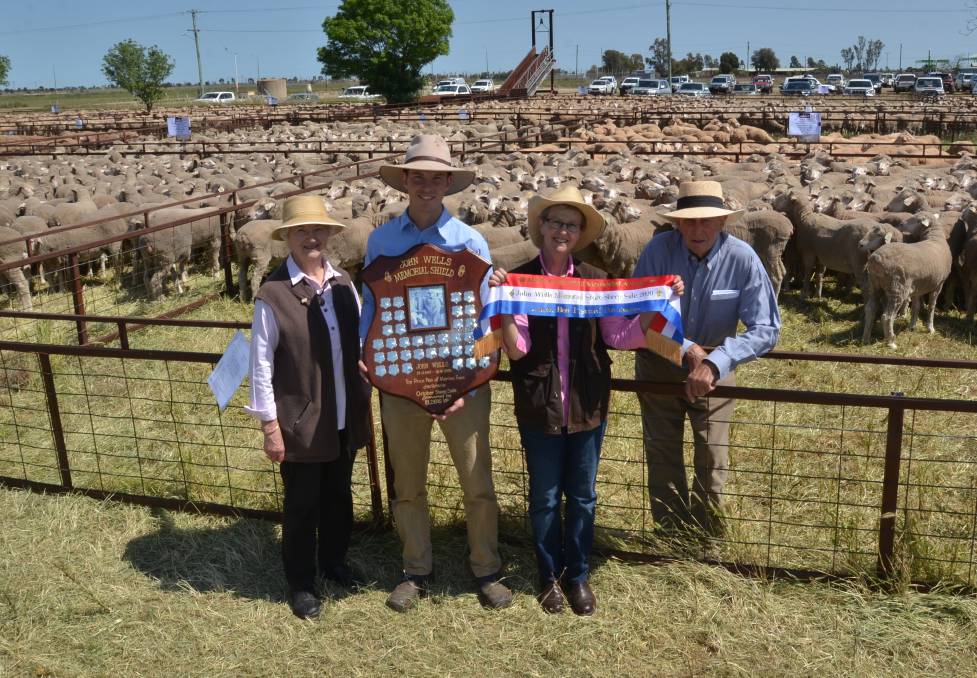 Bids flew in for the roughly 10,000 sheep offered at the 18th annual John Wells Memorial Sheep Sale at Jerilderie on Friday, young ewes making prices never seen at the sale before.

Auctioneer Nick Gray, Elders Deniliquin said prices were at least $100 dearer than last year's sale, which topped at $285, with young ewes averaging around $322.

However, due to the great season numbers were almost half of what was yarded last year.

The top price was a staggering $382, paid for 156 May/June 2019-drop ewes, September shorn with Willandra blood from Caroline and Craig Heath, Wiraki, Jerilderie. They were bought by Mannes Agencies, Coleambally.

The pen was awarded both the John Wells Memorial Shield (for the top priced pen) and Best Presented, a new award which was introduced this year in honour of previous shield winner Mark Wettenhall, Cara, Jerilderie who sadly passed away earlier this year.

"They were magnificent ewes, you don't usually see those ewes up for sale, they're usually keepers," Mr McKenzie said.

Mr Heath said they were their last pen of ewes to be sold as they will move to running solely wethers at Wiraki to concentrate on their family's other property and stud, Willandra.

The ewes were the sisters of the wether lambs which topped Jerilderie's November store sale last year at $147.

The Wettenhall family, Cara, Jerilderie kicked off the sale to a great start, with 203 May/June 2019-drop, August shorn, Willandra blood selling for $362.

Even the older ewes sold for up to $285, paid for a pen of 174 May/June 2018-drop Merino ewes, August shorn, Woodpark Poll blood from Riversdale, Jerilderie.

Buyers were from throughout the Riverina, Central West and Victoria.

"We've had sheep go in every direction," Mr Gray said.