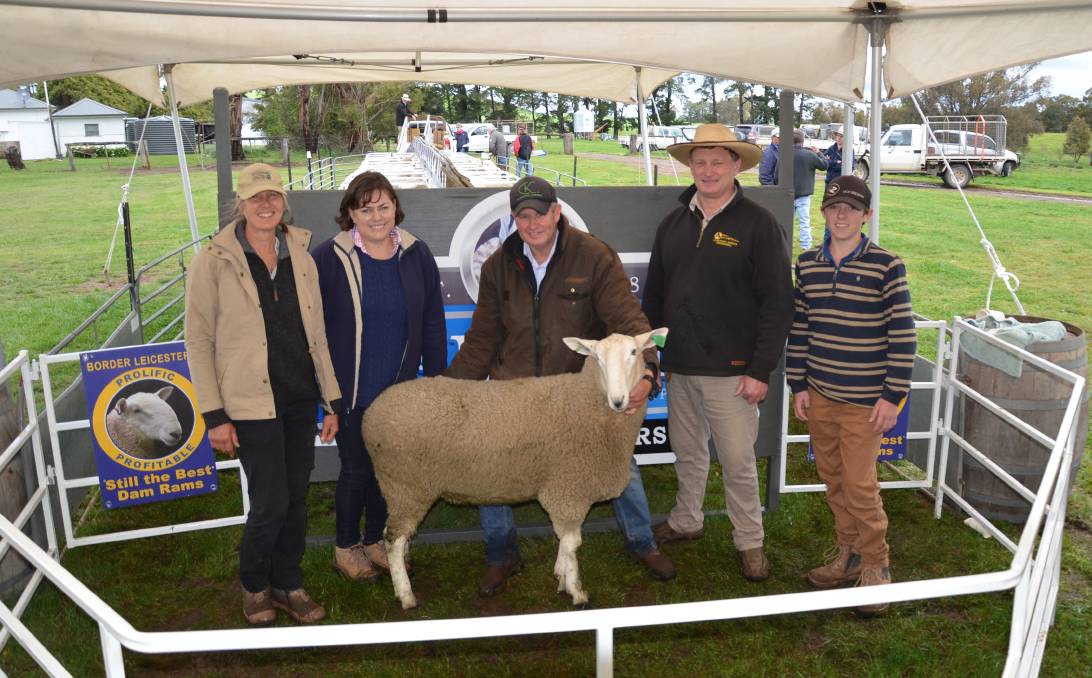 The rain could not keep buyers away from the Talkook Border Leicester on-property sale on Thursday, with the Crookwell stud selling all 55 rams offered for a top price of $3700 and average of $2052.

The average was up by more than $1000 on last year's sale and stud principal Scott Anderson said they were overwhelmed by the result, which was buoyed by new stud and commercial interest.

Mr Anderson said the last five years had been a transition period of the stud, with the main focus to increase the overall size of the animal. He said their next breeding objective was wool quality.

"We've just recently bought a ram from Wattle Farm in relation to his bloodlines which go back to The Oaks and Chain o Ponds, that's to stabilise the wool quality of the sheep," Mr Anderson said.

"We're going to keep the wool as fine as we possibly can, while holding the overall tone and muscle capacity of the animal." Demand was strong all throughout the sale, with a bidding war on Lot 17 leading to the top price of $3700, purchased by new clients the Buerckner family of Bauer stud, Ariah Park.

The ram was a Talkook ram through and through, by Talkook Arena over a Talkook ewe. Talkook Arena was the Interbreed Objective Measurement Champion at the Australian Sheep and Wool Show in 2017.

"He's a very balanced sheep and he's very dense in the wool, he's obviously not the biggest sheep here but his structure is superior," Mr Anderson said of the sale-topper.

The second highest priced ram was just behind, purchased by Martin Walsh for $3600. The ram was one of the five selected by Talkook and was by Talkook Cena, who goes back to a Retallack sire, and out of a Wattle Farm dam.

The next ram in line in the catalogue stood out for his impressive scanning data with an EMW of 92, EMD of 52 and EMA of 30.46. He was bought by James McCormack, Red Hill, Crookwell for $2100.

The volume buyer of the day was Ray White Emms Mooney, Bathurst who purchased 10 rams in total on behalf of a client.

There was a lot of local support at the sale but buyers also came from afar, with bidders from Cooma, Dubbo and Koorawatha in attendance.

"We're just so grateful for the support of everyone coming in this weather," Talkook's Kylie Anderson said.

The sale was conducted by MD and JJ Anderson with director Greg Anderson taking the bids.