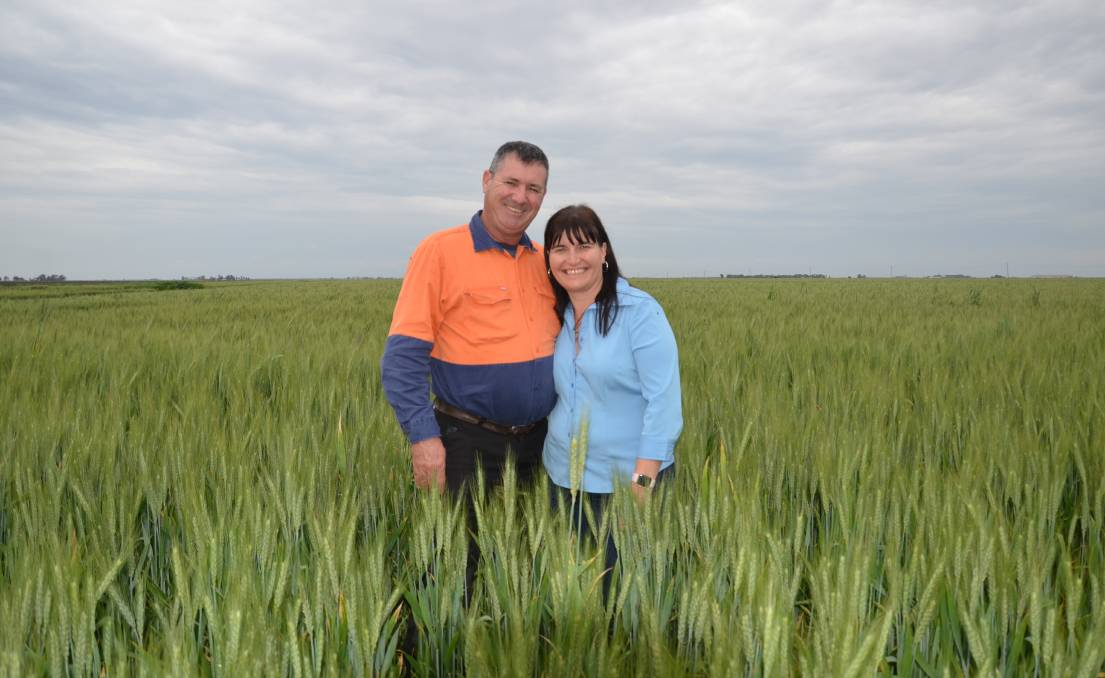 The 2018 NSW Farmers of the Year, Glen and Julie Andreazza, Griffith, are excited to have some water, be planting a rice crop and are anticipating their winter cereals harvest.

In 2019, popcorn was one of few crops offering enough return to offset the high water prices.

After two years of drought and low water availability, 2018 NSW Farmers of the Year Glen and Julie Andreazza are entering an exciting period.

The Griffith irrigators, who supply wheat to Arnotts for Tim Tams and Scotch Fingers, are preparing to harvest their best wheat crop in years. They are also planting rice for the first time in two seasons and are entering their second year of growing popcorn.

"After two shocking seasons in a row, it's just exciting to have some water back," Mr Andreazza said.

"Last year we didn't plant rice and a lot of our wheat was not watered so we were back to a third of our normal tonnage."

However, Mr Andreazza said popcorn had emerged as an opportunity last year, the crop being one of the few offering enough potential to offset the high water prices.

"We had nearly 40 hectares of popcorn, which was mostly grown on bore water, there was nothing else we could grow which would return the same money as selling our water," Mr Andreazza said.

"It's a very rewarding crop to grow, especially when you can take it home and pop it yourself.

"It's one of the first commodities I've been able to grow and just go from paddock to plate instantly, without it having to be processed."

Mr Andreazza said the crop did not offer as high yields as grit corn, which they grew previously, but they were able to get just under seven tonnes a hectare last year.

"We had a lot of disease in it because of the wet weather and there was probably a tonne to the hectare left in the paddock," he said.

"If we hadn't had that it would have gone somewhere between 7t/ha to 8t/ha, which is exceptional."

The Andreazzas plan to grow popcorn again this year, one of only a handful of growers kept on by their supplier after COVID-19 restrictions shut down popcorn's biggest market, cinemas.

They will also put in around 182ha of rice across their three properties.

"We would usually grow somewhere in the vicinity of 200 to 240 hectares (of rice) so we're not too far off that," Mr Andreazza said.

The couple, who were awarded NSW Farmers of the Year for their ability to balance sustainability with profits, while offsetting the risks of seasonal conditions, said the award had led to incredible opportunities, while inspiring their family and community to take a greater interest in farming.

"We got to attend a lot of functions and events, including the Arnotts Ball and Sydney Royal Easter Show," Mrs Andreazza said.

She was also asked to speak at events and on podcasts, sharing her own mental health challenges after the family was confronted by just about everything life could throw at them in the year prior to their win.

"I told my story at the stump at Henty Machinery Field Days and from there I've been part of the Murrumbidgee Primary Health Network's program Tell It Well and was on John Harper's Mate Helping Mate podcast," she said.

She said the award had also inspired their four children to become even more involved with the farm.

"Our youngest daughter has just started doing an ag diploma on top of her law degree," she said.

"Our oldest son, Daniel, is pretty keen to do more and more on the farm. He always says 'who wouldn't want to go farming if you've got that opportunity to get on board,' as it is pretty hard for young people to get involved in farming these days because of the capital outlay."

Mr Andreazza said they were honoured that the award had recognised them as a couple.

"We realised that we were probably the first couple to have got it, normally it's either husband or wife as an individual so we're very privileged to have taken it out together as a family," Mr Andreazza said.

"I think they came to interview Glen, but when they started speaking to us they realised it was a family affair," Mrs Andreazza added.

The couple said they saw it as part of their role as NSW Farmers of the Year to promote farming at every chance they got.

"I think COVID-19 has been a chance for everyone to look outside the box and see there is a real future in farming, there are career opportunities outside of the high rise buildings in Sydney," Mrs Andreazza said.

A model that's hard to 'beet'