The top and average price lifted for the Moore family. 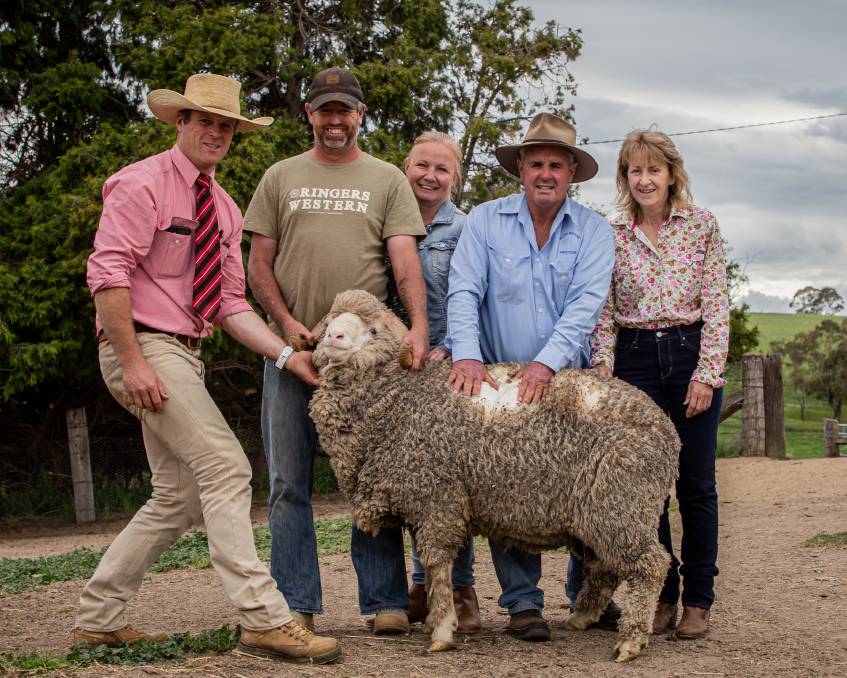 Heavy cutting rams were met by one of the biggest crowds yet at the Blink Bonnie Merino ram sale at Tarana on Friday.

The draft were on average eight kilograms heavier than 2019, thanks to the arrival of rain in February and March, and proven themselves as wool growers.

"The rams were growing a lot of wool and some had 90 to 100mm in the seven month growth and some were cutting over 10kg of wool when shorn at that length," Mr Moore said.

"Genetics and selection are the only two choices you have got when breeding to improve them. Our sheep classer Allan Clarke from Dubbo works well alongside me. It is very pleasing to get a good line of sheep to cut a lot of wool.

The top price 89 kilogram ram that boasted a 19.2 micron fleece, fleece weight of 102 per cent, eye muscle of 30 and fat score of four was secured by Grant Toole, Spartan Pastoral Company.

The ram was one of six heading with Mr Toole to average $1650.

Spartan Pastoral had been busy spending almost the last month shearing up to 7000 sheep across properties at Nyngan, Parkes and Bathurst.

Shearing took place every eight months with their sheep growing 10mm per month.

"We shore the adult ewes and they cut 4.6kg as an average at eight months and reared a lamb," he said.

"(We look for) good wool cutters, good stretch, good bodies and long staple wool. We are trying to grow that long staple, SRS crimp style of wool. I don't chase micron, I chase more the length and the kilos."

He said they would sit on this year's wool and preferred to chase return per dse (dry sheep equivalent).

The 186 one-year-old ewe offering were secured by Chad Bissell,The Lagoon, for $228/hd.

Mr Moore labelled it a sale full of very spirited bidding and the atmosphere was very enjoyable looking out to green countryside.

Elders Bathurst were agents with Dave Simpson as auctioneer.