A commitment to breeding heavy cutting fine wool Merino rams by the Barron family paid off. 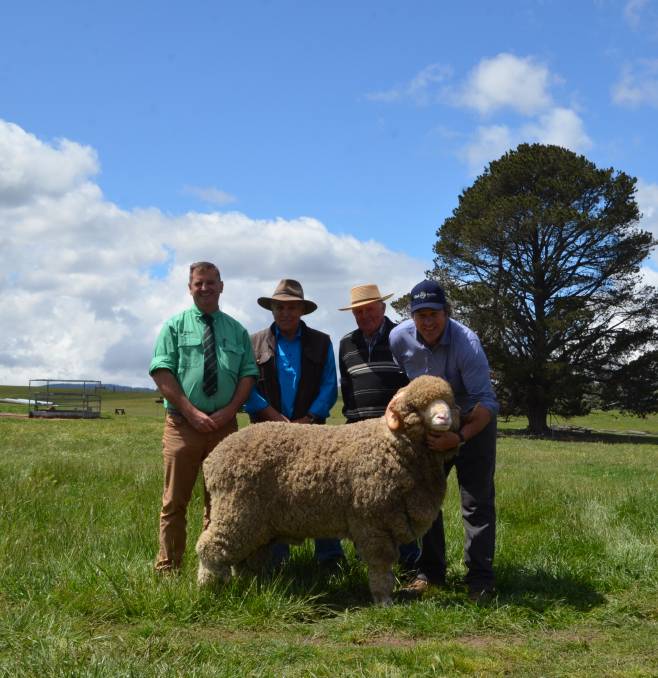 The continuing commitment to breeding heavy cutting fine wool rams on their Adina Merino and Poll Merino stud, Cooma by James and Julie Barron, and James' parents Ray and Margaret was underlined when they offered 40 Merino and Poll Merino rams to realise a top price of $7250 during their 20th annual auction.

During the auction they sold 38 rams for an average price of $2421.

The top priced ram at $7250 was bought by Lionel and Stephen Platts, Dungaree Pastoral Co, Bombala who have been long term supporters of the genetic direction taken at the Adina stud.

The ram's fleece measurements of 18.7m, 3.4 Standard Deviation and 99.8 percent Comfort Factor, along with his weight of 108kg impressed the brothers who will use their new sire to breed replacement rams for their own use.

Stephen Platts said they were chasing the ram's genetic line having a long pedigree of Adina-bred bloodlines.

"He is obviously very productive with a long staple of very stylish wool," Mr Platts said.

Last week, the Platts' brothers sold wool from their 4000 wethers which averaged $2000 a bale.

"They cut around 6kg which was back a bit due to the drought," he said.

"We normally join 5500 ewes for a lambing of 100pc and we are continuing to lift the fertility of our ewes.

Second top price at $5500 was paid by Paul and Neil Seaman, Crookwell who returned to secure their choice of the draft.

They have a lot of success in winning fleece competitions and their ram recorded fleece measurements of 18.5m, 2.5 SD and 99.8 pc CF.

Speaking after the sale, James Barron was really appreciative of the support from loyal wool growers, many of whom have suffered badly during the drought.

"These are the best grown team we have ever presented and I am happy clients were able to get what they wanted," he said.

"The average weight of the rams penned was 105kg.

"The sale made our hard work through the drought worthwhile, especially when we saw clients wanting heavy cutting rams with fine and soft handling wool."

The auction was settled by Elders and Nutrien, Cooma with auctioneer Rick Power (Nutrien) taking the bids.