The garden's design was influenced by that of the Shugaku-in Imperial Villa garden in Kyoto, a stroll garden created in the mid seventeenth century. 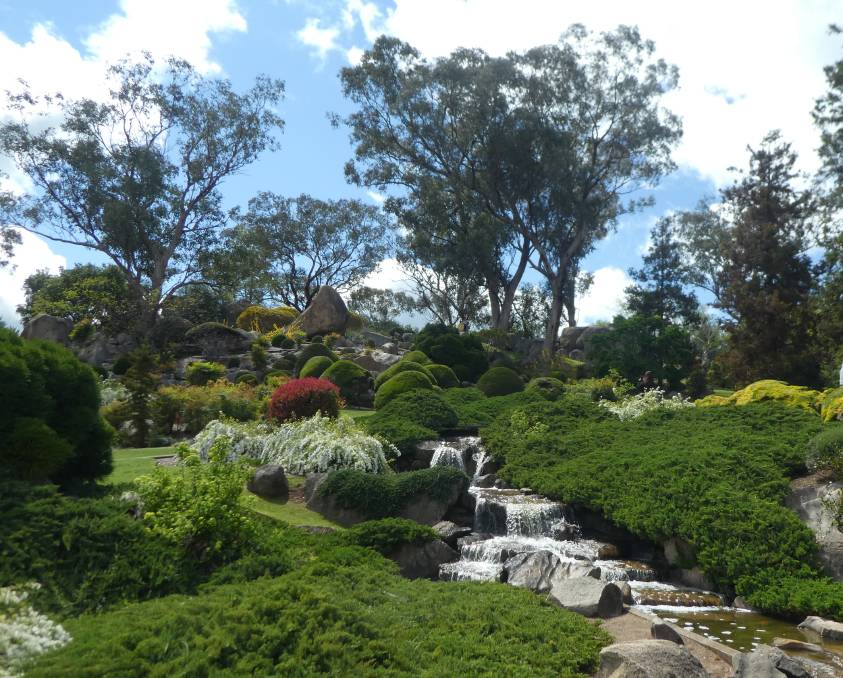 The stream in Cowra's Japanese Garden follows a symbolic transition from a mountain top, through meadows, forests and lakes, to the cultivated seashore.

Fate having sent NSW an unexpectedly fabulous spring, it's a wonderful time for garden visiting - you're safely in the open air and it's easy to observe social distancing.

I hadn't visited Cowra Japanese Gardens for many years, but hearing the rain had produced a display of cherry blossom to die for, it was time to make up for my neglect.

I need hardly add that this decision was the key for a howling westerly to roar through the state, ravaging every cherry tree in its path.

But October is the month for flowering trees and shrubs and despite the gales we find magnificent flowering may (Spiraea), lilacs, camellias, viburnums, forsythias, Indian hawthorns (Raphiolepis) and magnolias to admire and enjoy, enhanced by cloud-pruned cotoneasters and crepe myrtles.

The five hectare Japanese garden in Cowra was opened in 1979 but the idea for it dates from the early 1960s, when the Japanese government decided to move all their Australian war dead to a single burial ground in Cowra where a cemetery already existed for the Japanese prisoners of war who had died during the 1944 Cowra break-out.

Members of the Returned and Services League of Australia (RSL) continued to maintain the enlarged cemetery and in 1971 Cowra Tourism Development, in recognition of the bond this had created with Japan, proposed the creation of a Japanese garden.

The distinguished Japanese landscape architect Takeshi "Ken" Nakajima (1914-2000) was invited to design the garden on what must have been a challenging site: a steep, stony, dry, north-west facing former tip.

Fortunately, from Mr Nakajima's point of view the land had two things in its favour.

The first was the proliferation of large granite rocks, covered in the lichens and mosses beloved of Japanese gardeners.

The second was the size of the site and its extensive views over the Lachlan valley, big bonuses for a designer accustomed to working within tight boundaries.

There was also a good depth of fertile topsoil and an annual rainfall of 600 millimetres.

The garden's design was influenced by that of the Shugaku-in Imperial Villa garden in Kyoto, a stroll garden created in the mid seventeenth century.

Rocks and water are essential elements of Japanese gardening so Mr Nakajima designed an artificial stream springing from a symbolic mountain to curve round the hillside and fall over rocks, under bridges and through a small lake before emerging into a large lake symbolising the sea shore.

His philosophy was to create a Japanese garden in an Australian setting, using plants appropriate to the site and climate.

He "captured alive" the borrowed landscape by keeping the existing yellow box (Eucalyptus melliodora) within the garden, but also introduced pines that are an important element in Japanese gardens.

Mr Nakajima continued to visit Cowra throughout his life and after his death, his ashes were buried in the gardens.