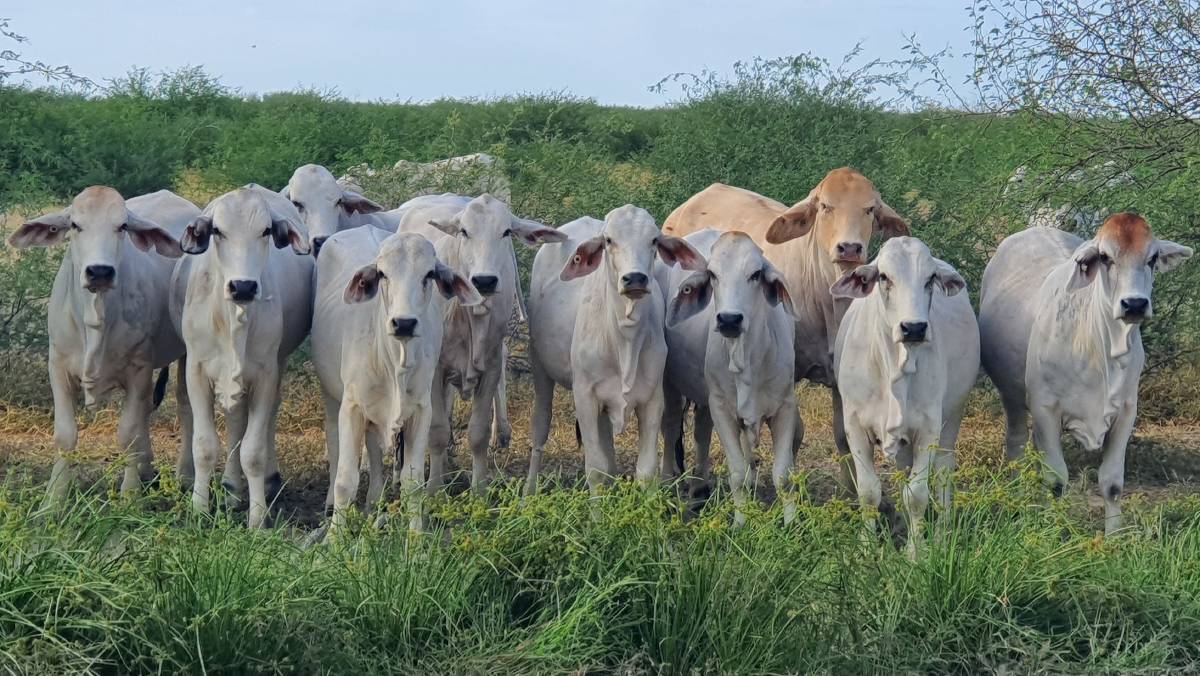 Demand for Brahmans from North Queensland has seen Kennedy Rural, Georgetown, sell and deliver more than 10,000 head to many parts of New South Wales in recent months as graziers south of the border restock their operations.

Paddock deals have culminated in thousands of cattle being trucked across the border in recent months.

Demand for larger lines of quality cattle has seen North Queensland become the go-to market for New South Wales graziers as they rebuild their herds.

The strong demand from southern restockers has not only provided competition at northern store sales, but also seen paddock deals culminate in thousands of cattle being trucked across the border in recent months.

Since March of this year, private agency firm Kennedy Rural has successfully sold and overseen the transport of in excess of 10,000 head of cattle into areas of NSW.

"I'd estimate that of the 10,000 plus head that we've sold in New South Wales since the first week of March 2020, 70 per cent would be straight Brahman, Brahman-cross cattle," Mr Kennedy said.

"The majority of the cattle, I'd say 70pc of all those cattle, were last year's weaners, No.9's, with up to 60pc of these being steers and heifers."

Mr Kennedy said his company had marketed the majority of the cattle direct to the clients across the border, with about 10pc of the cattle sold via AuctionsPlus.

"We found there was enormous demand for cattle from graziers and producers from these areas chasing cattle after years of drought and due to the selldown of their herds; we found no resistance or any issues with buyers and high-grade Brahman," he said.

"Many of the cattle that were sent south were cattle suitable for feeders, with a liveweight of over 300 kilograms and loaded at around 30 per deck.

"We drafted and sorted these cattle for their new destinations, which usually involved a 5pc rejection rate."

The majority of the cattle sourced in these private transactions came from clients of the business in areas of the north west and gulf regions like Julia Creek, Richmond, Charters Towers, Hughenden, McKinlay, Cloncurry, Croydon, Georgetown and Burketown.

Proving the adaptability and the acceptance of Brahmans in a diverse range of topographies, the cattle from Queensland found new homes in areas such as Walgett, Coonamble, Mungindi, Collarenebri, Tamworth, Warren and border areas around Texas. 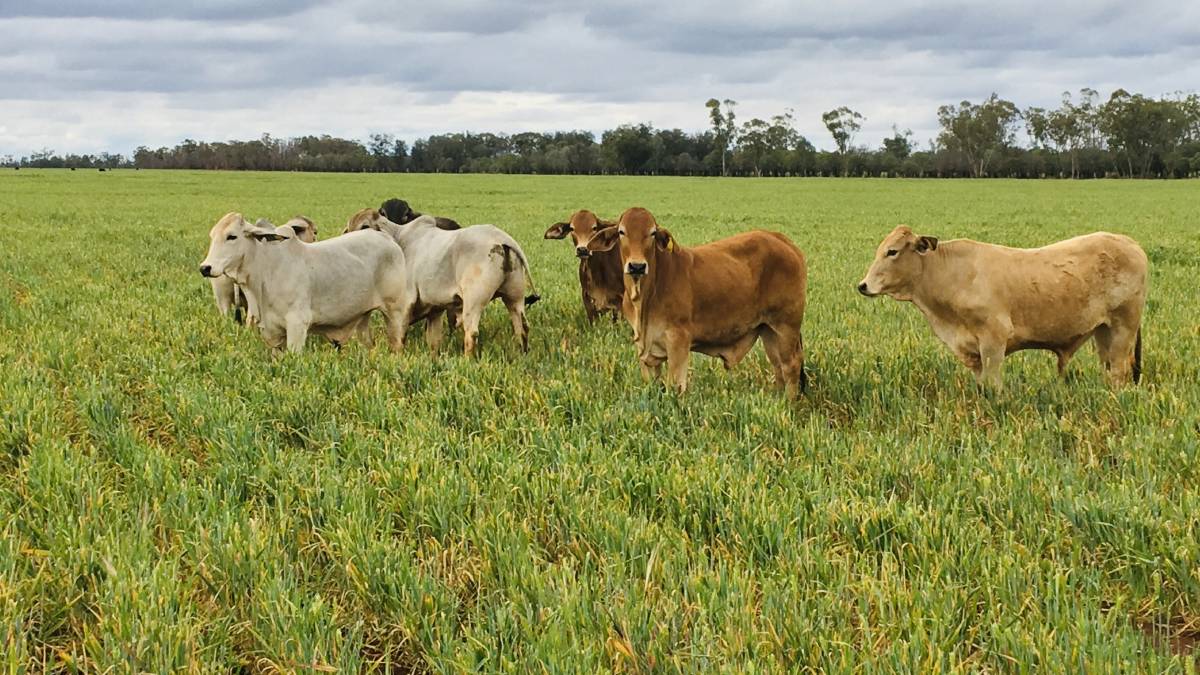 Cattle have gone into a variety of country and forage crops, including oats, oats and clover, rye and natural grasses.

Mr Kennedy said the cattle had all handled their new surroundings well and the buyers were happy.

"These cattle went into a variety of country and forage crops, some went straight onto oats, oats and clover, rye and natural grasses."

When the subject turns to monetary value, Mr Kennedy was quick to point out the 'perfect storm' that was created with the collision between the seasonal break for many producers and the seasonal reopening of the live export market.

"As you'd expect, these buyers were having to compete against the boat money, so if you like, they were paying a premium for these cattle," he said.

"Demand was extremely high and values were matched by the demand from both Queensland and interstate; huge numbers of these cattle would have normally gone to live export but this sudden surge in demand saw these cattle head south.

"This in turn has also had a flow-on effect for the boat cattle values, with buyers having to source their product elsewhere."

One of the many NSW producers that took the opportunity to access some of the massive influx of these cattle from the north were Mungindi district graziers Phil and Karen Tonkin, Nilgie Park.

Covering just over 24,000 hectares, the Tonkin Farming aggregation is 40 kilometres west of Mungindi and the Tonkins are very happy with their new additions.

"Cattle got very dear down here after the season broke. We have a 2000 head feedlot and background cattle off grass to enter and finish in that facility," Mr Tonkin said. 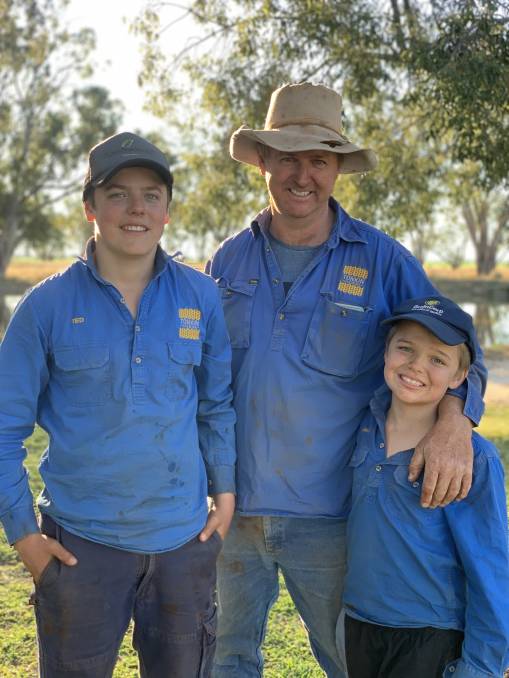 Phil Tonkin, Nilgie Park, Mungindi with sons, Ted (left) and Max (right) have had their hands full with the arrival of cattle from North Queensland.

"The biggest problem we face is purchasing large lines of cattle, these northern regions and the larger lines of Brahman and Brahman-cross cattle are ideal for our situation."

"We engaged our agent, Peter Prosser, to source cattle and we ended up purchasing 560 steers from two vendors, 384 from one station were Brahman and Brahman-cross, with the remaining 176 head from another property being straight Brahman."

The cattle are destined for the heavy Jap Ox market and will be processed through the Kilcoy Pastoral Company Abattoir, Kilcoy, after a 100-day feed.

"We produce a 560 to 650kg body and they're terrific for that purpose; they're just really hard to go past at the 100 day job, particularly in summer."

"They can be a very profitable exercise," he said.

"We bought these cattle with the freight component in mind, they're still more profitable than buying smaller, varied lines from down here."