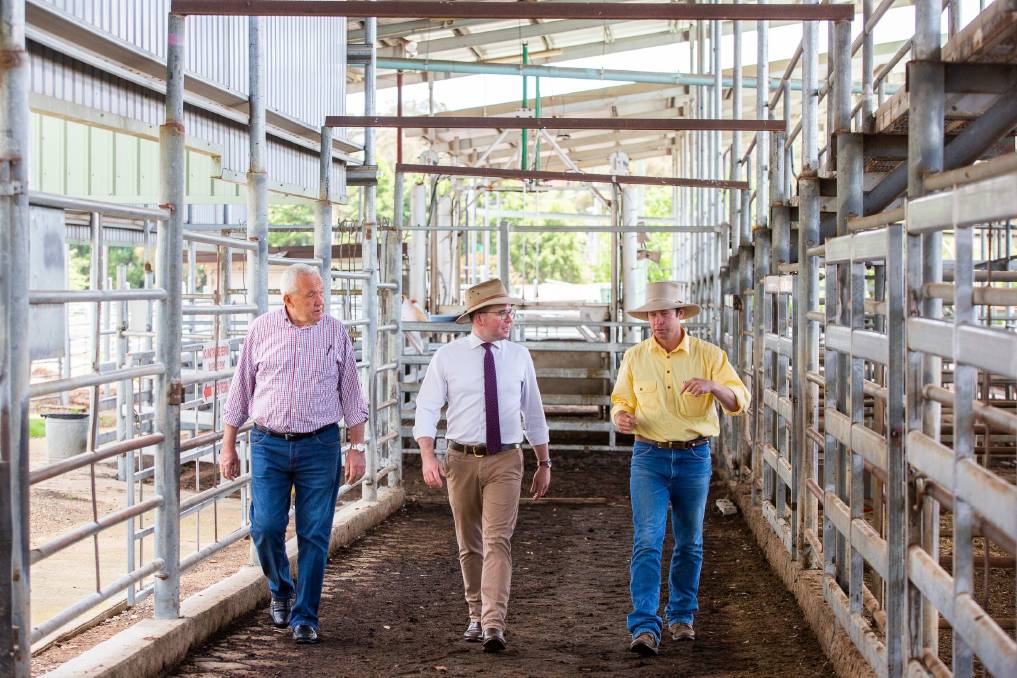 Armidale and Guyra saleyards have secured $5 million for upgrades from the Bushfire Local Economic Recovery Fund.

NEW England graziers are being urged to take advantage of the saleyards on their door step rather than transporting prime stock to Tamworth following the announcement of a $5 million upgrade to facilities at the Armidale and Guyra saleyards.

Northern Tablelands MP and NSW Minister for Agriculture Adam Marshall announced funding had been secured for the significant redevelopment during a visit to Armidale saleyards yesterday.

"If cattle graziers in outlying areas like Walcha know they are going to consistently get high prices selling at nearby Armidale, they will be more inclined to send their stock there, instead of Tamworth," Mr Marshall said.

Council said the upgrade would be undertaken in a staged process, so as not to affect regular sheep and cattle sales.

The project will be jointly funded by the NSW and Commonwealth Governments.

"This is just the type of big picture infrastructure which both Armidale and Guyra needs to rebuild their drought, bushfire and COVID-19 effected economies," he said.

"By capitalising on both town's strengths in agriculture, these upgrades will ultimately result in new and greater opportunities to market livestock, facilitating the growing appetite for online selling."

Mr Marshall said each year Guyra and Armidale saleyards inject more than $72 million into the local economy selling an average of about 300,000 sheep and cattle.

"Today marks a turning point for livestock producers in the Northern Tablelands, with this redevelopment set to deliver improved livestock handling facilities and increased buyer competition for vendors," he said.

At Armidale saleyards the money will be used to replace and extend the cattle holding yards, renew its cattle weighing scales, increase the amount of vehicle parking and refurbish amenities and offices.

Environmental sustainability was also part of the plan with the installation of a system to harvest water from the large existing roof.

This water will be used in a truck wash-down reuse program.

Solar panels will also be installed to lower power costs on site.

All the old timber sheep yards and loading races will be replaced with steel at Guyra saleyards and the onsite amenities and kiosk facilities will be refurbished.

"Heavy-vehicle access will be improved with works to be undertaken on internal and external roads," Mr Marshall said.

"Increasing the holding capacity and improving access will make these yards some of the highest quality in northern NSW, attracting the best stock, biggest buyers and highest prices for farmers."

Mr Marshall acknowledged Armidale Regional Council and the New England Associated Agents for the plan they presented to the government.