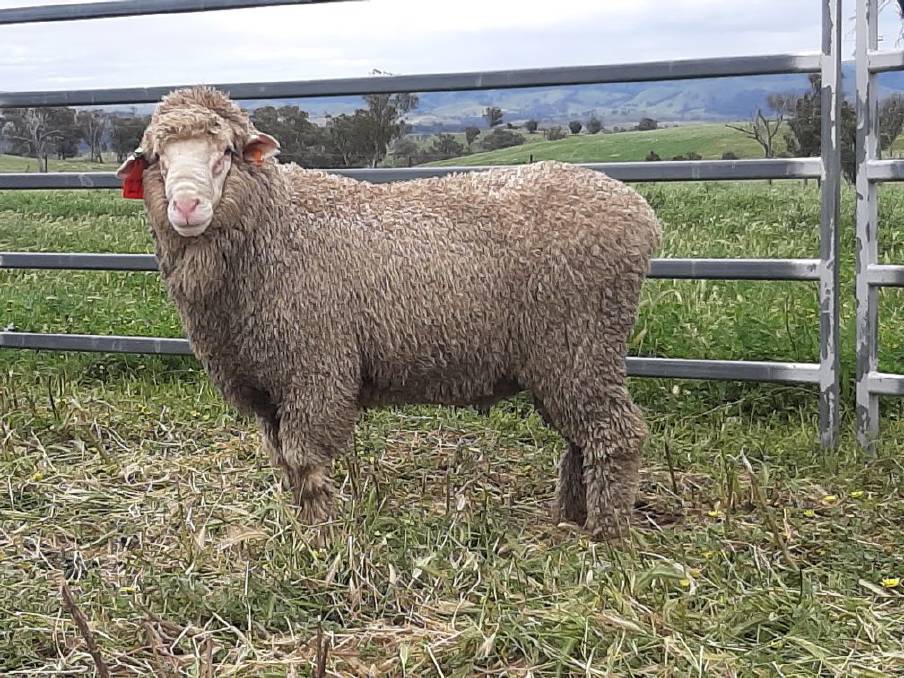 Rain poured down on the day, a fitting representation of the season, with the Southern Tablelands stud recording 35 inches so far this year.

Carrabungla's Ben McIntosh said this had meant the sale team had been out in all weather.

"They weren't housed so they've been out in it all, but their wool was still nice and bright," Mr McIntosh said.

Mr McIntosh said the poll ram was sired by a Willandra Carrabungla cross and had 19 micron, a standard deviation of 2.8, coefficient variance of 14.7, comfort factor of 99.9 and greasy fleece weight of 100 per cent.

"His figures appealed to us too," Mr Hewitt said.

"We're chasing that lower SD with that sort of micron."

The Hewitt's bought a total of four rams on the day for an average of $3231.

Mr Hewitt, who has been purchasing from Carrabungla for more than 10 years, said they finished shearing earlier this month and managed to hit the market just as it jumped, achieving an average of 1097c/kg and $1912/bale.

The volume buyer of the day was Pineville Pastoral Company, Crookwell who purchased six rams to a top of $3000.

While, BA and FA Abbey, Crookwell took home five rams for top of $2250.

Dave Ward from Bungonia bought four lots to a top of $3250. As did Laggan locals, The Diamond Pastoral Company, for a top of $2500.

There were also some new clients in the mix, including Warwick and Anne Blackwell, Walbrath who managed to come away with the second highest priced ram, which sold for $4000.

On the other end of the spectrum were long term Carrabungla breeders, the McDonald's of Aberdeen, Laggan, who have been purchasing from the stud for 20 plus years.

Mr McDonald, who bought three rams this year for a top price of $3000, said the Carrabungla genetics suited their breeding direction.

"They fit with where we're heading, they have nice soft wool and are good doing sheep, not too strong in the micron but they cut a lot of wool," Mr McDonald said.

The McDonald's finished shearing their 2500 sheep last week and managed to cut 13 more bales of wool this year.

"Every sheep we had, including 600 hoggets, averaged 6.1 kilograms for 18 micron wool," Mr McDonald said.

"I was very happy with that considering they didn't have a very good start to the year."

The sale was conducted by Australian Wool Network, with Mick Laing taking the bids as guest auctioneer.