Capeweed is nominated by many growers who attend our field days as one of their most troublesome winter spring weeds. 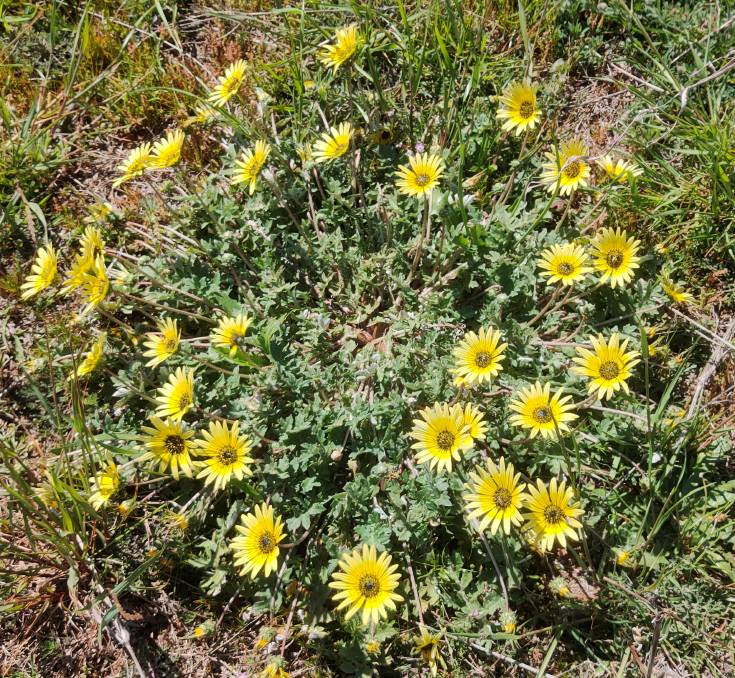 Capeweed (image taken in early spring this year) can cause large yield declines in crops as well as pastures if not adequately controlled.

Capeweed is nominated by many growers who attend our field days as one of their most troublesome winter spring weeds. It is a particularly aggressive grower, can crowd out valuable pastures like various winter legumes, as well as can be very competitive in crops.

Control strategies depend on many factors, including level of infestation and spread across the property, arable or non-arable, and if farming is part of the system. Where infestations are small, and relatively localised, as is common in new weed infestations, eradication is an option. In our case eradication is our aim. While the property was free of capeweed, over the past three years, a small infestation, probably resulting from being washed in or accidentally imported via vehicles (even ours), or maybe via purchased livestock, or even via birds.

Whatever the control strategy, it is important to appreciate there can be significant levels of "hard seed" in capeweed populations. "Hard seed" means not all seed of a species germinate in the year following seed set. In many species like capeweed with "hard seed", some seed can remain viable in the soil, but not germinate, for more than two years after seed set.

Therefore, for good long term control, or eradication, total prevention of seed set is required for at least three consecutive years. One missed control year and weed populations can quickly return to pre control levels. One capeweed plant can set over 4000 seeds.

As for most weeds, an integrated control approach involving several strategies is best for elimination or good control. On arable land cropping provides excellent opportunities to eliminate capeweed, although reinvasion is always likely from adjoining areas. However, reinvasion is commonly slow allowing for spot treatment before populations rebuild.

Herbicide weed control in a cropping cycle can begin via glyphosate treatment at the beginning of the fallow in spring prior to converting from pasture phase to cropping phase. It is important to treat before flowering has progressed far and before moisture stress sets in. That's one year's total prevention of seeding from the state of the cropping phase.

A number of good herbicide in-crop or pre-sowing options exists for crops like cereals or canola. Options are less in legume crops. Roundup Ready varieties, for example canola, allow for in-crop use of glyphosate. In cereals terbutryn, often with products like MCPA in cereals but not canola or other brassica species (e.g. grazing types), provide a good spectrum of weed control including capeweed.

Part of good capeweed control in crops is also dense healthy ones. An herbicide escaped capeweed, for example a late germinating one, will set very little seed if the crop is extra competitive and has got well away before the weed gets going. Aspects like timely sowing, good sowing rates, closer rows and good soil fertility are very important for crop competition.

Herbicide control in pastures has fewer options, as many herbicides usedin crops can damage legume pastures. Those safer on pastures are commonly less reliable and/or are more expensive. Examples of registered herbicides of use in some legume pastures include bromoxynil and 2,4-DB. While MCPA is used at low rates in a spay/graze strategy, it can damage legumes like sub clover and if a dry late winter spring follows, recovery can be retarded.

Even more so than in crops, an important strategy for capeweed control in pastures is dense aggressive pasture growth. Having the best winter legumes for a given soil type and a variety with the best maturity fit of a given area, plus one with good levels of "hard seed" is critical. No factor for aggressive legume growth is more important than high soil fertility.

A perennial in the pasture in addition to winter legumes, for example in our case tropical grass Premier digit, adds to spring moisture competition against weeds like capeweed. One cape weed plant can set thousands of seeds, with some likely to remain viable in the ground for three years. Control programs need to factor in residual seed. Part of controlling weeds like capeweed is strong pasture competition such as this tropical grass and winter legume mix.