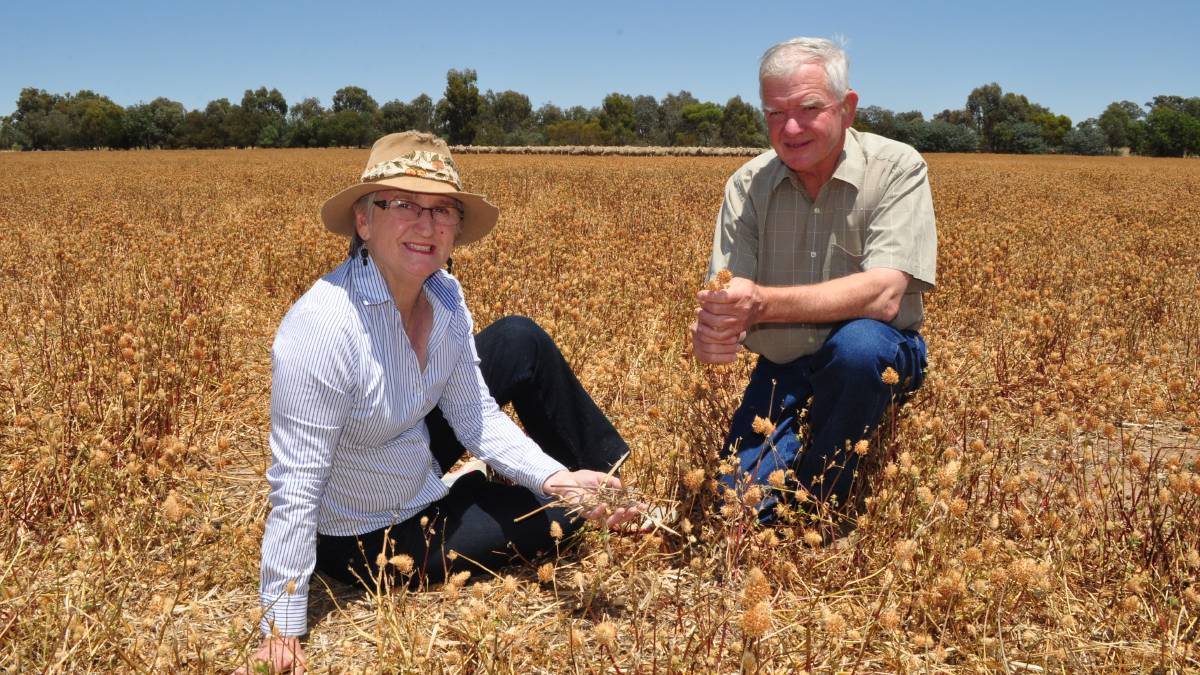 Alison and Peter Campbell in 2012 with a clover cover crop among wheat stubble being grazed by Merino ewes.

A focus on ground cover in the Campbell's sheep and cropping business has put them in good stead to adjust to unforseen changes in their lives.

IN THE eight years since being crowned the 2012 NSW Farmers of the Year, Peter and Alison Campbell have noted many changes in their business.

At the time of their win, the Henty farmers were running a mixed cropping and sheep enterprise with a focus on maximising financial performance while managing natural resources.

The couple were cropping two-thirds of their 1550-hectare farm as well as running a Merino self-replacing flock.

Then, just as the business seemed to be humming along, a debilitating illness caused a major interruption to their plans.

"When we won the award everything was on track for an uneventful future and a seamless move into retirement," she said.

"However, an incredibly serious illness with our daughter Ainslie affected where we lived and what I now had to do, which led us to do a great deal of awareness raising about myalgic encephalomyelitis/chronic fatigue syndrome (ME/CFS) and preparing for a 'worst case scenario' in our family."

"When Ainslie, who was working as a vet, developed chronic fatigue sickness we had to rethink our plans," he said.

Mrs Campbell said it had been a challenging few years, but Ainslie was now able to cope with day to day living.

To ease the workload, the Campbells have moved to Henty and sold a 500ha block to a neighbour, leaving them with 1550ha.

"We also arranged for share farmers on two other blocks which meant our cropping program was reduced by half," Mr Campbell said. "But we still run 2600 Merino ewes with followers."

Yet, they have been able to stick with some of their long-term principles, such as Mr Campbell's belief that stubble retention in a medium rainfall environment should be a long term industry goal.

They also include a pasture phase for carbon/nitrogen benefits and aim to have an intensive cropping rotation and to demonstrate high yields can be coupled with full stubble retention and they benchmark in the local crop competitions, regularly finishing in the top three places with their main crops of wheat, canola and lupins.

Their Merinos, meanwhile, are Pastora blood and through wether competitions have been benchmarked for their productivity.

Pastures on the eastern Riverina property are lucerne based with sub and arrowleaf clovers, while perennial grasses including phalaris, tall fescue and perennial ryegrass are sown in some paddocks.

"Summer rain has meant hairy panic and bindiieyes have become an increasing problem and the challenge is to maintain competitive pastures," Mr Campbell said.

Further challenges were caused during the recent drought years when Mr Campbell said stress was an issue as decisions needed to be made each day, for example with water shortages, but he realised there were others a lot worse off.

"Grain and stock sales meant that income was maintained, however, very little stubble hay was made as we needed to maintain groundcover."

That was an important consideration for the Campbells as they endeavoured to preserve the integrity of the topsoil of their property.

Over- and under-storey tree plantings for environmental benefits and an enjoyable work environment have also been a focus.

Otherwise, except for a scare when a galah shorted itself on a power pole and started a fire in February, neither bushfires or COVID-19 have impacted the business.

As for their foray into the Farmer of the Year competition in 2012, Mrs Campbell recalled the benefits they accrued during that phase of their farming careers.

"We were proud to be able to tell our story at the time and to showcase both our farm and our area," she said.

"It did make us develop a few new skills about self-promotion and it was a privilege to have welcomed the judging panel to our farm."

Sponsored by
The oldest surviving brewery in Australia has sold, with residents keen to find out what the future holds for the heritage listed property.
Test
New Year's Day tradition no more due to safety concerns.
Test
More rain this past week has meant renewed flood alerts for several regions across the state.
Test
Test
Previously it was rare to find women in the shearing sheds, but nowadays they make up a large percentage of the workforce.
Test
Fighting to learn to shear, after not being allowed to learn, Val Byers says she now has finally got some respect from her work mates.
Test
New COVID mutations are a concern because they could help the disease evade the body's immune response and make it more transmissible.
Test
It was the first time the Maddens had sold Border Leicester rams, and they cleared all along with all Poll Dorsets.
Test