Lloyd Polkinghorne, editor, farmer, photographer, will take to the road this month, plying 300 kilometres on foot from Barham to the Hume Dam. AT 36 years of age, Lloyd Polkinghorne has weathered more than his fair share of hardship.

Multiple fractures of his back at 17 was followed by a brain injury after a shotgun exploded while scaring birds from a neighbour's rice crop.

During the millennial drought things were pretty tough on the home farm Boondilla, part of a 2830-hectare mixed irrigation family farming business, and Lloyd, the third generation of his family in line to farm it, qualified as a diesel mechanic after finishing school.

He was well respected, earning an executive position on the board of RiceGrowers, the representative body for rice farmers across Australia, and involving himself heavily in native environment groups.

It was a quiet day on the job at a Victorian earthmoving dealership when Lloyd found himself facing a "hazing" initiation.

Walking along the banks of the Victorian side of the Murray River, Lloyd hops down over the edge to show how badly the river's banks have been eroded.

While doing some maintenance on the workshop's roof, workmates removed the ladder he climbed to get on the roof, telling him to 'find his own way down'.

Fate intervened and Lloyd found his own way down alright, falling three metres through a polycarbonate skylight, landing on a pile of tractor counterwights stacked below.

When he made contact his back bent unnaturally, breaking a vertebrae and six lateral processors.

Despite being injured early in his apprenticeship, Lloyd finished to get his ticket, but being a diesel mechanic long term was unrealistic - "let's face it, everything is heavy when you're dealing with big diesel engines," said Lloyd.

So he managed Boondilla with his father and drove headers up around Moree and Gunnedah with friend Dave Crawford.

"It was a bad year for birds," says Lloyd, "we were scaring birds off a rice crop and they took off and landed on the neighbour's place".

It's common courtesy to help your neighbours move birds on.

"The shotgun just let go in my face."

What followed was in Lloyd's own words "a brutal couple of years".

When he tried to do anything much he'd start vomiting and migraine headaches would cripple him.

Continual doctors' visits yielded little in the way of remedy for his condition.

Then cerebral spinal fluid started leaking down his throat and he was hospitalised for four weeks. The 18 months after that were tough.

"I put on 50 kilograms in 18 months," says Lloyd. And much of his time was spent in a dark room with earmuffs on.

With that came depression, anxiety and post traumatic stress, technicolour dreams of his children dying and not being able to save them, nightmares brought on by his condition.

It was during this time the ABC's Landline reported his struggle and by chance a Melbourne viewer saw it and immediately got in touch, reckoning they shared the same condition.

It was a breakthrough.

His pituitary gland, manager of the body's hormones, was damaged.

"I was missing growth hormones, had the testosterone levels of a 97 year old and my thyroid was barely working," he said.

"I'd sheared off white matter from my brain's frontal lobe."

Before the accident Lloyd had bought into Boondilla, but was "taken out of the equation" when it came to managing the farm.

His brother Adrian came home to the farm from Cairns, where he'd been working as a builder after leaving during the millennial drought.

"That drought was tough, we weren't evening getting seed back", said Lloyd.

"But it's nothing compared with the destruction of the government's water policy," he said.

Today Lloyd still has to take it easy at times, he moved into Koondrook, on the Victorian side of the Murray River opposite Barham, and hormone replacement, yoga and meditation have all been part of managing his condition.

"You've just got to grab the bits that work for you," he said, "I'm not one for sitting still". When the Barham Bridge newspaper came up for sale Lloyd bought it.

It was then the severity of water policy hit home.

"I'd meet devastated farmers, their farms and the environment ruined," he said.

Lloyd reckons he's about 85 per cent of his former self and this month will take to the road, walking the 300 kilometres from Barham to the Hume Dam beginning on November 11, talking to people about water policy and its affects.

He's aiming to walk 20km early each day, pulling up about lunchtime.

He's building a trailer that will follow his support vehicle and carry a bar that will be parked in or near towns and people will be invited to have a drink and a yarn.

Lloyd laments the shift from an holistic approach to managing water to one that has an accountancy slant.

He said the Southern Basin had always been metered and farms including Boondilla were limited to a maximum of four megalitres irrigation to the hectare across the entire farm.

"So rice will use 12M/ha and that means you can't irrigate everything.

"New developments such as the almonds will take 15ML/ha, but you talk to people working with them and they reckon they go north of 20ML/ha," said Lloyd.

He reckons creating an open market has made for cutthroat competition for water that has reduced Australia's food security.

Both dairy and rice find the sums difficult once water costs more than $200 a megalitre.

And that's if there is an allowed allocation.

Having grown up along the banks of irrigation schemes fed by the Murray River, Lloyd reckons the irrigation canals have for the past 70 years been among the best wildlife corridors in the state.

He said 15 years of community engagement in the Southern Basin had uncovered many little-known facts about the river system, but they didn't 'rate' because they did not mesh with the Murray Darling Basin Plan's targets.

He scoffs at claims South Australia's Lower Lakes were ever more than an estaurine system.

"That science is fraught with errors, they're holding the lakes at between 500 millimetres and 800mm above sea level, how is that natural?"

"We have a legitimate problem here, the Basin Plan was supposed to be based on the triple bottom line and they've buggered all three."

He said the authorities seemed to have taken a divide-and-conquer approach to managing community engagement.

"There's just too much at stake to get this wrong," he said.

As we walk in the Gunbower Island State Forest, Lloyd points out areas that have been the subject of environmental watering for the past seven years. 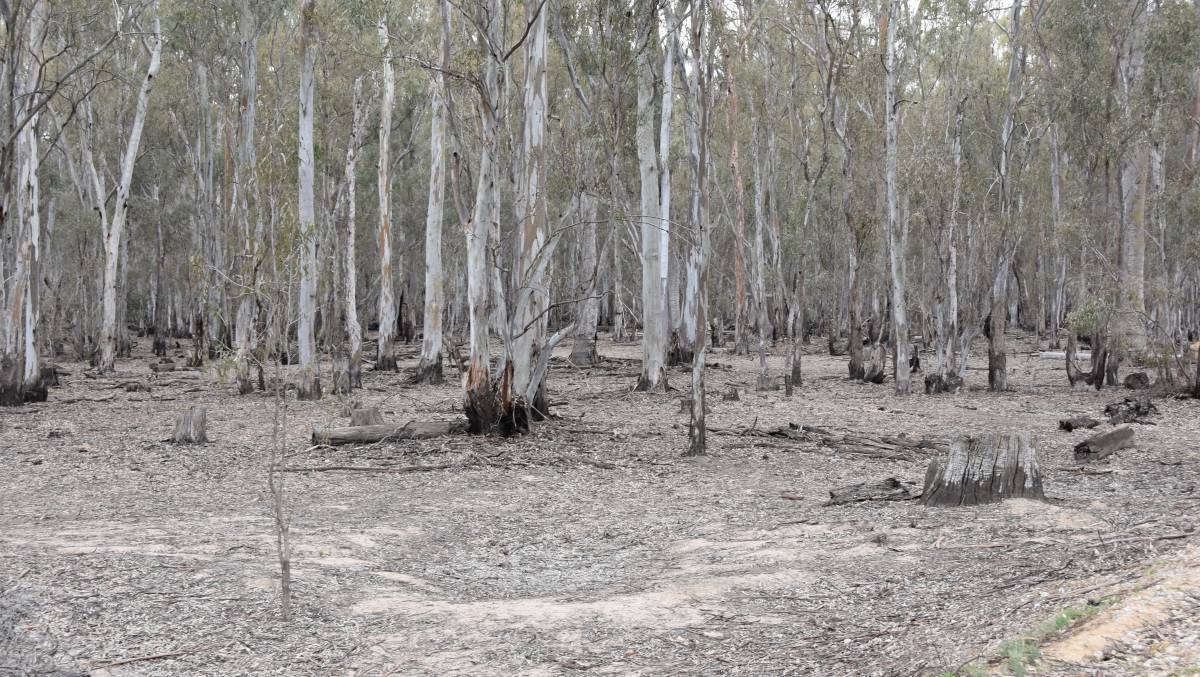 Country that has been environmentally watered looks poor.

It is a grey dead zone, with no grass, not even weeds. Watered country on the left and closest the Murray River looks poor compared with the unwatered zone on the other side of a gravel track.

On the opposite side of the track the unwatered country is verdant and having a good year. While the unwatered country seems verdant in comparison. This and the two photos above were all taken within a minute of each other.

He used socially motivated grants for local sports clubs as an example.

"Our farm used to grow a paddock of rice for the footy club, some farmers would donate seed, others chemicals or the harvester, when communities are buoyant they look after themselves," he said.

"I like a painted silo, but where's the benefit?

"It doesn't put kids in the schools or players at the footy club.

"You've got salt-of-the-earth people doing their own jobs, making submissions to government, talking to government on its terms, while also running their businesses and they're not being listened to.

"It's an abusive relationship," he said.

Before Lloyd begins his walk there will be a pubs and clubs event this Friday and Saturday at Moulamein and late night shopping in Barham-Koondrook on November 10.

He aims to finish on November 28 at Hume Dam.