Cows with calves sold beyond expectation at the Maitland Annual Spring Female sale. 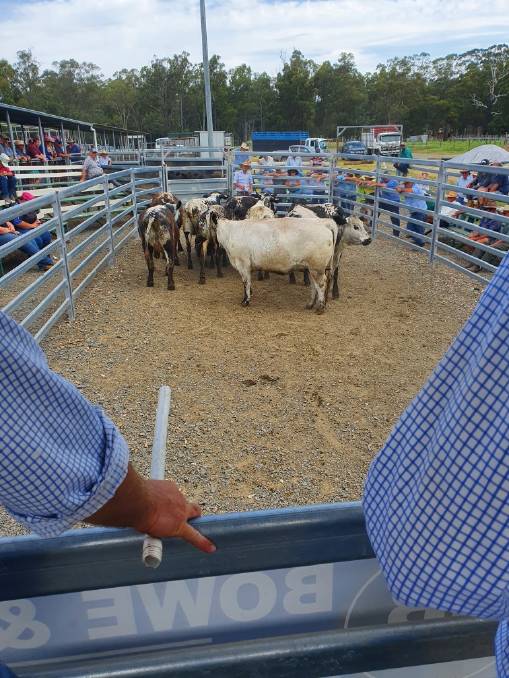 Buyers line the rail of the recently constructed selling ring at Maitland saleyards during a store cattle sale last month.

COWS with calves sold beyond expectation and hit a market top of $4050 a unit at the Maitland Annual Spring Female sale at Maitland saleyards last Saturday.

Bowe and Lidbury agent Michael Easey, Gloucester, said the quality of the cattle offered was very good and the better seasonal conditions means females were in demand.

He estimated the cows with calves were as much as $250 dearer than recent strong store cattle sales at Maitland.

Overall the market trend was dearer for all categories offered.

The buyer competition was also far reaching with people attending the sale from as far south as Albury, but also Forbes, Dorrigo, Mudgee, the North West, Upper Hunter, and the local area.

Unjoined heifers from 12 to 18 months attracted solid competition from restockers and sold from $1600 to $2250.

Most PTIC heifers were $150 dearer.

Boambee Angus, Seaham, sold excellent quality Angus cows with calves for $4050 to the Brown family of Clarence Town. These cows sold for the top price of the market.

Wallabrook Charolais, Hinton, sold a line of unjoined 12- to 14-month-old, Rosedale-blood Charolais heifers for $2250 to D and B McNamara, Lower Belford.

Ambiad Pty Ltd, Maitland, has a complete herd dispersal and its cows with calves averaged $3360 and topped at a pleasing $3750.

The sale was conducted by Bowe and Lidbury, Maitland.