Battalion stud at Dundee have sold embryos in their top producing female.

A four-year-old Speckle Park cow has sold more than $100,000 in progeny this year after four of her embryos made $5050 each on Friday. The joining of Battalion Heartbreaker M1(pictured above) with JSF Unmarked 2D has already achieved some high price progeny with embryos making $5050 each on Friday.

It was that proven genetic combination with JSF Unmarked 2D that had the phone of owner Grant Kneipp ringing off the hook as Speckle Park breeders enquired about future embryo sale opportunities.

At the Scone sale four embryos to a different bull made $1900 each but Mr Kneipp said he had at least a dozen people wanting to get their hands on the Unmarked/Heartbreaker cross. A $30,000 heifer from the same breeding as the embryos pictured with Grant Kneipp. Photo: Battalion stud

He expected the four embryos and three guaranteed pregnancies would attract at least $3000 each when listed in a multi-vendor stud sale on AuctionsPlus through agent Nathan Purvis from Colin Say and Co.

The popular cow was being flushed every six week and producing as many as 20 embryos each time.

"We will offer more up," Mr Kneipp said.

"Ideally we would have held on and put more up later on but we thought to give people an opportunity this breeding season we would put one lot on AuctionsPlus and run the gauntlet."

Buyers Tony and Liz Sutcliffe of Toebelle Speckle Park at Duns Creek were one of the breeders eyeing off the $30,000 Heartbreaker P6 female but walked away from that sale empty handed.

Instead they will look to breed with the matching embryos in autumn.

"We were patiently waiting in anticipation hoping the vendor would offer embryos," Ms Sutcliffe said. 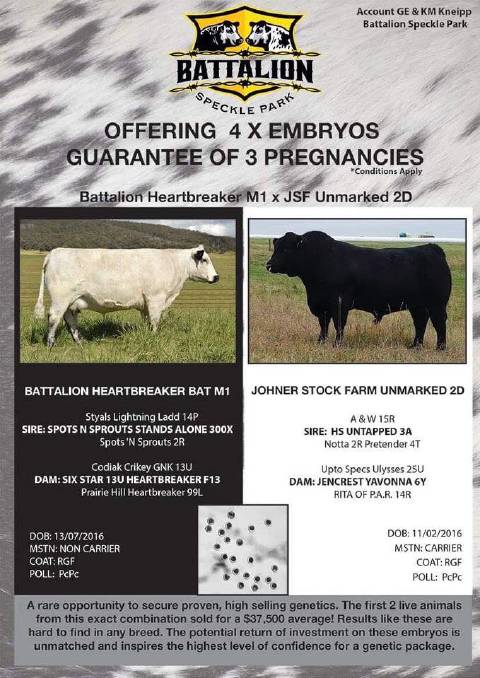 "I really liked the Unmarked sire. We had plans to use him in the next program but I just really liked that combination, that breeding really, really appealed."

Dundee-based Battalion already have another bull calf for Scone next year with the prized female staying within sight of the main house.

"She is only rearing her second calf so she really hasn't had much opportunity to show what she can do but she has certainly proved with the few she has done," Mr Kneipp said.