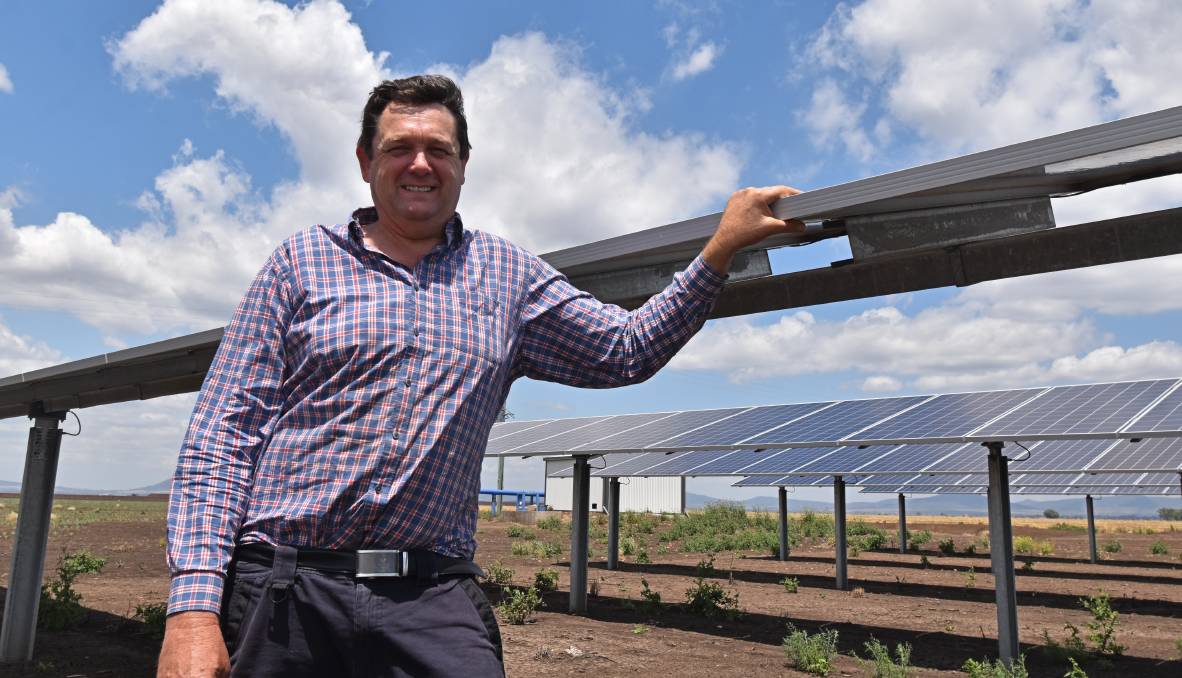 A BACKGROUND in renewable energy engineering and a desire to operate his farm in a more sustainable way lead Scott Morgan to rethink the way he does things.

In 2017, the Gunnedah farmer began to examine alternative ways to power his multi-crop property and drive down his energy bills.

"I decided to take the bold step and import one of my own systems, which was the first of its kind in the North West that tracks the sun to power my bores," Mr Morgan said.

"It was quite a risk because it was the unknown, but I was pretty confident given my background in renewable energy engineering that I could make it work."

He said the biggest challenge was not having anyone to ask advice about powering high-energy consumption irrigation bores.

Since investing in solar-powered bores, Mr Morgan said his energy overhead costs had been slashed.

"It's nice to know on a sunny day I'm completely grid independent for up to 10 hours.

"The idea has taken off a little bit because a major solar company approached me and I think they've rolled out six or seven systems in the past year across the district."

Spring rain has boosted Mr Morgan's prospects in the form of a full soil profile, enabling him to plant cotton and sorghum ahead of the summer season, and will also harvest irrigated durum wheat and dryland canola.

"We are trying to be as efficient as we can be and we've been really fortunate to get some good rain this year to fill up some of our storage dams," he said.

"However, allocations are still quite low, so it is comforting to know there is a cost-effective way of ensuring we can still produce.

"To me, the big question a farmer should always ask themselves is 'does the return warrant the investment?', and in my opinion this one certainly does." Solar-powered bores are just one of the sustainability measures Mr Morgan has implemented, along with new cropping programs such as no-till cotton and the exploration of power storage.

"I have put in provisions for power storage, but I just want to wait because technologies are changing that quickly and I don't want to choose the wrong storage," he said.

"I think more and more farmers are looking to make the switch to renewable energy because of the opportunities to lower overheads and because I think it is the way the industry is heading.

"Powering your house or your bores is just the beginning. There is scope to power equipment too, but like all things my biggest suggestion to anyone would be to do your research and go in with your eyes open."

A decision to not harvest a 2019 winter barley crop for the benefit of groundcover may have been a masterstroke by Mr Morgan.

Spring rain has provided Mr Morgan with a full soil profile and the additional groundcover has paved the way for him to plant 90 hectares of no-till irrigated sicot cotton.

"I hadn't really done zero-till or no-till farming before and when it was time to do something with the barley last year, I thought I'd give it a try," said Mr Morgan (pictured with emerging sorghum).

"I think it will allow us to cut back on spraying because an added benefit is that it was planted in the heavy groundcover from the previous irrigated barley crop.

"It is only a third of our total cotton, but I will be very interested to see how it goes."

As well as the prospect of a strong cotton crop, the conditions have also filled Mr Morgan with hope for his pioneer sorghum.

"We haven't really had much of a chance to plant sorghum over the past couple of years due to the drought and limited groundwater allocations," he said.

"However, it's looking pretty good this year."