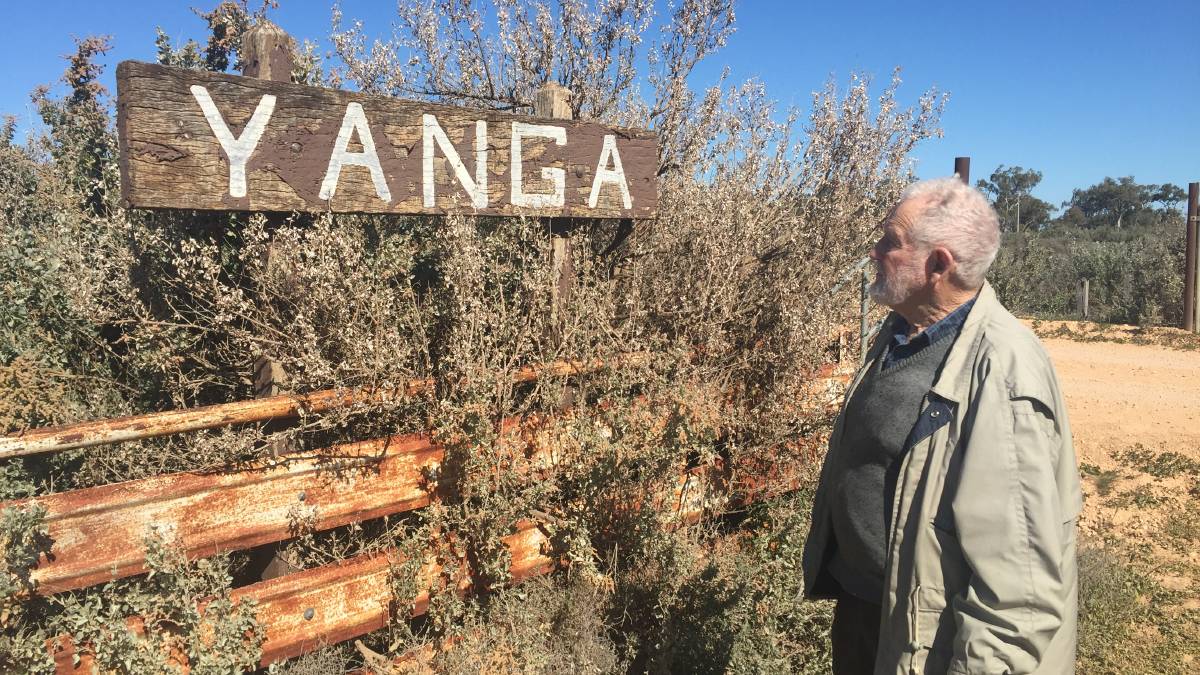 Alastair Cox admiring the sign to Yanga he erected over fifty years ago.

The history of legendary pastoral icon Yanga Station is being researched by former manager Alastair Cox. 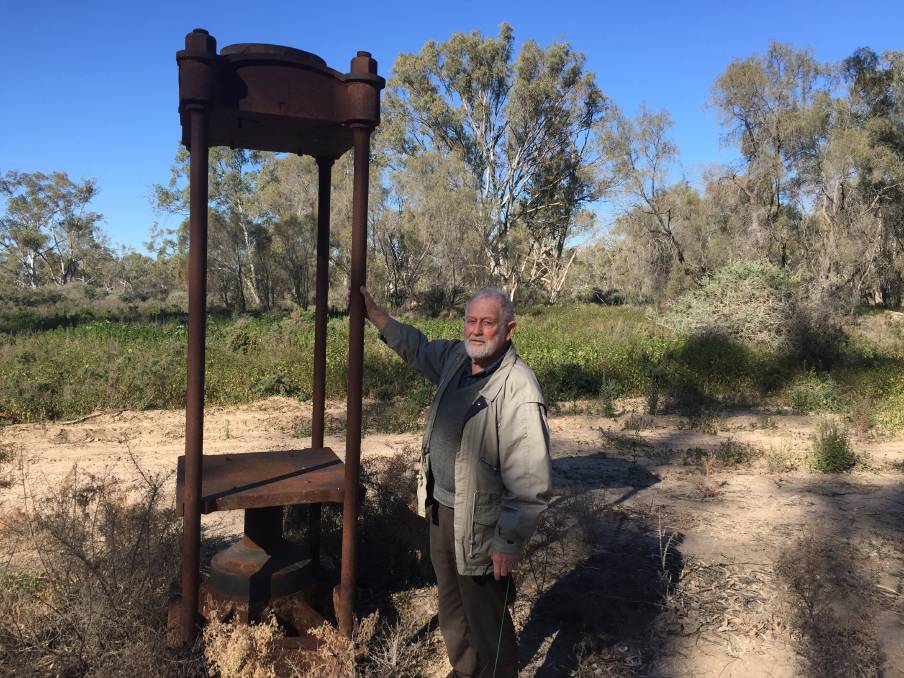 Alastair Cox with the old wool press at Woolshed Bend camping area on the Murrumbidgee River.

It was not surprising Alastair Cox pursued a pastoral career.

The descendant of Merino pioneer William Cox who established the first land grant in the Bathurst district after crossing the Blue Mountains in 1814, he is very proud of his Merino heritage.

Subsequent generations of the Cox family established themselves as leading Merino breeders in the Mudgee region: and Alastair's direct forbear James Cox made Tasmania his home at Clarendon, near Evandale.

Upon leaving school, Alastair started work in the Newmarket saleyards in Melbourne where he was employed by the agency Dal Adams and Co.

From there he moved to the Riverina as jackaroo on Austin Wanganella, the legendary Merino stud then managed by Tom Austin.

Three years on that property gave Alastair sufficient confidence to further his pastoral experience in Queensland and he secured a position on Darr River Downs, Longreach.

He started as a jackaroo but very quickly became the overseer upon promotion to management of the incumbent.

At the time, Darr River Downs was shearing 30,000 sheep and Alastair recalled it was wonderful experience with big mobs and large areas.

"It took over an hour to count them!"

The biggest mob I ever counted was 9,300 - Alastair Cox when overseer on Darr River Downs, Longreach, Qld.

In 1962, Alastair returned to the Riverina when he had successfully applied for the position of overseer on Yanga, at the time a major pastoral holding near Balranald and with a 170 kilometre frontage to the Murrumbidgee River.

He was to spend the next 38 years on Yanga, reputed to be at 80,000 hectares, the largest freehold property in Australia.

In 1972, he succeeded to the management upon the retirement of Fred Carter who held that position since the 1940s and whose great-grandfather James had served as stud groom for owner and pastoral magnate, Charles Brown Fisher (commonly referred to as C.B. Fisher), during the late nineteenth century.

The station has an amazing pastoral history and featuring names such as William Charles Wentworth, Thomas Mort, Charles Brown Fisher and Sir Arthur Sims among the owners.

All would be known to students of Australian pastoral history, but Alastair Cox has set himself a mission to record the heritage of the property and its place in the canon of Australian sheep stations.

During the golden century the wool industry enjoyed in Australia, Yanga was one of the sheep stations which contributed to the national wealth and self image.

At its peak, upwards of 100,000 sheep were shorn each year after grazing an area stretching from the Murrumbidgee River in the north to the Edward River in the south.

Such an enormous spread generated its own myths and Alastair has been painstakingly looking into the recorded and anecdotal history, including his first-hand knowledge.

A feature of the property is the homestead which was built by 1872, when a travelling journalist noted 'a fine spacious building constructed chiefly of Murray pine'.

Overlooking Yanga Lake, the homestead is today noted as one of the few remaining buildings constructed using the drop-log process and still in wonderful condition.

Sited on a sandhill which points south into the lake, it must be one of few such buildings from which the sunrise can be viewed over water.

And by dusk, sitting on the western verandah the sun can be seen setting over water.

Other buildings of note include stables, stock yards and the impressive shearing shed built after 1896 when fire destroyed the original shed.

It was not proved the fire was deliberate, but it did occur during a period of great unrest in the wool industry, with shearers striking for better conditions and pastoralists refusing to meet them on equal terms.

That heritage and infrastructure is now being conserved by the NSW National Parks and Wildlife Service following the gazetting of Yanga National Park in 2007, and part of the wider Murrumbidgee Valley National Park.

The purchase of Yanga in 2005 by then NSW state Labor government was not wholly welcomed by the Balranald district nor indeed the rural community in general.

Locking up a well managed pastoral operation and letting nature take its course was not seen by many in a favourable light.

"I think it just set a shock wave through the rural world when they heard Yanga was going," Alastair recalled.

Nonetheless, Yanga is in public ownership and the National Parks are serious in encouraging people to visit.

It is a unique property, with extensive wetlands, redgum forest reserves and Aborigine heritage; and that is why Alastair Cox is keen to record its history for posterity.