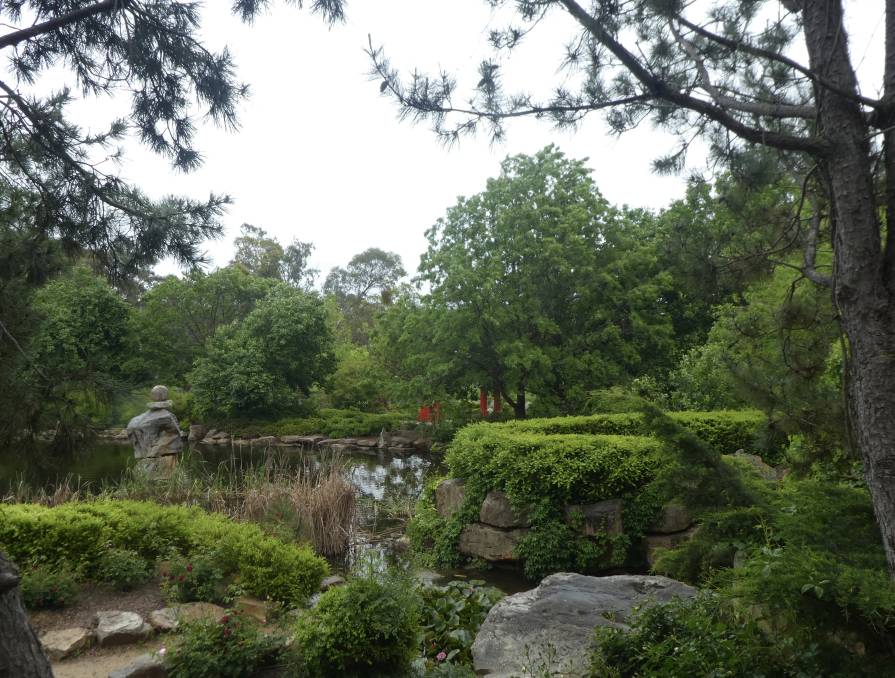 A large lake forms the heart of the Chinese Tribute Garden at Lambing Flat, near Young.

Having visited Japanese gardens at Dubbo and Cowra recently, I thought it was time to enlarge my Asiatic gardening horizons and take in a Chinese garden.

Having visited Japanese gardens at Dubbo and Cowra recently, I thought it was time to enlarge my Asiatic gardening horizons and take in a Chinese garden.

The garden was begun in 1992 but its origins reach back to the earliest days of settlement in the region.

When gold was discovered at Lambing Flat during the summer of 1860, people hurried to stake their claim from all over the world, including America, Europe and China.

As many NSW residents know to this day, water is essential when mining gold to clean the ore, so two German brothers, Hermann and Johann Tiedemann built a dam near the gold fields and water channels to carry water to the diggings.

Tensions often ran high in early mining towns and in the early 1860s the Chinese community were twice attacked and expelled from the area.

Both times they were rescued by a nearby landholder, James Roberts of Currawong, who courageously let them stay on his property and provided shelter, food and clothing for up to 1,200 people.

The Chinese miners and their families survived the riots and stayed on.

In 1870 they took over the dam from the Tiedemann brothers and later, when the railway came to Young, their dam supplied the water for the steam trains.

A footnote to the story tells us that from 1888, Young municipality paid for the railway water to be used for a steam powered lighting plant.

As a result, Young became one of the first towns in the then colony of NSW to have electricity in its houses and streets.

In recognition of the local Chinese community's contribution to Young - and that of the wider Chinese community to Australia - Young Rotary Club undertook to establish a Chinese garden on the land alongside Chinamen's Dam that the Chinese crossed when fleeing for their lives in 1861.

A new pond was dug to represent a lake, surrounded by rocks brought from nearby Boorowa.

Grottoes, pools and small bridges were added to create a 'stroll' garden round the lake, designed for visitors to pause and admire the different aspects of the landscape as they come into view.

Water lilies embellish the lake, together with stone statues, a water wheel and a bronze galloping horse, a copy of one excavated from a Han dynasty tomb in Gansu, China.

Since the garden was created, the surrounding trees and shrubs have grown and it is now completely hidden from its surroundings.

Driving in, the only hint that a large garden exists nearby is a bridge, leading to scarlet painted Chinese entrance gates (brought from Taronga, Western Plains Zoo in Dubbo) and a pair of classic stone lions.

The lovely garden beyond totally captures the essence of a classical Chinese garden.

With its man-made structures and its trees, flowers, rocks and water, it represents perfectly the ideal of man and nature existing in harmony.

Picnic and barbecue facilities are available at the site.

For enquiries phone The Lambling Flat Chinese Tribute Garden on 02 6382 3394.