Colin Harper has spent 10 years improving his soil health and now avoids the use of chemicals and fertiliser.

Ariah Park sheep producer Colin Harper is proving regenerative farming can be a road to profitability.

"It knocked me for six," Mr Harper said of the sale result.

Mr Harper avoids using chemical and fertiliser in his cropping and first cross sheep enterprise, and has been focused on improving his soil health and biology for the last 10 years - embracing weeds, cutting out Roundup use all together and forgoing drenching and vaccinating.

The only handling of his sale-topping ewes, which were some of the heaviest in the draft at 85kg, was having their ear tagged, tail docked and wool shorn. 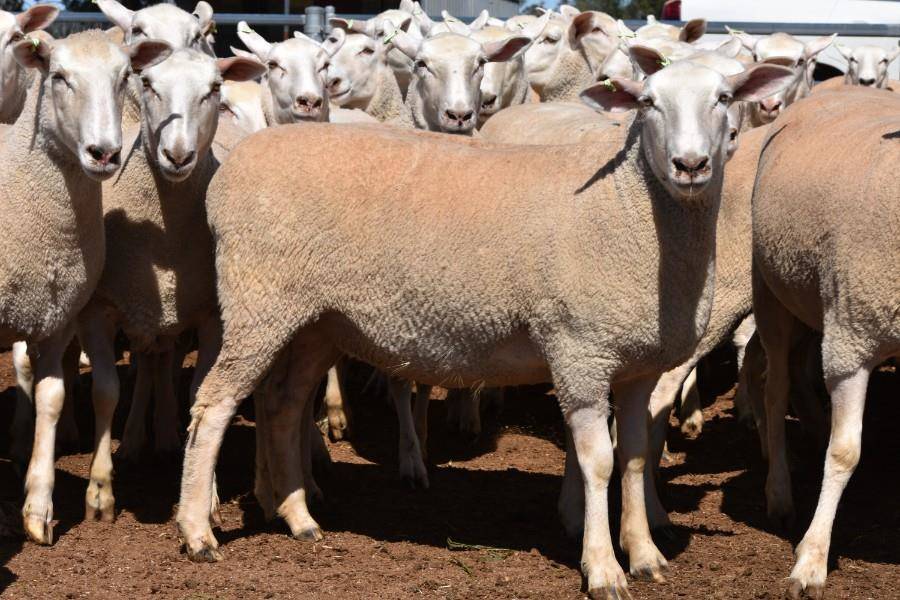 "The wether portion goes to the Wagga Wagga saleyards and the ewe portion have been sold at the Corowa first cross ewe sale for around 10 years now," he said.

"I like the first cross operation because you've got two lots of lambs to sell, plus good Merino wool.

"It spreads your income, your risk, your feed load and your workload."

Mr Harper had a lamb marking percentage of 120 per cent from his 2000 breeding ewes this year.

"I lambed them at one-year-old this year, which reduced the percentage a bit but that's worked out financially well," he said.

His farming philosophy is that plants feed your soil biology and your soil biology feeds your plants - arguing that this process shouldn't be interrupted by feeding the soil fertiliser or using chemicals to kill off undesirables.

"If we feed the plant (with fertiliser), the plant doesn't need the biology, so the biology doesn't multiply and dies-off," Mr Harper said.

"Then we kill the plants with chemicals or cultivation, leading to bare paddocks and the biology is again reduced.

"I took on the concept of looking after your soil biology, feeding and stimulating it with plants whenever you can and keeping it covered and protected."

A multi-species mix was sown into a grass/pasture base this year.

Mr Harper said while he used to rely on soil tests to see the changes, now he could visually see the improvement, both in his paddocks and his sheep.

"If you've got your biology feeding your plants, then your plants are full of nutrients and every mouthful the sheep takes is quality feed."

He believes this even extends to weeds and said he has found Patterson's curse, Capeweed, Prickly Lettuce and Hogweed to all be beneficial.

"This year, I sowed what I call a farmer's mix - wheat, oats, barley, peas, lentils, all put into my pasture base of clover, grasses and every other weed you can think of," he said.

During the drought Mr Harper avoided feeding out grain and has recently decided to stop feeding hay as well, instead looking into a barley-sprouting shed to provide a stop-gap in dry periods.

"It's hard work for sheep to digest grain, it's high in starch and they only get about 40pc of the value out of the grain," he said.

Meanwhile, loose salt and sulphur is given to the sheep to help keep external parasites away, replacing the use of drench and reducing the need for flystrike treatments.

"While, with flystrike I thought I was on a winner last year and didn't Click anything, but this year we have had some so we've been giving them some Click as we're weaning."

"When you're doing this sort of stuff, you're out on your own, out on a limb, you don't get a lot of support and it takes a lot of courage to stick with it. It is good to be rewarded," he said.