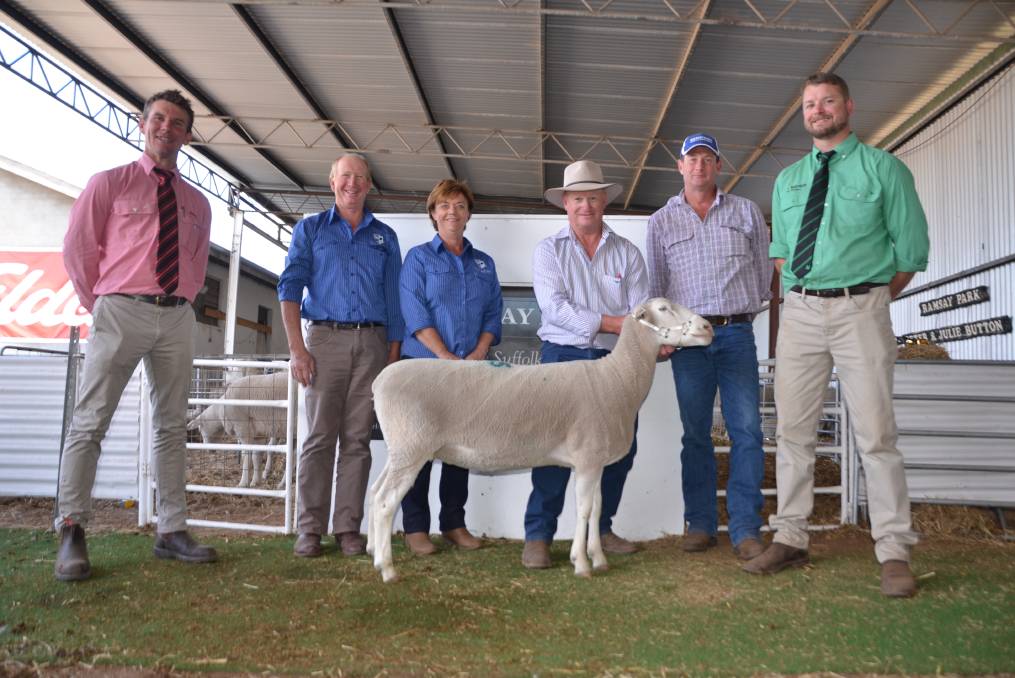 Achieving a world record price for a White Suffolk ewe overshadowed any mixed emotions at Ramsay Park stud's first stage ewe dispersal on November 6 at Minlaton, SA, after a ewe reached a top of $5100.

ACHIEVING a world record price for a White Suffolk ewe overshadowed any mixed emotions at Ramsay Park stud's first-stage ewe dispersal on November 6 at Minlaton, SA after a ewe reached a top of $5100.

The "impressive" ewe was offered at the back end of the White Suffolk sale, offering a surprise when it was knocked down to buyers Ian Gilmore, Oberon, and Anthony Hurst, Lucindale, SA.

Stud principal Peter Button's "head was spinning" when the record was made.

"It just blew me away - we had no idea that she was going to do that," he said.

Part-owner Ian Gilmore said the ewe will be used in an embryo transfer program.

"This will be the first time using their genetics but we have been watching their progress for many years," he said.

The Gilmore's secured a further four ewes, averaging $1920 across the five.

The $3600 second-highest price was made twice, with lots sold to Woolumbool stud, Naracoorte, SA who secured another lot at $2500, and Detpa Grove, Jeparit, Vic, who bought five in total, averaging $2280.

The Branson family at Mortlake, Vic, were operating online and put together an impressive draft of ewes and took home 22 to $3500, averaging $1145.

"The impressive ewe topped the day off," he said.

The stud also offered 45 Suffolk ewes to a top of $1200, averaging $835. The top price ewe was an August 2019-drop that sold to Brett Stokes, Tasmania, who secured a further two rams, averaging $1033 across the three.

Clovaville, Wollomombi, was the volume buyer after making the final bid on 14 ewes to $1000, averaging $821.