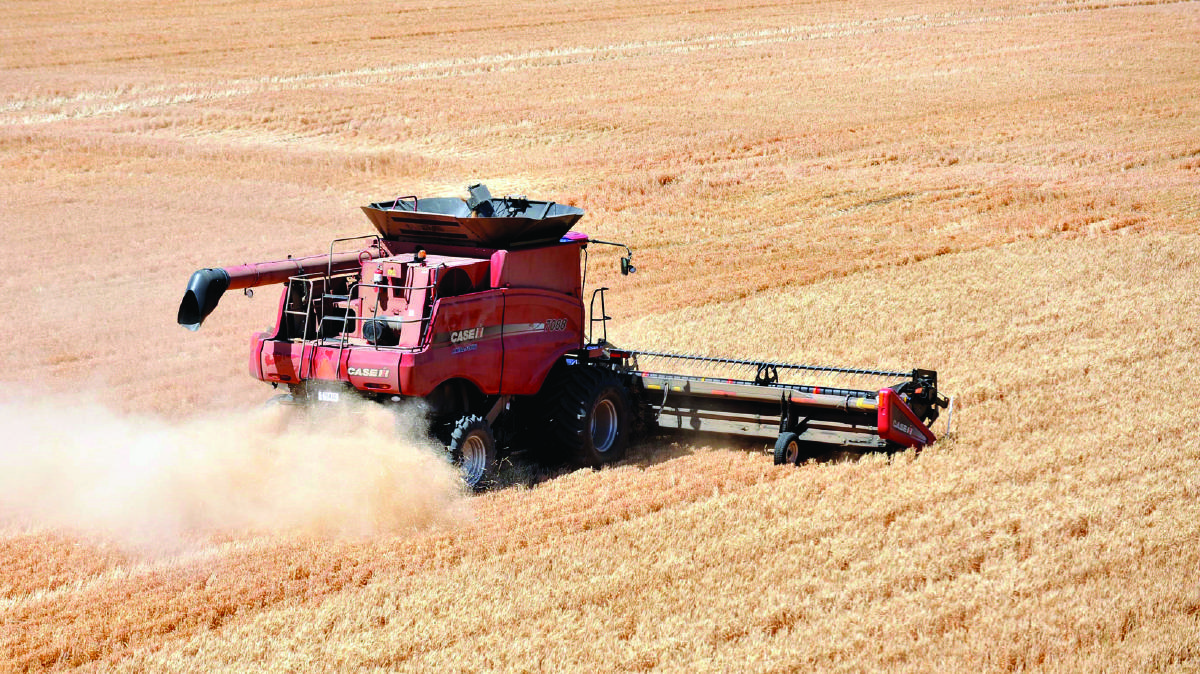 As the winter crop harvest rolls-on in Argentina, poor yields are expected to reduce exportable surpluses and may open Asian market opportunities for Australian growers.

Poor crop yields in Argentina are reducing its grain production and opening markets for Australia.

The weather woes afflicting Argentina's cropping regions this year have been extensive and look set to worsen in December, with the La Nina weather phenomenon running at its strongest level in almost a decade.

Many areas of Argentina have been in a moisture deficit since March and the spring rains have been very sporadic, which is seriously impacting winter crop production and the summer crop planting program.

There has been a troubling trend across Argentina this year that is very familiar to Australian farmers.

The weather forecasts have not been matching reality.

The expected rain has not been turning up for the dance, and the dryer-than-usual pattern is expected to slow the Argentine summer crop planting program.

BAGE estimates 28.8 per cent of a total projected soybean area of 17.2 million hectares has been sown to date. This is up from 19.9 per cent planted a week earlier, but still 2.5 percentage points behind last year's pace.

Conversely, the seeding of this season's corn crop in Argentina has stalled.

This is due to the extremely dry seedbed and a reluctance by growers to plant during November to avoid flowering in the peak of summer.

Moisture permitting, seeding will resume in earnest in December and the total planted area is forecast to reach 6.3 million hectares this season - down from 6.5 million hectares in 2019-20.

But many parts of the country remain woefully dry, and it is believed that some of the early sown row-crop fields in the driest regions will have to be replanted when soil moisture levels improve sufficiently.

BAGE estimated the Argentine corn crop was 31.4 per cent planted as of November 19. This was virtually unchanged from 31.2 per cent a week earlier, but well behind last year's pace of 46 per cent.

The corn area planted to date is rated 10 per cent poor, 55 per cent fair and 35 per cent good to excellent. But a moisture top-up is urgently required.

The first phase of corn planting in Argentina typically sees about 45 to 50 per cent of the crop planted by early November.

With less than a third of the crop now in the ground, the question is what will farmers do come December?

Will they continue with their original corn area intentions and plant more of the lower-yielding late crop?

Or will they swing some corn area across to soybeans?

It seems several local analysts are expecting the latter.

But corn does have a later planting window than soybeans. So, if November and December remain dry - and widespread planting doesn't resume until January - it could easily swing the other way.

In terms of production estimates, the United States Department of Agriculture (USDA) has pegged the Argentinian soybean and corn crops at 51 and 50 million tonnes, respectively.

Meanwhile, Argentina's winter crop harvest is progressing slowly and early yields are abysmal as a result of the extremely dry growing season - particularly in the northern provinces.

As of Thursday last week, 19.8 per cent of the forecast wheat area had been harvested. This was up from 15.5 per cent a week earlier.

The yields improved slightly week-on-week, from an average of 1 to 1.2 tonnes per hectare.

But with a planted area of 6.5 million hectares, there needs to be a dramatic recovery in yields if final production is going to get remotely close to the BAGE production estimate of 16.8 million tonnes - let alone the USDA's 18 million tonne forecast.

The balance of the harvest will need to average almost 3t/ha just to make the BAGE figure.

The wheat crop is currently rated at 17 per cent good to excellent, 40 per cent fair and 43 per cent poor to very poor.

The deteriorating state of the crop throughout the growing season is clearly evident in the 'Wheat Crop Condition' graph, below. 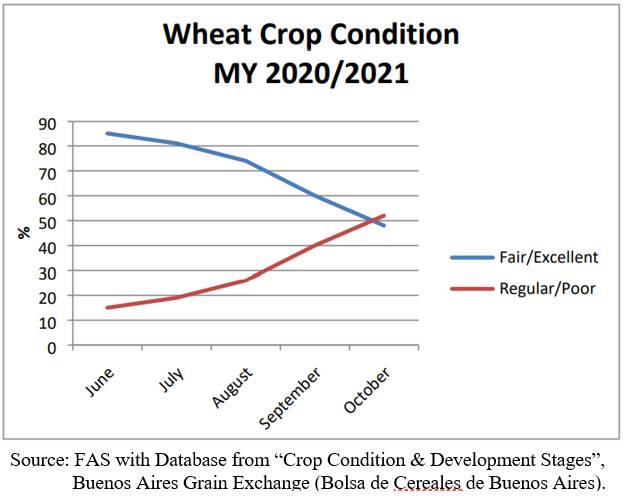 The Argentine barley crop has largely escaped the effects of the drought, as it is mainly planted in Buenos Aires province and the eastern reaches of La Pampa province.

Soil moisture levels have been quite favourable during the season, which may well lead to higher than average yields - if the kind conditions continue through to harvest.

Smaller production areas further north in Cordoba and Santa Fe provinces are, similarly to the wheat, in generally poor condition.

BAGE has forecast Argentine barley production 3.7 million tonnes, which is slightly higher than the latest USDA estimate of 3.5 million tonnes.

This is down from 3.8 million tonnes last year, but that output was from a significantly bigger planted area.

A smaller wheat crop means export offerings out of Argentina will be much reduced in the 2020-21 season.

And, at current prices, it is hard to see the Republic finding much demand outside of the Mercosur region.

China is reported to have been purchasing barley of different qualities, including fair average quality (FAQ), which is used for malting.

But, other than China, barley export sales outside Mercosur block members will also be minimal.

Argentina has been a persistent seller into Asian markets in recent years, driven by a search for new demand for its burgeoning exportable surpluses.

But the smaller crop and higher prices virtually eliminate this country as a competitor in the 2020-21 marketing season.

That leaves Australia as the sole aggressive seller into Asia at the moment.