The first sod was turned on Friday. 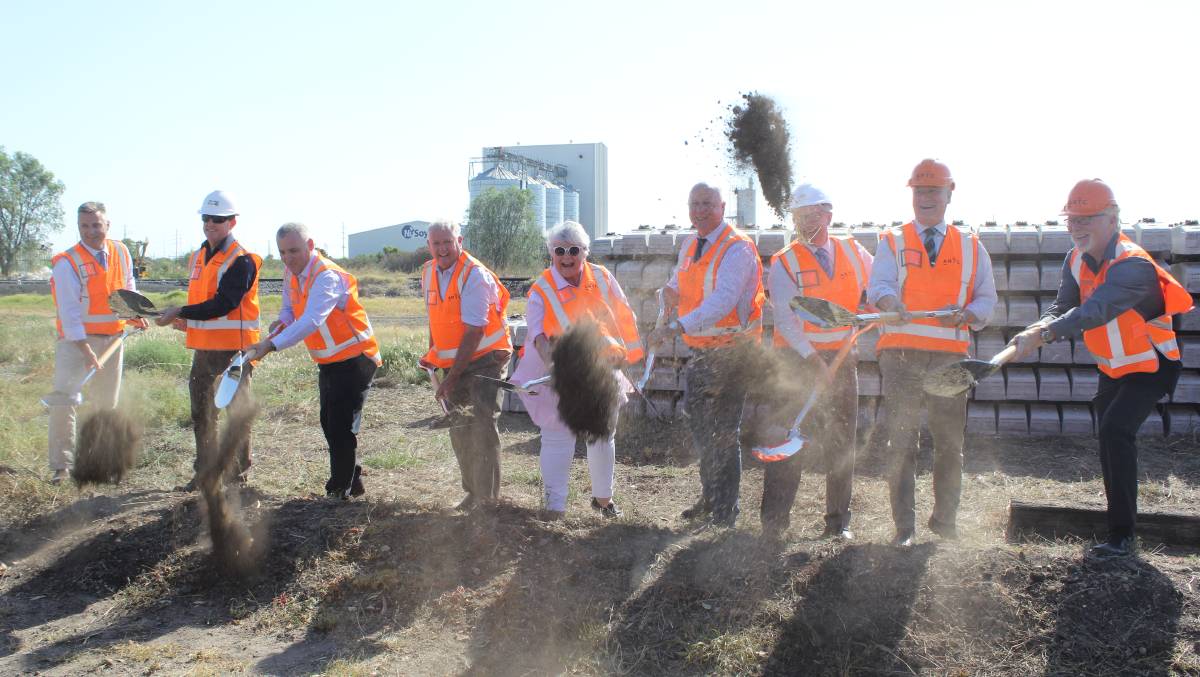 After years of talk, the Inland Rail is finally on our doorstep.

The first sod of soil of the $693.8 million Narrabri to North Star project was turned in Moree on Friday, marking the start of up to three years of construction along the 171 kilometre stretch of rail line.

"This is a momentous day," Deputy Prime Minister and Minister for Infrastructure, Transport and Regional Development Michael McCormack said in Moree on Friday.

"This is one of the largest and most complex sections of the Inland Rail because it's a working rail line.

"This is the second of 13 sections of this nation-building, nation-transforming project."

The first section of Inland Rail between Parkes and Narromine was completed this year, which saw more than $100 million spent with local businesses and created nearly 700 jobs for locals.

Mr McCormack said the Narrabri to North Star project will deliver 500 direct jobs, not to mention the hundreds of indirect employment opportunities.

It will also deliver millions in economic stimulus to north western NSW.

"The $693.8 million construction effort on Narrabri and North Star brings immediate stimulus to the regional communities of Narrabri, Bellata, Moree, Croppa Creek and North Star and those townships in between," Mr McCormack said.

"In real terms, it means more money spent locally, more money spent with local, regional and Australian businesses at the same time as building an asset that will benefit our nation for generations.

"This is going to generate confidence ... it will create jobs, create opportunities and that is what the Inland Rail is all about."

Friday's milestone was a particularly proud moment for Local Member for Parkes and Minister for Regional Health, Regional Communications and Local Government Mark Coulton, who spoke about the Inland Rail in his maiden speech in parliament back in 2008.

"I'm incredibly excited about this," he said.

"As a mayor of Gwydir, I remember going to an Inland Rail meeting in Parkes in 2004.

"Inland Rail is one of the main reasons I got into politics, so today's sod turn is a very proud moment for me, and a key achievement for the Australian Government.

"It's a project that will open up eastern Australia for business and allow farmers to get their products to domestic and international markets, which is welcome news for the councils in North West NSW that represent a region rich in agriculture.

"Inland Rail is necessary to meet Australia's growing freight transport task for the next 50 years, and all levels of government are working together to leverage the long-term benefits of Inland Rail to attract new businesses to regional Australia.

"From the special activation precinct in Moree to Narrabri's Inland Port, private businesses and industry are setting up shop because they can see the long-term growth Inland Rail is bringing to these regional communities.

"No-one is prouder than me to see this."

Mr McCormack and Mr Coulton were joined by Inland Rail CEO Richard Wankmuller, ARTC CEO Mark Campbell, representatives from Trans4m Rail and the mayors of the three shires the Narrabri to North Star section will run through - Ron Campbell from Narrabri, Katrina Humphries from Moree and John Coulton from Gwydir - as well as Jamie Chaffey, mayor of outlying shire Gunnedah.

Moree mayor Katrina Humphries said this is a once-in-a-lifetime project and one that is set to see Moree boom.

"Every day is a good day in Moree, but this is even better. This is super special."

It is expected to reduce transit times for freight movements between Melbourne and Brisbane by rail to less than 24 hours.

Construction is now underway on phase one of the Narrabri to North Star project which involves the upgrade of 171km of track along the existing rail corridor.

The second phase will see the upgrading of 15km of track crossing the Mehi-Gwydir floodplain and building 2.3km of new track at Camurra, north of Moree. Further design work is progressing on the second package of N2NS construction which will see the preparation of an Environmental Impact Statement for the construction of new track between Moree and Camurra.

Inland Rail CEO Richard Wankmuller said the upgrades will allow for heavier trains on the track, which will increase efficiency come harvest time.

"You can get more out on a train, which allows more grain to come in, so it will greatly improve the amount of volume that can be taken," he said.

The pre-work for the Narrabri to North Star section has already begun, with the delivery of almost 25,000 tonnes of steel and more than 300,000 concrete sleepers and other materials.

Preparation works will continue until March next year when Inland Rail will get a possession strategy to start the upgrade works, working around harvest time in the region.

Earlier this month, Trans4m Rail was awarded the contract to deliver construction of the first phase of work, which involves the upgrade of existing rail line between Narrabri and North Star.

Next week, Trans4m Rail will be holding information sessions at North Star, Moree and Narrabri for locals to learn more about regional employment and supply opportunities.

Mr Wankmuller encouraged locals to reach out to Trans4m Rail to find out about what job opportunities are available.

"There'll be just about every type of job you can think of," he said.

"The cafe we had breakfast at this morning might need to hire someone, the local hairdressers might need to put more people on. There'll be construction jobs, truck drivers, safety workers, traffic control, surveyors, water trucks, we'll need signage companies, bull bars on trucks, you name it."

For more details about the Trans4M Rail information sessions, go to https://inlandrail.artc.com.au/events/?_event_project=705

The story Ground is broken on Narrabri to North Star section of Inland Rail first appeared on Moree Champion.