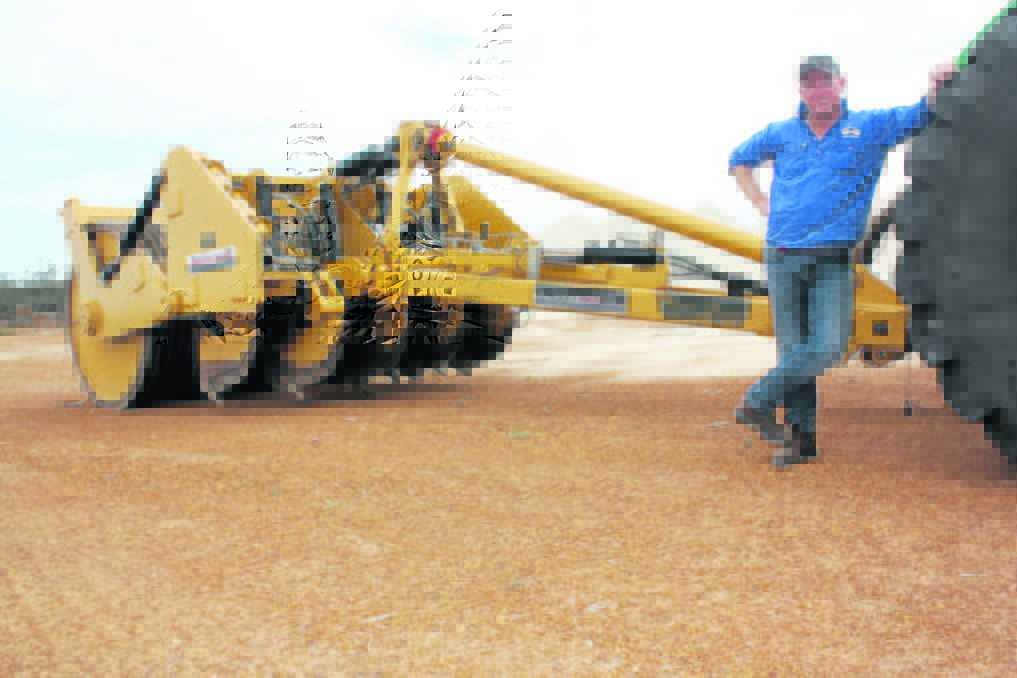 Having a limestone pit on your property is a big bonus but it can be a pain to access it using the traditional method of excavation. That's why Stott Redman decided to try his Rocks Gone H4 Reefinator on his limestone ridge.

HAVING a limestone pit on your property is a big bonus.

But it can be a pain to access the limestone using the traditional method of excavation.

Which is why Hopetoun farmer Stott Redman decided to try his Rocks Gone H4 Reefinator on a limestone ridge he discovered on his property.

The H4 is the hydraulic version of the original Reefinator and as it turned out he became the owner of the first model made by Cutts Engineering, Manjimup.

Mr Redman bought the Reefinator primarily to deep rip and destroy laterite ridges in the process, so he could then use a Nufab ripper to go deeper into the soil profile to access and bring up clay.

"We can do that now down to 600 or 700 millimetres in country where rocks are not a problem but we have big areas of laterite where we can't deep rip because of the rocks," Mr Redman said.

Stott and Charmaine Redman's property, Redman Farms, comprises between 8000 and 9000 hectares out of 15,000 hectares of gravelly sand over clay and he almost stumbled over a limestone ridge when he put down a post hole for a new strainer post.

"We found nice powdery white soil so we decided to test it," he said.

"We drilled 20 post holes to find out how big the seam was and got the soil analysed.

"It showed up to 86 per cent neutralising value as a raw product so we used a dozer to push off the surface, got an excavator, bought a screener from a mine site and processed 3500 tonnes of fine particles testing 55pc effective neutralising value.

"Plus we got another 3500t of extra aggregate material that could be crushed in the pit or used as road base."

With lime costing $36 a tonne ex-Esperance landed on farm, Mr Redman knows he will be saving money but he knows having his own lime pit gives him a bit more flexibility to try out a few ideas on the learning curve of life.

"Our pHs are OK through the soil profiles averaging about five but we are targeting anything under 5.5 now that we have the pit and we'll be spreading at a rate of three tonnes a hectare," he said.

"The Reefinator will help us get through the hard stuff and into the soft limestone where we can pick it up with a scraper bucket.

"It has taken us 10 passes to get down to a 300mm depth and we'll probably get to 2.5 metres before we stop and assess how we're going and how much we have left until the pit is exhausted.

"We probably will be doing between 1500 and 2000 hours a year swapping between the soil pit and working it on deep ripping." 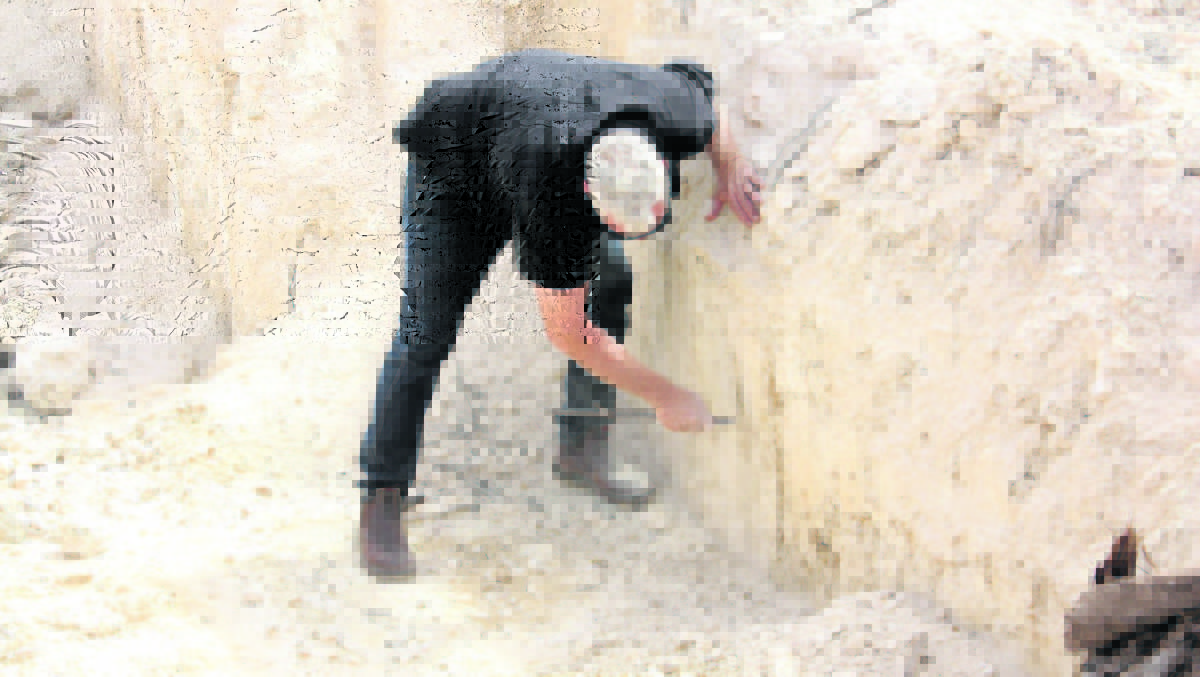 Rocks Gone sales manager (south) Darren Smith examines soft limestone underneath the cap. "Once the cap is taken off by the Reefinator it will be an easy job to excavate the lime sand," he said.

On the economics side, the Reefinator is costing between $120 and $140 a hectare per pass which is weighed against reducing future rock picking and rolling costs and potential yield increases of 1 tonne a hectare for cereals and 500 kilograms a hectare for canola.

The other bonus is that the Reefinator in the lime pit will be devoid of dozer push-up piles and will be a more efficient process with less aggregate produced.

And the gains will largely remain.

"I've been deep ripping for four years now and any ripping around the 300mm to 500mm zone will get you a yield increase," Mr Redman said.

"That really shows up in dry years and wet years."

The amount of residual benefit is always hard to judge but Mr Redman says it might be a "strategic rip" two years on "and that might just be after water-logging events.

"But it will be a learning exercise in terms of when we need to rip again," he said.

The whole exercise of reefinating and ripping opens up a lot of possibilities for Mr Redman.

"I think this helps us with our mindset," he said.

"If you think you can get through the dry spots you can adopt a more positive frame of mind and be more confident to manage inputs rather than baulk at potential risk and take a conservative approach.

"We are in a variable climate zone where it can be dry or very wet but that cost of variability can be managed better by what we're doing now."

He admits to having had a little trepidation being the first owner of the hydraulic Reefinator.

"But now I think it's more a feeling of relief that it's doing what I expected it to do," he said.

"It's reliable, there's no hassles, no spanners and it gets through stubble, smashes rocks, deep rips and leaves a good seed bed.

"We did 1200ha last year and on 20 per cent of the land it took two to three passes to get down to where we wanted at that 300mm sweet spot.

The H4 Reefinator is the result of a $1.5 million research and development program, involving more than 2500 hours of testing in a range of rocky soil types from granite, hematite to magnetite and sheet ironstone.

Designed by former Yuna farmer and Rocks Gone managing director Tim Pannell, it is considered the answer to working deeper in a wider range of rock types and hardpans, expanding applications unable to be achieved by the original Reefinator.

It also has been designed to work through stubble, with tynes set at 335mm spacings and opens up a whole new way of renovating paddocks for pasture and cropping.

"It's a primary ripper but is a completely new design from the original 300 Series Reefinator and we called it the H4 Series basically designating it's a hydraulically-operated machine, so there's no shear pins on the tynes.

"The four designates it's the fourth prototype model which we are happy to take into commercial production.

"There are four leading tynes and five at the rear with a new cable-suspended levelling blade that grates rocks sticking out of the ground and acts like a smudge bar before the tynes get to them, but the drum (which weighs 30 tonne when full of water) and the arms are the same as the original Reefinator."

The cable design was the preferred option to prevent undue stress on the hydraulic cylinders and the tynes are hinged on cast steel housing with a 55mm pin.

"The shear pin in the 300 Series had to be designed to break but you could get up to 22.5t before it broke," Mr Pannell said

"With the hydraulics you don't need the shear pin because it's a live action process with give and take."

The hydraulic system features a 32 litre accumulator designed to handle up to 3000psi pressure but Mr Pannell said the working pressure range was generally between 1000-1500psi.

All rams and pivot points are on spherical mostly greaseable bearings, specifically designed to be maintenance-free working so close to the ground.

"Pressure can ramp us quickly and with smaller hoses, oil can't escape fast enough from the cylinder," Mr Pannell said.

The H4 will dig to a depth of 450mm as opposed to the 200mm maximum depth for the 300 Series, with the ability to raise the front-leading rank of tynes to go deeper and quicker.

But you'll require a four-wheel drive tractor boasting a power rating in excess of 336 kilowatts (450 horsepower) or budget on at least 298kW (400hp) if you have a track machine.

According to Mr Pannell, wheels are better on rocky country, with working speeds between eight and 12km/h, depending on conditions.

Tyre pressure varies between eight and 13psi while a feature is the heavy duty "industrial" cushion hitch, designed to absorb harsh forces.

Force dissipation is inherent in most components. 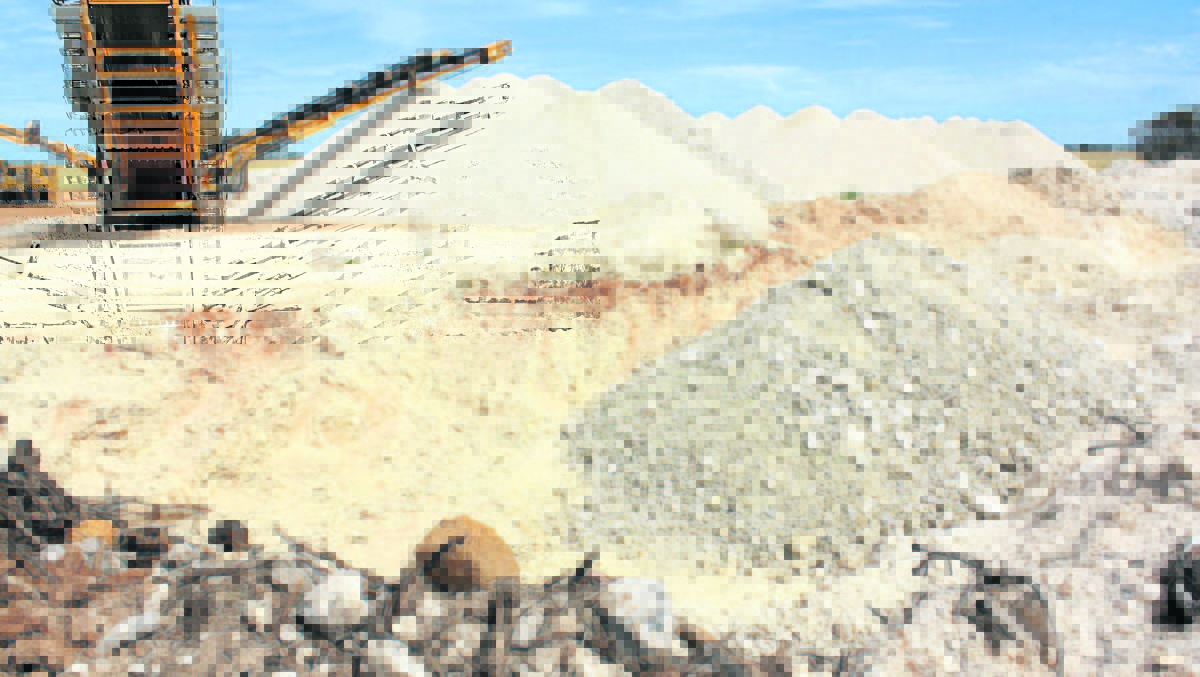 The traditional way of creating a lime pit (left) using an excavator and dozer, stands in stark contrast to reefinated land (right) from which limestone can be collected by a scraper and screened.

"One of the big advantages of this machine is that it smashes roots and during our testing the total number of roots I carted away would only have filled a ute tray," Mr Pannell said.

"This machine drags over anything because of the hydraulics and you don't usually need to ease the pressure.

"If you hit a blue granite rock, for example, the tynes just float over it as long as you haven't set the pressure too high and you just keep going.

"This makes a big difference in productivity because it's less jerky with almost no catching or dragging."

Mr Pannell said the H4 was also designed for road-building on mines or site preparation.

"Basically what you get is turning rock into gravel with our laterite rock or sandstone turning into fine gravel," he said.

"There already has been some talk that it could possibly replace drill and blast methods.

"We think so because the current method requires a huge prep and costs between $5 and $10 a cubic metre to do.

"We can do it cheaper with the bonus that material is already crushed.

"It won't work in all situations, like granite, for example, but I'm confident it will have a place, even if it's for surface mining applications."

A world patent-pending is in effect. Mr Pannell said the 300 Series was no longer in production.

The story Getting a limestone rip out of Reefinator first appeared on Farm Weekly.