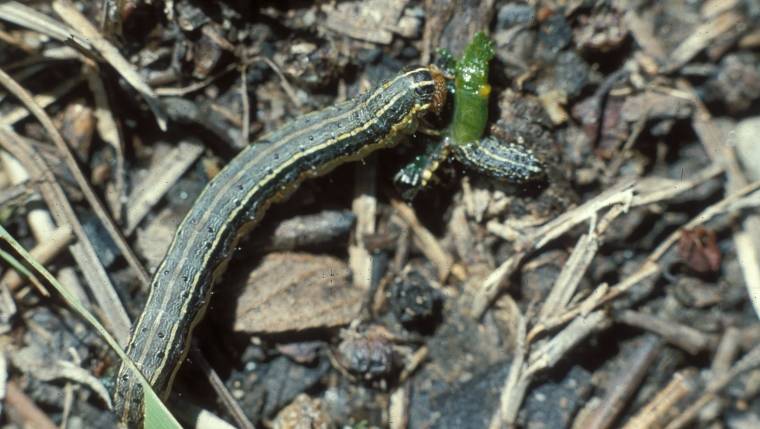 Fall army worms one of the latest biosecurity breaches.

In a scathing letter, NSW Ag Minister Adam Marshall has accused the Federal Government of putting the livelihoods of NSW farmers at risk and threatening billions in farm production by slack biosecurity at the ports.

Mr Marshall said in a letter to his Federal counterpart David Littleproud that a number of recent biosecurity breaches - the entrance of Fall Armyworm, Brown Marmorated Stink Bug, Kahpra beetle and Serpentine Leaf Miner - showed the Federal Government was failing to control the borders.

He calls for immediate action to plug the biosecurity holes at major Australian ports, claiming many containers with biomatter are entering Australia almost without proper checking.

He says there seems to be a "genuine absence of responsibility for biosecurity" at the ports and an "ambivalence" in government to do anything about it. The system lacked traceability and the Commonwealth had backed down on a biosecurity levy.

In a letter seen by The Land, Mr Marshall writes:

"These incursions have resulted in serious threats to NSW agriculture, and will possibly have permanent ramifications and cost the State's farmers billions of dollars. This is unacceptable."

"It is becoming obvious... that these breaches are occurring through the ports and the large amount of biosecurity matter that goes undetected in shipping containers."

"Poor or no traceability systems at the federal border and the tick-and-flick model on presumed 'low-risk' pathways... is hampering swift and effective responses."

"There appears to be an absence of genuine responsibility for biosecurity at the Federal level."

"This is shown by the poor investment in traceability and the abandonment of the onshore biosecurity levy by the Commonwealth Government, a move that has deeply disappointed agricultural stakeholders at a State and Federal level, and is contrary to the recommendation of the 2017 Independent review of the capacity of Australia's biosecurity system."

Fall armyworm moths and larvae were detected in October in traps east of Narrabri and west of Moree. Growers have been urged to be on guard and report sightings to the DPI.

Mr Marshall said the NSW Government has just committed a record $60 million in funding for biosecurity over the next two years in the NSW Budget, including $36 million for this year.

"Now is not the time to be playing chicken with the agricultural sector's recovery from bushfires, drought and COVID. But that's exactly what the Feds are doing by allowing biosecurity breaches at the Commonwealth border," he said.

"The Feds have not come to the table, risking the livelihood of farmers and ultimately costing our state's producers billions of dollars."