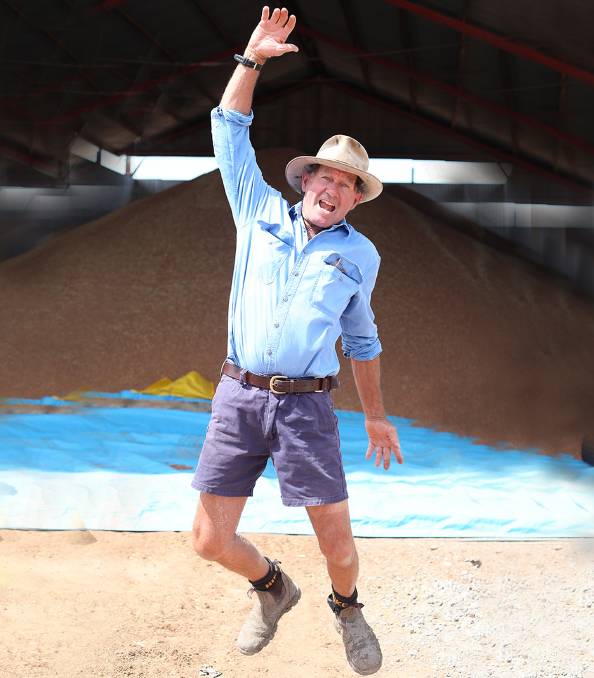 Guy Murphy, Mookoo, Garah jumping for joy with a full shed of chickpeas behind him, with 2020 bringing the Murphys their first decent harvest in years. Photo: Georgina Poole

This harvest has had farmers jumping for joy - quite literally. Especially those in the north of the state, who have had their first decent crops in three years.

Guy Murphy, Mookoo, Garah (pictured above) said their harvest went even better than expected, with good yields, good quality and good weather, despite the foreboding predictions.

"We were a nervous beforehand because the weather forecasters were talking about a La Nina", he said.

"Where we farm we can get flooded out if we have too good a year, the Gwydir comes down and we're in a flood-prone area".

Mr Murphy, who turned 70 just before harvest kicked off, was helped by his sons Nicholas and Douglas and contractors from Inverell, to strip their chickpea, barley and wheat crops.

Mr Murphy said he was particularly happy with their wheat, which made up 70 per cent of their cropping country and went three to five tonnes to the hectare.

"The wheat was exceptionally good, it was very good quality, everything was high protein and there was no downgrade anywhere which is quite surprising", he said.

Selling straight off the header

The Murphys will hold onto most of their chickpeas until the market improves but like many in the area, they sold the majority of their cereals off the header.

"After the last three years people were cashing in and running into GrainCorp as quickly as they could. The prices stayed strong too".

He said although it was a very successful year for the whole area, it would take a while for people to catch up following the drought.

"It's not going to fix everything, we need to get a decent result next year, that would help the district very much".

Last year the Murphys only harvested 100ha, able to get off around 80 tonnes which they kept for seed.

"You don't harvest everything you plant and what you do harvest isn't very good," he said of the previous few seasons.

But now the country is beginning to dry off again with very few millimetres recorded for the whole of November.

"We have got some sorghum in so we may need to get some rain soon, but it's going to battle a bit with the heat".

Although harvest in northern NSW has finished up, southern NSW croppers are still in the midst of it, with many starting off on wheat.