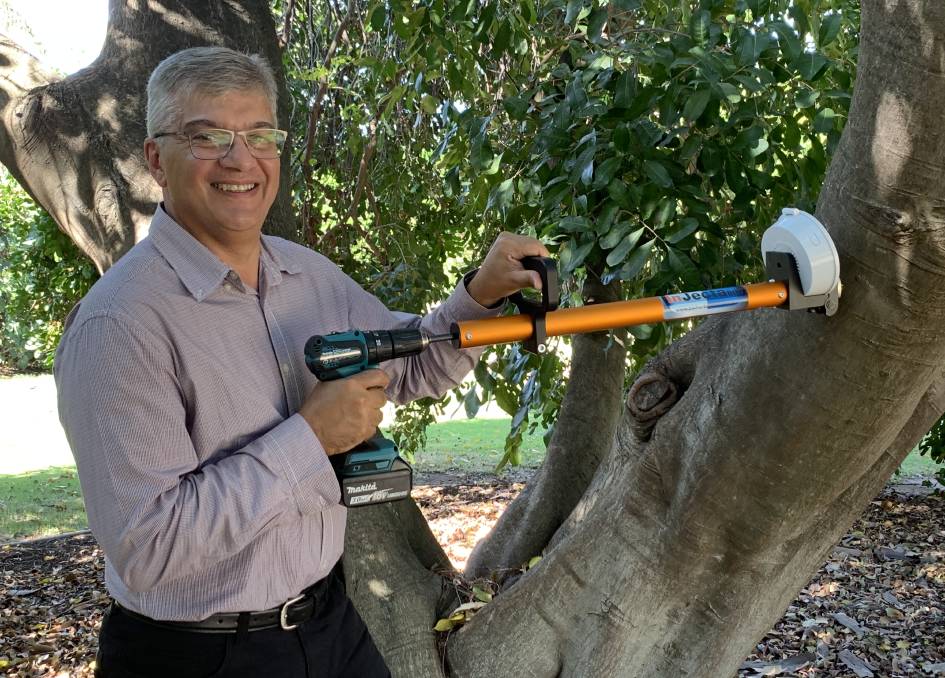 Professor Vic Galea demonstrates how a tree gun might work (not on a pest species). This is the latest version of the InJecta gun developed by the University of Queensland.

It beats an axe and a bit of the old diesel. A new Australian herbicide gun innovation is making getting rid of weed species trees a whole lot easier - no matter how big they are.

Very successful trials have been conducted on farming land near Laidley in the Lockyer Valley at a creek site near a farm that has a "forest" of celtis trees (Chinese elm). The trial found that the injection capsules of herbicide have killed celtis trees as large as 3.5m in circumference. The InJecta herbicide gun was invented by a team at the University of Queensland, and UQ's Professor Victor Galea is extremely excited by the trial results.

The team has been able to measure the right dose of herbicide to kill invasive trees. This saves on traditional methods of mixing herbicides for use and allows for good ecological practices by being able to kill declared invasive weed trees by waterways without the possibility of polluting water and water animals.

The gun drills a hole and then inserts a herbicide capsule into the trunk. Depending on the size of the tree the capsules are inserted at spaces of between 10-15cm. Each hole can be done within four seconds, cutting traditional tree poisoning times.

Professor Galea said he was excited the trials had shown it was possble to kill celtis trees as large as 3.5m in trunk circumference. It may take 12 months for a large tree to die completely. The trial had shown the native trees resuming a normal canopy by the creek near Laidley after the celtis trees died.

Glyphosate is part of the herbicide mix contained in the capsules. The innovation is set to be adopted by a number of Queensland councils but has great application for farmers controlling larger invasive tree infestations such as celtis, a problem invasive tree in many areas of south-east Australia, including on the NSW North Coast.

The InJecta unit is available for sale through BioHerbicides Australia www.bioherbicides.com.au.

"If you check out their website you will see that there is a special on at the moment for the InJecta and two jars of Glyphosate capsules (2,000 doses). Glyphosate can be used to kill any weed tree!," Prof Galea said.

Central to the innovation are the capsules based on the fungal bioherbicide Di Bak Parkinsonia, created by plant pathologist Professor Galea and Dr Naomi Diplock. UQ PHD candidate Ciara O'Brien has also been heavily involved in the trials of the InJecta on celtis trees.

"You could cut them down with a chainsaw and then paint or spray the stump with herbicide," Ms O'Brien said. 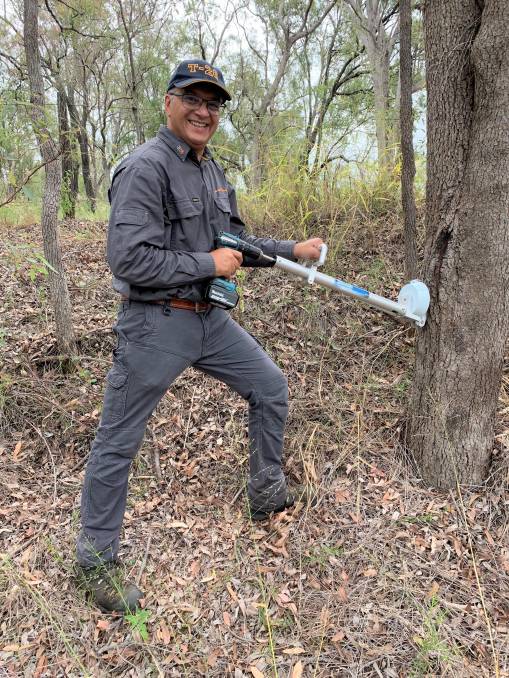 Professor Galea with an older version of the gun.

"The issue is that these methods are problematic, as the celtis trees grow among the native vegetation we're hoping to protect.

"Celtis trees are often near a creek bank or river, so poorly managed application of herbicides can lead to contamination of soil and water and harm adjacent native trees and vegetation downstream.

"Also, the labour involved is significant, and you often need to carry heavy equipment to do the job -particularly backpack sprayers, which require water and possibly chainsaws."

That's where the InJecta gun has proved a huge fillip in the fight against invasive weed species. The new gun has just arrived at UQ (shown above) - just in time for Christmas!

The NSW DPI warns about celtis: "Chinese celtis is a large, invasive tree that has become an environmental weed and a potential weed of agriculture because of its ability to become structurally dominant. It rapidly colonises disturbed bushland, forms dense thickets, replaces native shrubs and trees and dominates riparian vegetation.Chinese celtis has been recognised and listed as a serious environmental weed by bush regeneration groups, councils and the National Parks and Wildlife Service. The demonstrated ability of Chinese celtis in south-east Queensland to spread rapidly makes its control in north-eastern NSW a high priority."

Professor Galea says he hopes in the future to replace the glyphosate in the capsule with a bio fungicide product, but at the moment glyphosate is an important part of the armoury people have to fight weed species. Glysophate also targets all species, while a new unique bio agent would have to be created for each species of tree or weed.

Professor Galea said the InJecta gun was a great tool and allowed people to use just the right amount of herbicide to kill the target trees. "We are only putting into the tree the amount that is required," he said.

He was over the moon at the success of the Laidley trials. "Some people have called it the Terminator gun. I think it looks more like a Ghostbusters gun."