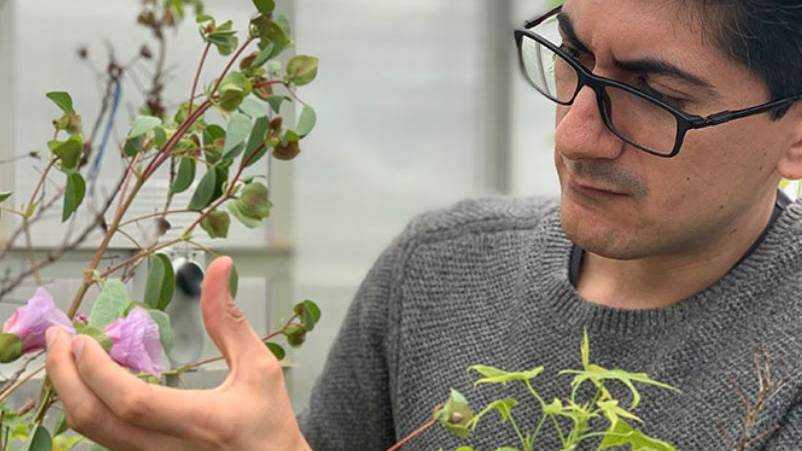 A BREAKTHROUGH from Macquarie University researchers has revealed new insights into why cotton pollen fails after heatwaves, paving the way towards new genetically engineered crops that can withstand extreme temperature.

Given the extreme heat now experienced over summer in Australia's cotton belt, such as the 2017 heatwave which saw over 50 consecutive days above 35 in Moree, having varieties more tolerant of heat will become increasingly important.

RELATED: Moree above 35 for 50 days straight

The Macquarie Uni research found damage to pollen from heat was one of the major factors that could lead to total crop failure.

Experiments showed that cotton pollen grains exposed during their formation to temperatures above 36 degrees lost their capacity to fertilise and produce lint.

"The heat damage to plants is very specific to pollen grains (the male cell line) and cotton is no exception, with the lint-filled bolls failing to form after a one- or two-day heatwave at the vital stage in pollen formation," said plant physiologist Brian Atwell.

"If we were to get an extended run of 40-degree days about a fortnight before anthesis (flowering), the moment the pollen fertilises the ovary, then we could have a major wipe-out," Prof Atwell said.

This research was critical as previous work on pollen sterility focused mainly on frost.

Wild cotton relatives native to Australia were found to be a rich source of genetic material tolerant of the hot temperatures found in the north of the country.

"We chose cotton because in the theme of everything we do is focused on agricultural plants and their closely related wild Australian 'relatives'," explained Prof Atwell, whose previous discovery of a heat-resistant protein in wild rice is now in the development phase in genetically engineered wheat.

Fewer than 10 per cent of these proteins were strongly associated with heat stress, giving researchers a deeper insight into precisely how and when heat damages the pollen.

From these protein identities, genes can be identified.

"Our data on the proteins that were found in cotton pollen will provide new molecular tools for the crops of the 21st century," Prof Atwell said.

The work will not just be relevant to Australia.

Pakistan, India, Egypt and the US are all major cotton producers and exporters and often experience similar heat events during the cotton growing season.

The work could also help create water use efficiencies and boost the dryland cotton sector.

"There is very much a focus on securing yields under dryland conditions," Prof Atwell said.

"The damaging effects caused by heatwaves are exacerbated when water is withheld and evaporative cooling slows down. In non-irrigated crops, the effects of heat will become much more acute."