It's no wonder that Barongarook Pork is amazing - their pigs have access to all the good things in life, especially mud. 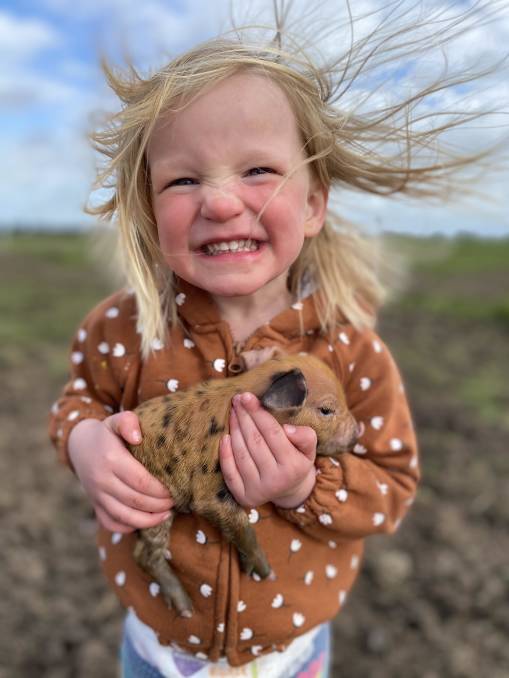 TWO PEAS IN A POD: Georgie Meade, 2, spends some happy times with a piglet on her family's Barongarook Pork farm. The Meade family grows free-range Berkshire and Duroc pigs.

The sun has already set when Xavier Meade swings through the gate to the family property. After a long day as a carpenter, he is on his way to see some very special ladies. All 45 of them.

In the darkness, the huge beautiful black pigs greet him, and wander through the moonlit paddock to have their dinner.

Caring for Berkshire pigs is a big job for Xavier and his wife Laura, but the owners of Barongarook Pork wouldn't have it any other way.

Their journey with pigs started almost by accident. It was in 2015 when Xavier and Laura bought a 6.5-hectare block of land near Barongarook, Victoria, for one reason. 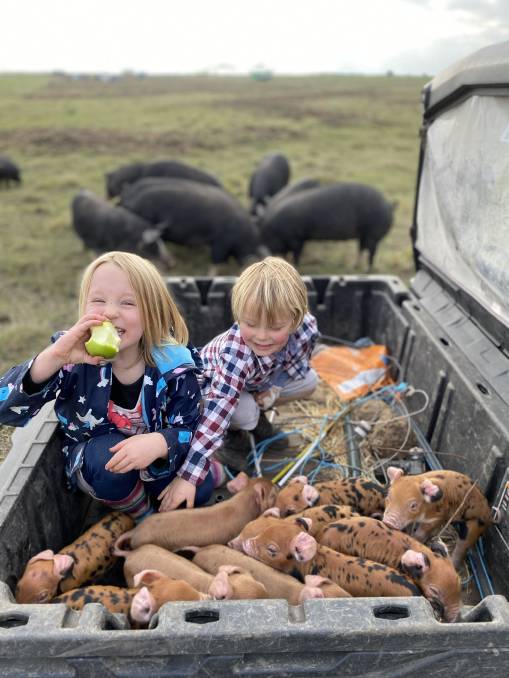 TIME TO MOVE: Baby Berkshire-Duroc piglets being moved, with their mums, to a better spot in the paddock, with a little help from Molly, 5, and Jack, 3.

"We just wanted to grow our own food, " Xavier said.

They had some sheep and cattle, a few chooks and ducks - and two Saddleback pigs. And it was only once they processed them and their families got a taste that they got the idea to grow more.

Next they took 12 pigs to a Christmas Farmers' Market, and got swamped by people wanting to buy their pork. "From there, we just thought 'let's do this'," Xavier said.

Xavier said they tried a number of different breeds, but in the end they settled on Berkshire sows, using both Berkshire and Duroc boars.

"We found that the Berkshire are really tasty, but they can get a bit of fat on them if not fed correctly. While the cross with Duroc gave a really good balance of meat and fat, and it is still really juicy."

And so the pigs took over the farm, and they started to build their numbers. 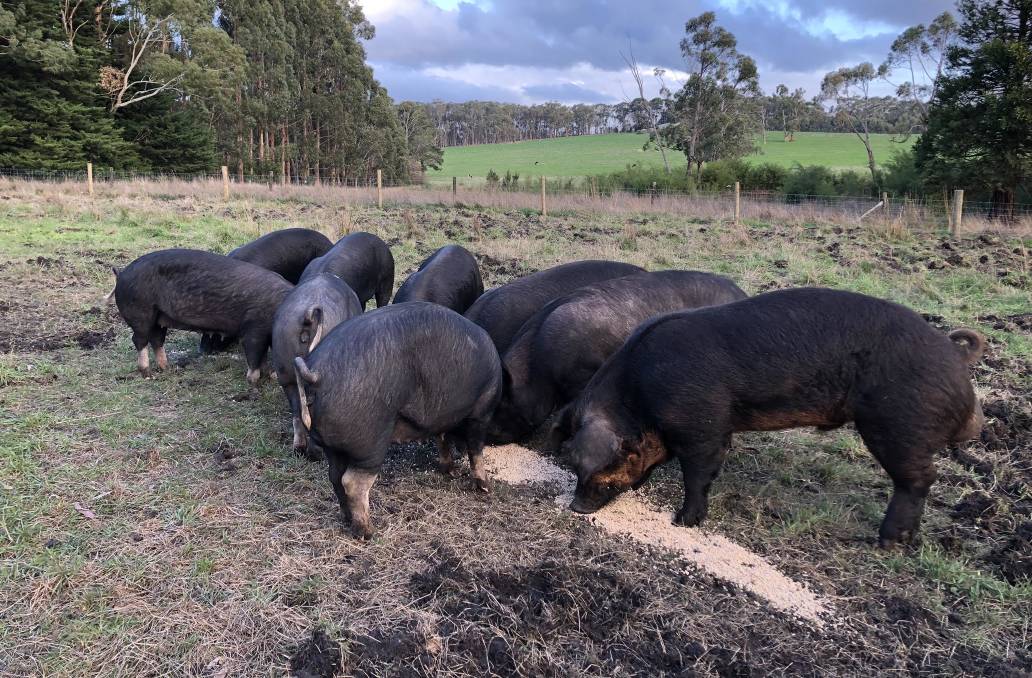 But they soon outgrew their small block, and they moved their pigs onto 70ha on Xavier's father's property, the home of Pelican Rise Limousin stud.

And it is no wonder Barongarook Pork is so popular. The pigs spend their days being pigs, grazing in paddocks, digging 'like bulldozers' and snoozing. As well as having cool, fresh water, they even have a specially made wallow - a hole which is automatically sprayed with water twice a day to give the pigs a spot to wallow in the mud. The wallowing also helps control parasites.

Xavier and Laura, as well as their three children Molly, 5, Jack, 3 and Georgie, 2, love caring for the pigs and enjoying their personalities.

"I love that we can take the kids with us, and all they want to do is hold a baby pig," Xavier said.

"Pigs are just such a different animal. They are a cool animal. We can go and pat the sows. They are a really unique creature. We can sit at our bay window and see pigs roaming around, and be enjoying our own pork. It is a good feeling." 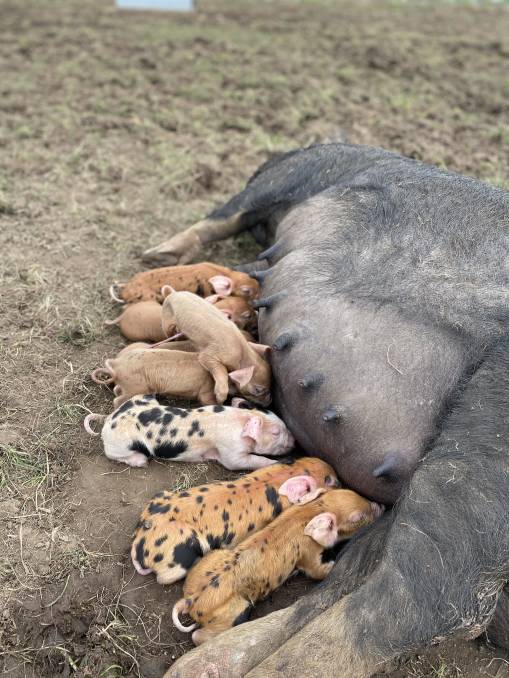 LUNCHTIME: Baby Berkshire-Duroc cross piglets having a feed at Barongarook Pork. Sows have huts to farrow in, but sometimes just farrow in the paddock.

It's always time to pig out, doze, dig, repeat

Just be a pig.

That's how Xavier and Laura Meade care for their pigs at Barongarook Pork, and their Berkshire and Duroc pigs are lapping it up.

Their Berkshire sows live in three family groups, and each group runs with a boar for two months.

The pigs spend their days on pasture, digging and wallowing, as well as being fed a vegetarian pellet mix.

The sows are handfed every night, while the grower pigs have access to pellets at all times.

The pigs are moved from smaller paddocks, or cells, regularly for fresh pasture.

They also have access to clean, fresh water in Polymaster troughs, which have a little lip for the pigs to drink from. 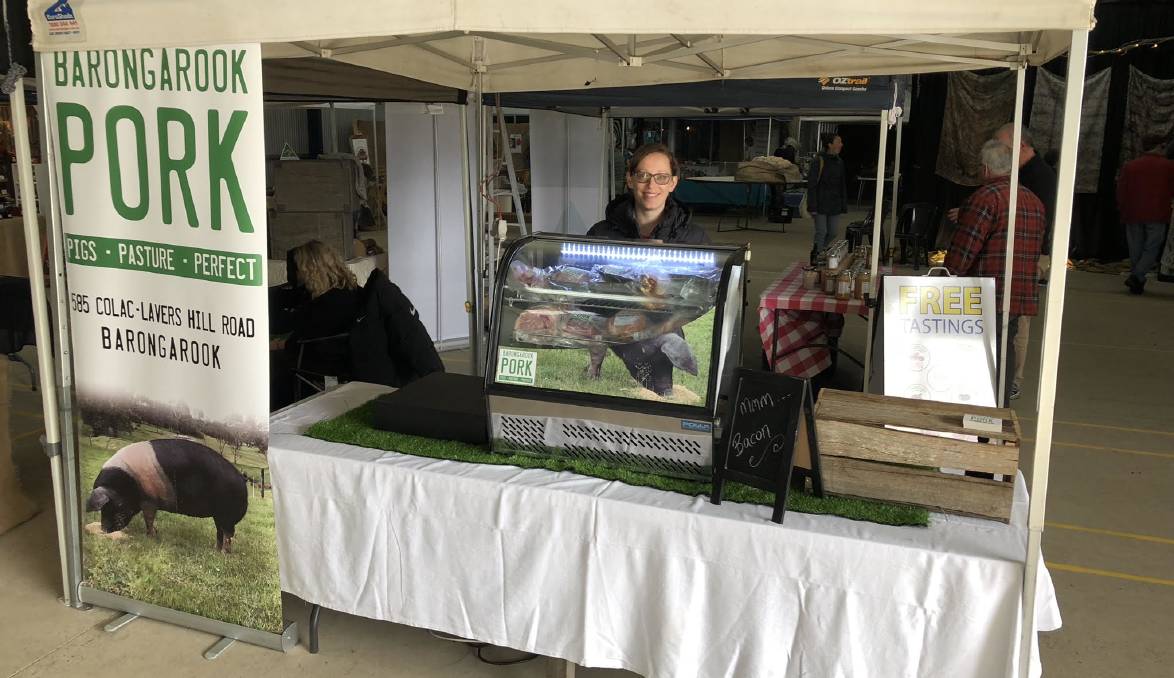 HAVE A TASTE: Barongarook Pork is available online and in a number of cafes and restaurants.

The Meades have specially-made shelters with fresh straw for the sows to farrow in, but it doesn't always go to plan.

"Often they will pick a hut and then make a nest with things they have picked up in the paddock, but sometimes on a warm day, they will just go and farrow wherever they feel like it," Xavier said.

Piglets are weaned at around eight weeks old, and at around six months old, sows are selected for breeding, while the rest of the growers are processed, when they reach around 60 kilograms dressed.

Xavier said they are processed at Diamond Valley Pork, and cut up, packaged and labelled by local butcher Country Fresh Meats.

Their bacon and ham is smoked at Gamekeepers in Melbourne.

The Meades have a refrigerated courier service, where they deliver their pork, as well as other local produce, to restaurants and customers. 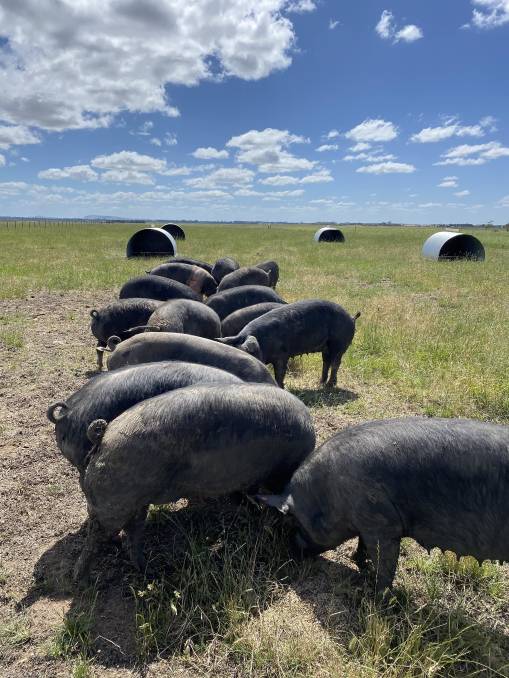 LET'S EAT: Berkshire sows having a munch in their farrowing paddock.

When Xavier Meade was in year 10, he and a mate reared two pigs and had them processed for a school project.

He never would have guessed in the future he would be supplying free-range pork to some of Victoria's best restaurants and cafes.

But once COVID-19 hit and many restaurants were forced to close their doors, Xavier and Laura began to expand their online business to make sure customers could still access their popular pork. Barongarook Pork now delivers pork packs, hams and half and full pigs to direct to customers' doors.