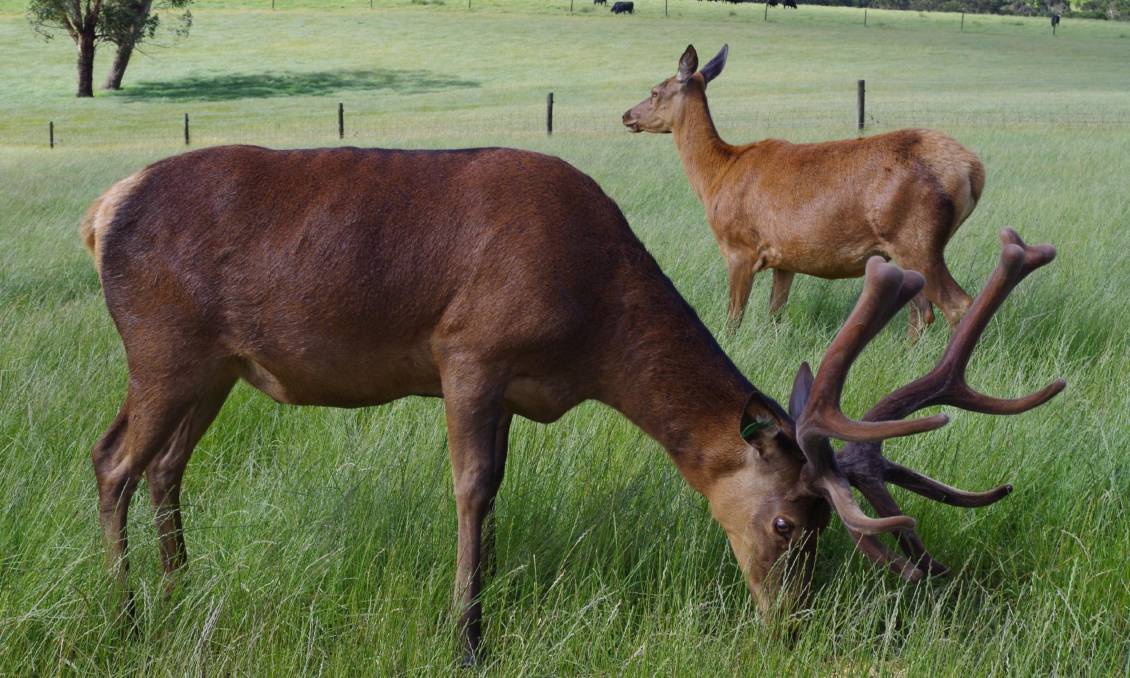 GOT ANTLERS?: A Red Deer stag and hind at Terramirra Park Deer Farm. The farm breeds eight kinds of deer, including the Canadian Elk.

Mike Vella has spent over four decades breeding deer, and he still finds out something new every week.

For Mike Vella, it is normal to hear a Canadian Elk bull bugling on a moonlit autumn night, or see a huge Red Deer grazing past his house.

Few people can say they breed every kind of deer available in Australia, but the owner of Terramirra Park Deer Farm can.

And after breeding them for more than 40 years, Mike learns something new about them every week.

But breeding deer wasn't something Mike expected to be doing for more than four decades. 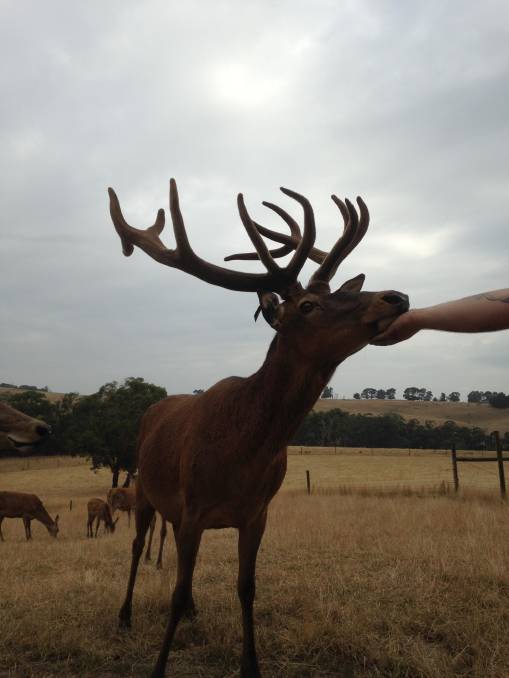 HELLO THERE: A Red Deer stag.

Both he and Jill were raised in Melbourne, but he said he always felt drawn to farming.

After working on a mate's farm, in 1979 he decided to apply for a job as a manager of a new livestock enterprise.

It turned out to be a deer farm, and he got the job.

"I'd never seen a deer up close before,' he said.

"And this turned out to be the first commercial deer farm in Australia."

He managed the deer farm for more than seven years, until the property was sold.

"And we thought 'well, we know what we are doing with these things'," he said.

After that they could only afford four 100-metre rolls of wire to keep them in. 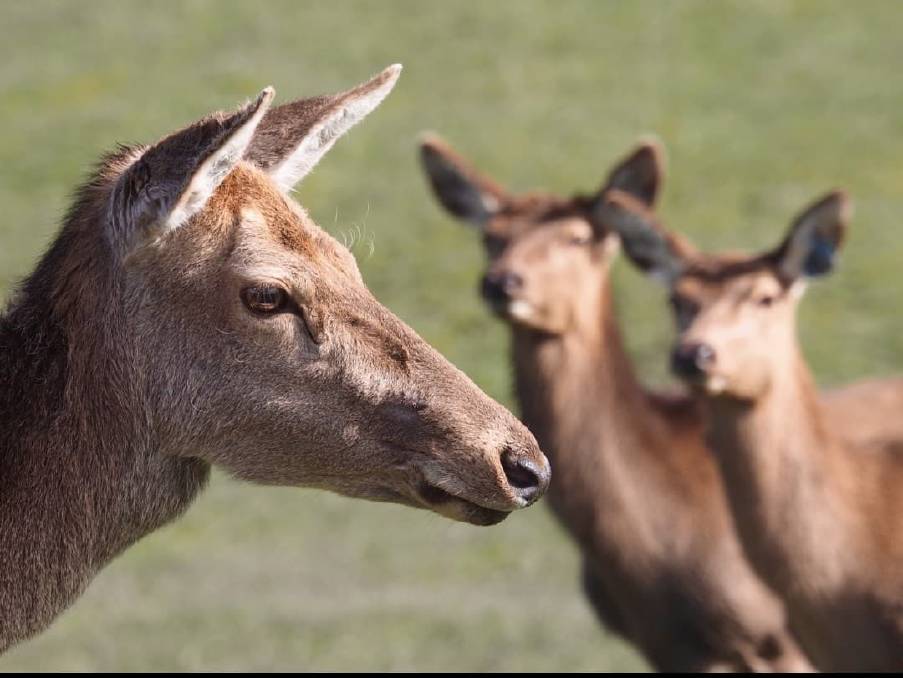 They started building up their numbers by trapping the wild deer and selectively breeding them at their home property.

"We trapped the Red Deer in Queensland, while we trapped the Fallow Deer in Tasmania and around Canberra," he said.

Then they bought another 20ha next door, and today run between 250 and 350 deer, depending on the time of year.

The herds of deer graze the property in their breeds, separated by two-metre fences.

Those that can breed with one another are kept a paddock apart.

The Vellas also cut their own silage and clover and rye hay to feed the deer. The bucks and stags also get mineral blocks.

Mike enjoys learning more and more about his deer.

"One of the funniest things is watching a mob of little fawns running around in the evening," he said.

"They are like little lambs except much faster. They bark and squeak and squeal.

"I love in the evenings sitting down the paddock and watching them.

"On a moonlit night you can hear an Elk bull bugle through the valley."

Mike said their antlers grow from nothing to complete in 100 days.

"They completely regenerate hair, bone, blood vessels. They are the fastest growing thing on mammals known to man," he said. 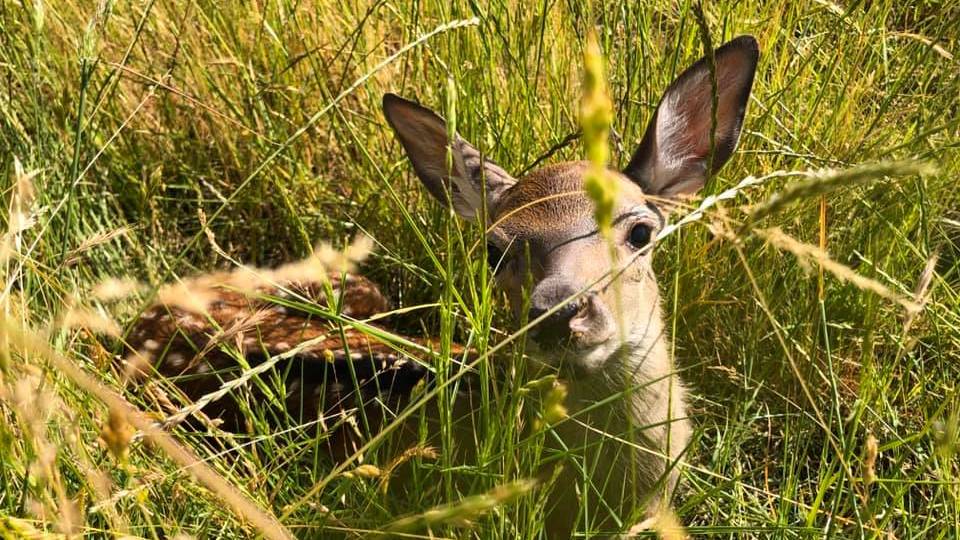 I CAN SEE YOU: A Sika Deer fawn. Sika are one of eight breeds of deer on Terramirra Park Deer Farm. Different breeds go into a rut at different times of the year.

In a rut: feel the need to breed

It goes without saying that Mike Vella is intrigued by deer. And learning to work with them has been a skill he has refined over the decades.

If they need to treat a deer, they have a hydraulic crush where they can handle the deer to check teeth, drench, or very rarely to pull a calf.

Mike is very passionate about their breeding. "All the females are tagged, and I know who their fathers were, who their mothers were, their grandfathers," he said.

Mike said they sometimes cross the breeds to get hybrid vigour. Deer are processed when they reach between 18 months and two years old, when their average dressed weight is around 60 kilograms. Mike takes the long drive to Camperdown every couple of months to have them processed. Not only does Mike Vella enjoy breeding a range of deer, he is passionate about producing venison for Melbourne restaurants.

Terramirra Park Deer Farm delivers venison to a number of Melbourne butchers and restaurants, but they haven't stopped there.

They also have an on-farm shop, where visitors can buy deer products, as well as meet some friendly deer.

"We love that we can use absolutely everything from the deer," Mike said.

They sell everything from antlers to ears, and even deer pizzles and testicles, which are an important part of Chinese medicine.

Mike believes the Red Deer have the best by-products, especially antlers, and they also have a consistent size of cut.

"But the Hog Deer is my favourite to eat," he said.

And finding good quality deer products and venison can be tough. Mike said in the 1990s, there were 660 deer farms in Victoria alone. "But today isn't even 40 Australia-wide," he said.