DEMOLISHED: Gunnedah mayor Jamie Chaffey in front of some of the demolished area of the Gunnedah Saleyards. Photo: Peter Hardin

The upgrade of the Gunnedah Saleyards is moving along well, with demolition of the old sheep yards continuing.

Gunnedah Shire Council has said 'adios' to the old sheep yards in the Gunnedah Saleyards, as the overall upgrade continues.

The $17.5 million upgrades were funded by the state government in September this year, and work is chugging along well.

According to a council spokesperson, the sheep yards demolition should be completed by the end of January.

This is being completed by local contractor BP Crane Contracting, which mayor Jamie Chaffey says is "great".

"Council's focus is on local procurement where possible, and there's a procurement policy that supports that within council," he said.

"As the further development of opportunities come, and tenders go out, we will be strongly advising that local businesses within the Gunnedah shire that have the ability to offer the goods and service to put forward that to work."

Expressions of interest and tenders for numerous projects related to the upgrades are set to go out over the next few months, with construction works to follow.

The council is currently seeking expressions of interest for the redesign of the truck wash facility. More details about this can be found on the council website.

"The twin drive through truck wash as well as the single ones we've got at the moment will be a stand out, not only for Gunnedah but also the wider region in terms of cattle movement," Cr Chaffey said.

He said solar panels being installed in the saleyards would "generate some power which will cover the expenses of the operation of this facility".

More details about the size, structure and placement of the solar panels will be finalised early next year. DESTROYED: Some of the material from the demolition. Photo: Peter Hardin

The spokesperson said the benefits of the project overall were "immense", as it would generate "significant economic stimulus to the Gunnedah shire both during the construction phase and ongoing, positioning Gunnedah as a national leader in the industry".

"The project has been designed with extensive industry and community consultation and will ensure the yards are modernised and efficient, providing additional animal and user comfort," the spokesperson said.

"The upgrade will also improve the aesthetics of this entrance gateway to Gunnedah." 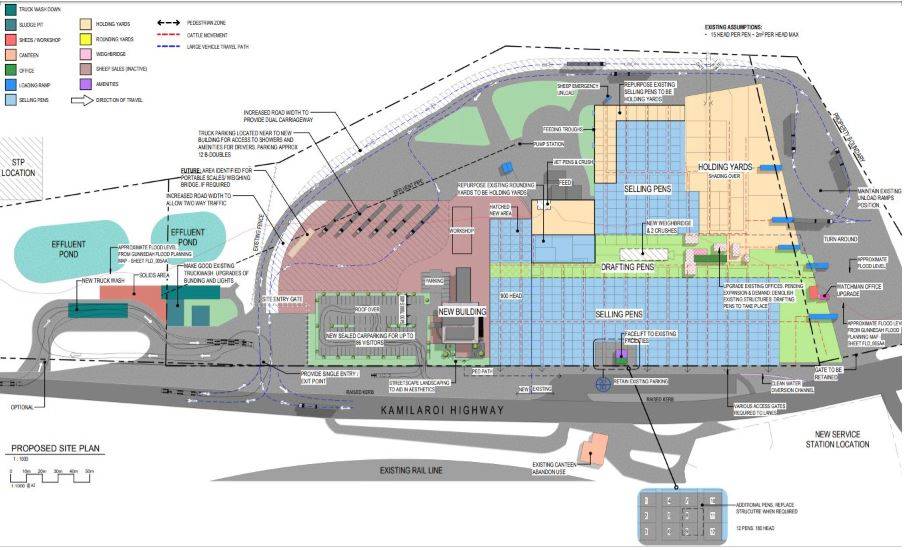 NEW LOOK: The layout of the new design. Image: supplied

As well as the sheep yards removal, the project will also feature a yard expansion, technology upgrades, and relocation of the car park and canteen as part of a multi-use building on the same side as the saleyards.

It is anticipated the entire project will be completed in 2022. The final master plan should be ready for release in January.