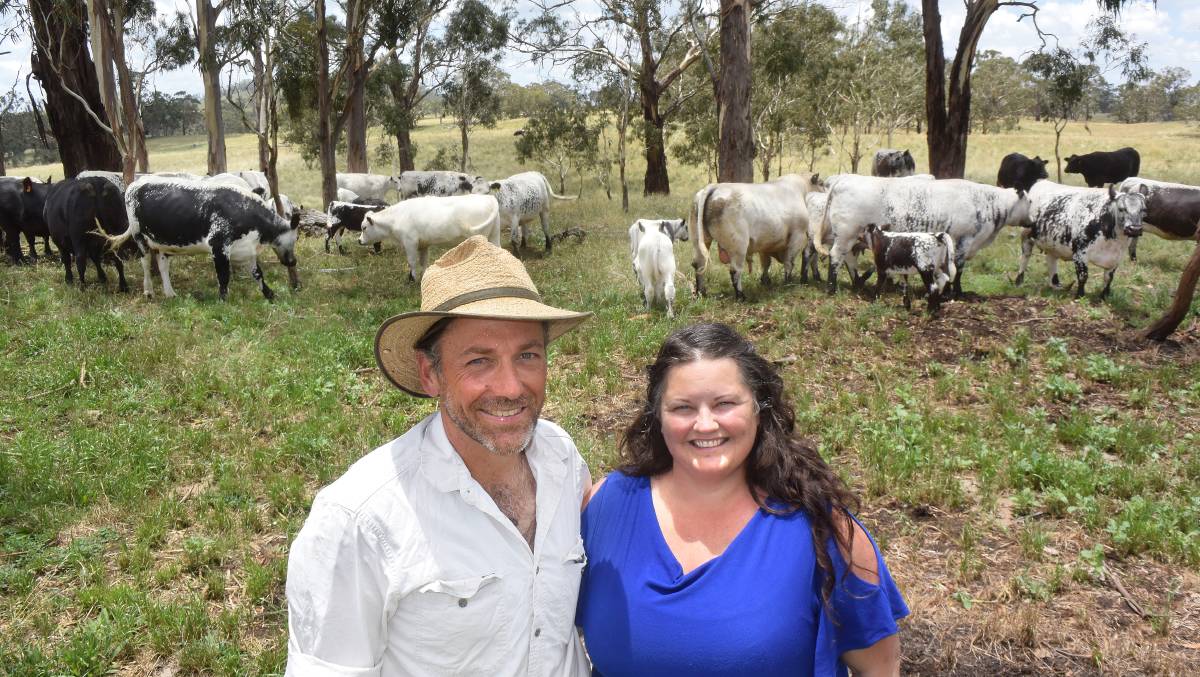 Composite breeding with Speckle Park as the base of their program has led to success on hoof and hook for John and Bev Winter, Furracabad via Glen Innes, who have found a recessive myostatin gene can work in their favour.

Speckle Park cross steers bred by Bev and John Winter, Furracabad via Glen Innes are challenging breed society assumptions when it comes to what is a prize winning animal on hoof and hook.

Bigger beef with all the right carcase attributes is a good thing and the Winter family have found that a recessive myostatin gene, nt821, prevalent in Speckle Park offspring, can work in a breeder's favour provided the trait is managed.

The breed society does not allow Speckle Park offspring expressing two copies of the myostatin gene to be registered but for the commercial cattle producer there are other things to consider.

If a bull carries one copy of the gene, as does one of their stand-out stud sires Minnamurra Junction, then his ability to pass on just one copy can have positive impacts on progeny, with increased eye muscle area and retail beef yield.

In the case of the Speckle Park, traits for flat rib bone and intra muscular fat are retained and when bred with an eye to manage myostatin, the outcome can turn judges' heads in the ring and, afterwards, in cold storage.

Results this year in led steer competitions have proven the point.

Only last month a rule breaking steer with genetic attributes that should have lowered his scores took out the double header - on the hoof and on the hook - at a Northern Schools Competition in Glen Innes.

Agricultural students at Glen Innes High School, led by teacher Jody Lamph grew out the second cross Speckle Park/Speckle cross Angus steer bred by the Winter family, from one of their own bred Speckle/Angus cows sired by the Speckle Park Winter Notorious, a son of Minnamurra Junction.

What the breeders did not know at the time was that the recessive gene on the bull's side would team up with another that came through the cow's sire. The result was a calf that as it grew began to show signs of having two copies of the myostatin gene, or what some call double muscling. Minnamurra Junction, is a recessive carrier for the myostatin gene.

"We were lucky. We now know more about the influence of myostatin gene in F2 cattle but we can see that managed carefully it is a benefit."

What made the win for this steer more remarkable was how he came out of a drought, arriving at the school as rains began to fall. Winter cattle respond to a gentle touch and so this one certainly felt the love from students.

Initially he presented like a box of beef, somewhat square but with excellent hindquarter muscling. The kids called it Oink.

Mrs Lamph suggested the students feed a special Riverina blend ration that included oils to fatten the lean body to specification. In fact he turned them down and ate with the others.

Mrs Lamph said it was a credit to the students how they achieved good and even fat cover, first winning the middleweight class at 482kg before going on to claim grand champion.

As a winning carcase the 16-month-old calf recorded 90 out of 100 MSA points with 64 per cent yield and a significant 113 square centimetre eye muscle area.

In September a Winter steer the students called Blizzard for his white coat, made it to the second round on hoof of a very competitive class during the annual Colin Say and Co Steer led steer extravaganza. He then went on to win grand champion carcase. All these wins are from steers that carry the myostatin gene on one side but only the double winner Oink expressed the double muscling traits because the gene also came through on his mother's side.

"I love working with the school," Mrs Winter said.

"You get so much information back and we pump that back into our program. Speckle Park EBVs have only been in Australia for 12 years so this feedback is really important.

"The take home message from us is that myostatin as a recessive trait should not be feared.

"Don't be afraid. You just need to know your own herd and these days genetic testing is quite easy."

Breeding offspring with parents that both carry the gene is not recommended, because excessive double muscling - think of a Belgian Blue - can lead to calving difficulties and too much pressure on internal organs by enthusiastic muscling.

However, if just one parent carries the gene the result can be increased muscling along with eye muscle area. Testing for the gene ranges from $16 to $36 and requires a hair sample.

"Estimated breeding values only tell you so much," Mrs Winter said. "You can't just rely on the raw data."

Aside from carcase traits, as breeders Bev and John like the fact that Speckle Park are so good at converting feed to beef. Their fertility is phenomenal and when quietly handled and in the Winter's presence, they have a calm temperament. Low birthweight is helpful while the 200-day growth figure makes the job worthwhile.

The Winters first invested in Speckle Park in 2010 with an embryo.

"We liked their numbers and figures," Mr Winter said. "We were looking for something not too different to Angus and we were after hybrid vigour."