Contrary to popular belief, converting raw farm commodities into value-added foods, textiles or other manufactured export products does not create much, if any, extra value for Australia's economy.

In fact, our economy is actually thriving with agriculture's predominantly "raw deals" on the export front, according to analysis by the Australian Bureau of Agricultural Resource Economics and Sciences.

Global markets and supply chains have changed so much in recent decades that the popular mantra about needing to process farm commodities at home to make them more valuable on global markets is not necessarily relevant to a large portion of Australia's ag export sector.

Freed up trade relationships in the past 20-plus years have made off-shore processing more cost effective and likely to deliver more reliable supplies of finished goods to a larger pool of nearby customers.

"For Australia, trade in raw commodities and minimally processed products (such as meat) have provided the largest and most important value-creation opportunities for Australian agriculture," said ABARES head of forecasting and trade Dr Jared Greenville.

"This is a feature likely to continue in coming decades."

As global trade environments had improved, the agricultural and food trade had grown increasingly specialised with many multiple parties supplying processors.

"The final product on supermarket shelves or consumed in restaurants and cafes is often produced in different stages across multiple industries in different countries," ABARES reported in an industry insights document co-authored by Dr Greenville and economist colleagues Andrew Duver and Mikayla Bruce.

Farmers were benefitting from increased competition between global scale processors who often enjoyed marketing advantages from their proximity to large consumer bases. 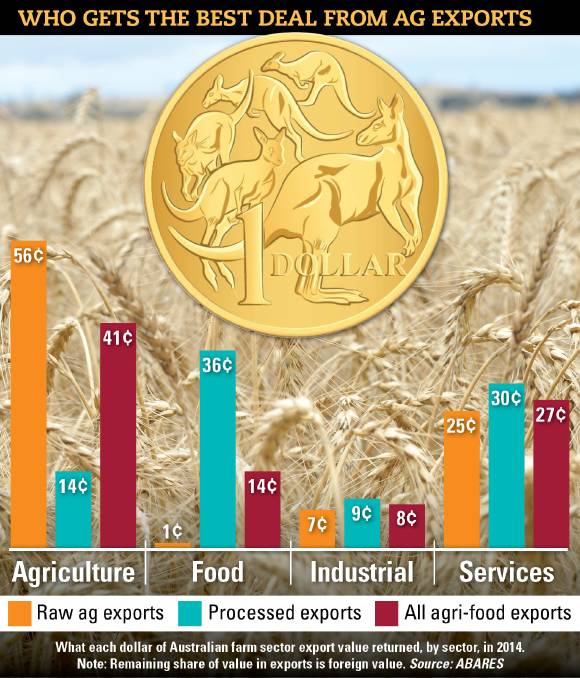 ABARES estimated about 56 cents in each dollar earnt from our exported raw farm commodities flowed back to the agriculture sector.

About 25c was accrued by the service providers such as trade and financial services and transport, and seven cents was shared by domestic industrial input providers of fuel, chemical, fertiliser and other products.

While local commodity value-adding was still vital to many Australian domestic markets and certain export customers, ABARES noted even those manufacturers invariably needed to complement their locally sourced commodities with imported inputs so they had consistent supplies, and to stay relevant and viable in today's global marketplace.

Global competition between processors was tipped to grow over time, but primary production was less likely to face as much increased competition given its reliance on available land and climate conditions.

The report said Australian value-adding industries already found their global competitiveness tended to drop at each additional processing stage in the value chain.

On the other hand, despite some volatile production years, primary production in Australia was intrinsically tied to our geography and natural endowments.

"These attributes can't be easily traded and therefore they contribute significantly to Australia's competitive advantage."

Rather than focus too much on further processing our crops or meat, the ABARES report suggested our farm sector would do better to invest in transforming "undifferentiated primary products into more specialised lines" to create extra raw export value.

This may include developing and segregating more crop varieties with the consumer in mind.

"These changes may generally increase the cost of production, but they also generate returns for the economy, creating income and jobs, just like domestic processing activities," he said.

"Ultimately Australia must rely on its own competitiveness achieved by its own endowments, production efficiencies and the quality and reliability of its products."

ABARES' report noted, some of those product quality and reliability advantages were also found in downstream processing activities, with the wine and dairy value-adding sectors being prime examples.

The dairy industry and its burgeoning nutritional formula business, in particular, had leveraged both its reputation for food safety, along with access to imported inputs from New Zealand which combined with domestic production to create extra export value.

Some of these reputational attributes for processed products, such as provenance and food safety, would likely continue to appeal to customers in a post-COVID 19 market environment.

The story Ag's export 'raw' deals are a good deal for the economy first appeared on Farm Online.