"... if we don't get too much more rain between now and then we could be looking at an excellent harvest potentially." Hopeful: Vigneron Bruce Tyrrell said the ground was so waterlogged after recent rain he saw one of his tractor's front wheels disappear into the soil. Photo: Max Mason Hubers

HUNTER winemakers are hoping the sunshine that has followed weeks of wet weather is here to stay, so they can start harvesting their grapes.

Tyrrell's Wines vigneron Bruce Tyrrell said it was normal to see wet conditions after four or five years of drought.

"You never say no to rain," Mr Tyrrell said.

"It's probably a little more than we would have liked, but I spent a long time studying the synoptic maps this morning and if we can hang in there until the end of the week then I think we might be okay.

"The new moon comes in next week and if that comes in dry, then normally it stays dry. If that happens we're going to have a bloody good vintage."

Mr Tyrrell said two months ago, before the relatively cool summer started, he would have predicted his winery would be picking grapes by the end of this week.

"But it's another two odd weeks away," he said.

"So we've got a bit of a chance, if this will now fine up, a few more days and we'll be starting to get into the vineyard so we can start to slash and knock the grass down, because if you've got too much grass in your vineyard then the air can't get through and you've got moisture and humidity and that's not good for bunch rot.

"There's maybe a little bit of stuff [downy mildew] here and there, but at the moment if I look at the weather map it tells me we're going to dodge a pretty big bullet." 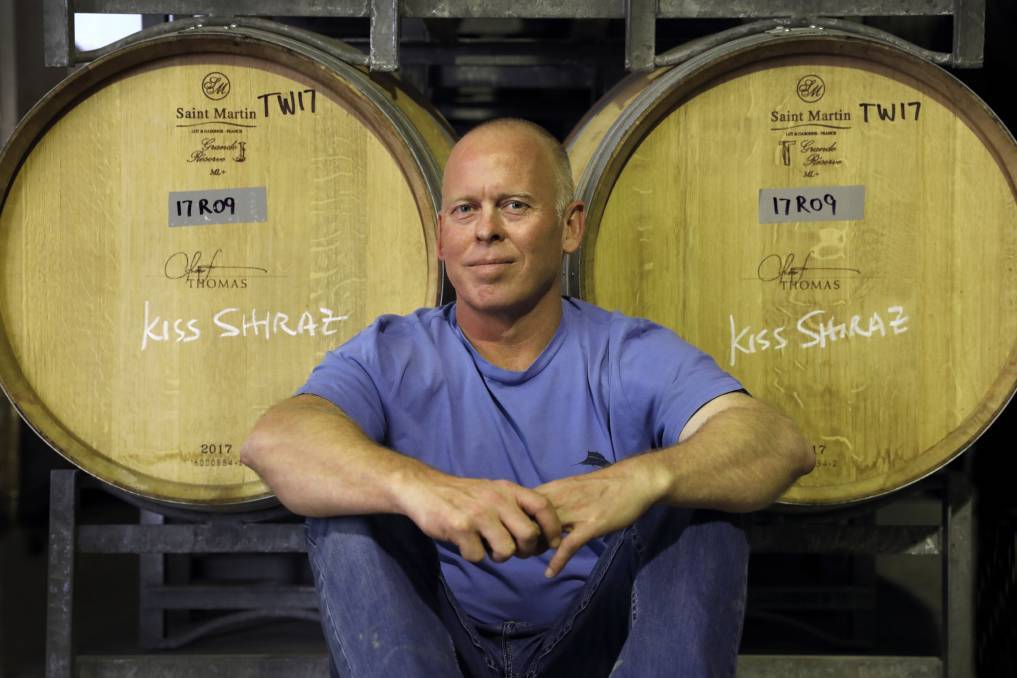 Optimistic: Winemaker Andrew Thomas said he tried not to worry about things beyond his control, "you've just got to deal with what Mother Nature hands to us and react accordingly".

Mr Tyrrell said the ground was already "saturated", so it was the presence of rain, rather than the amount, that made the difference now.

"If you've got little bits of misty rain, that misty rain we had a day or two ago, no wind, humidity, that's what causes the trouble," he said.

"There's downy mildew out there now and we need to get ahead of that, because if downy gets out of control it will actually kill the bunch.

"But probably our biggest fear now is the vines have got so much water available to them, they take up too much water, then there's the fear you'll get some split berries and then you get bunch rot if we haven't got protection on against that."

Mr Tyrrell said after the harvest he would investigate teaming up with some other winemakers and buying a drone to spray the vines.

He said in the 1970s "wet was an understatement" and he had hired a helicopter pilot to spray the vines from about six feet above.

"The coverage we got with the spray, none of the carts, none of the tractor-drawn stuff, on-ground stuff could give us anywhere near as good a coverage as the helicopter, because when it was down low the rotors were creating this amazing swirl and we were getting 100 per cent coverage," he said.

"Without the chopper we wouldn't have picked any grapes in some of those years, so if we've got to face these slightly more severe climates - and I wouldn't be surprised now that we don't go into a decade of a bit cooler and a bit wetter times, as we go through the cycles of the weather - then we're probably going to need to have something like that."

Mr Tyrrell said "the word went out" before Christmas that some wineries may have trouble securing grape pickers - which he said were usually a mix of grey nomads and backpackers - considering the closure of national and interstate borders, but "we now have more on our books than we need".

"A lot of them have come locally, Newcastle, Maitland, Singleton, and it's people who are looking for a job, we all forget we've got eight odd per cent unemployment," he said.

"There are people out there and this is casual work for five or six weeks, but it's better than the dole, it pays better and also I always like to see some young unemployed in the picking team because they learn how to work and they learn you've got to be there at six o'clock in the morning and you've got to keep up and all that sort of stuff and it gives them a kickstart to say 'Oh okay, now I know what I've got to do'. Hopefully it gets some of them permanent.

"We always find - and I know everyone round the district [does the same] if you're looking for a good young person, I'm one short in the vineyard, I'm going to look in that picking team."

Thomas Wines vigneron Andrew Thomas said it was a "little bit too early to say for me" whether the recent wet weather had affected his vineyards.

He said rain could not only potentially lead to mould and mildew, but also delay the ripening process by days or weeks.

"My production is entirely focused on semillon and shiraz," Mr Thomas said.

"So verdelho and chardonnay, they will start picking over the next couple of weeks, but I actually won't start picking until around Australia Day.

"Semillon is a slightly later variety than the others so we're in the lap of the weather gods.

"It really all boils down to what's going to happen between now and when we start harvesting.

"If there is significant rain it's definitely going to make for a challenging season, but if we don't get too much more rain between now and then we could be looking at an excellent harvest potentially. It's a little too early to tell."

Mr Thomas said he understood there were patches of downy mildew around the valley, often related to the soil the vineyards were planted on, but he had managed to avoid this.

"As of today, I am happy with the way the vineyards have responded to the conditions we've had so far," he said.

Mr Thomas said he was in his flagship semillon vineyard on Tuesday, which is on deep, well-drained, sandy-like soil.

"So you get a couple of inches of rain and once it stops you can basically get a tractor through the next day because it's really well drained," he said.

Mr Thomas, who uses contractors for hand-picking, said international backpackers usually make up a significant proportion of picking teams across the valley.

"My vineyard manager who runs the contracting team has put some ads in Gumtree and he's had a decent response to that and he's got his regulars that come back each year, locals," he said.

"But to an extent all the various wine businesses around the valley are going to be competing for the limited number of pickers, so it certainly pays to get in, get yourself organised early.

"I think we're going to be okay. I guess the other issue is it's all well and good to have these pickers signed up and ready to go, but in reality, they come out and do their first day of picking and a lot of them tend to throw the towel in because it's not easy work. It pays reasonably well, but it's hard yakka, it's outside so it can be hot. I'm hoping we've got enough pickers to get across the line, given the fact we probably will lose some along the way."

He said anyone wanting work should consider picking, saying there would be ample work in the valley for around the next six weeks.