Royal show poultry judge Ray Connor had an eye for quality that he finely honed on Old English Game, Australorps and Pekins.

The best Australorp breeder in Australia, Ray Connor of the Lower Clarence, was remembered at his funeral this week.

To become the best at any pursuit one needs to enjoy the passion and to drive it down the pitch. Ray Connor of Cowper, on the Lower Clarence, had all that in spades.

The best breeder of the Australian Australorp, Royal Agricultural Society judge and author, Mr Connor was given a fond farewell at a memorial service in the St James Anglican church at Maclean this week celebrating 97 years of good life including more than seven decades of dedicated marriage to his wife Gertrude, who was a Sunday school teacher when they met.

Born in the house next door Ray lived his whole life on the family farm, enjoying sunsets over the wide brown river better than those of anywhere else and had it not been for his extensive poultry judging career he and Gert might never have needed to travel outside the valley.

Where he did his exploration was in the chook shed, breeding hundreds of Old English Game, Australorp and later Pekin varieties with a keen eye on genetic quality. He was a flock breeder and a numbers man who wasn't afraid of close blood if the pair had attributes he desired - mostly vigour. He never toe punched his chicks as some breeders do to mark the best of the batch but he had a keen understanding of what birds needed to be culled in order to progress a chook to become best in show.

Most people get out of Australorps in the seventies not their nineties. They are a powerful bird and can be difficult to handle. - Keith Dubber

Mr Connor was no stranger to those accolades and with his Australorps claimed three best birds at Sydney Royal and champion soft feather in 18 out of 25 years at the competitive event. At one Sydney Royal Mr Connor was awarded Grand Champion in both soft and hard feather along with male reserve.

"I never met a less arrogant man," recalled fellow breeder Keith Dubber, of Mullumbimby. "He was the best of judges. I never saw him make a mistake."

Mr Connor amassed 60 medallions marking time as a Royal Agricultural Society poultry judge at shows all over Australia, with the exception of Darwin. However, he did visit the far north. When his daughter Pam took them on a train trip from that tropical city to Adelaide aboard the Ghan she pointed out a colourful sunset at Uluru to which her father commented, "I've seen better ones over the Clarence".

While Royal shows in the big smokes of Sydney Adelaide and Melbourne, where he also won champion bird, were a big deal Mr Connor was more impressed with the local competition. The pinnacle of his career - according to the breeder himself - was the 50th anniversary of the Lismore-based Far North Coast Game Club in 2017 when he won grand champion of the show and placed in the top five with a team of Old English Game females.

It was his last show with the vigorous breed and he sold his flock after that to Col McCall of Gympie, Qld and Bernard Jarman of Grafton who are maintaining the line through the same method of tight, selective breeding.

"We were fortunate to get great advice from the man," recalled Mr Jarman. "He told us the need for balance and refinement and to breed to your own standard, not to what others think." 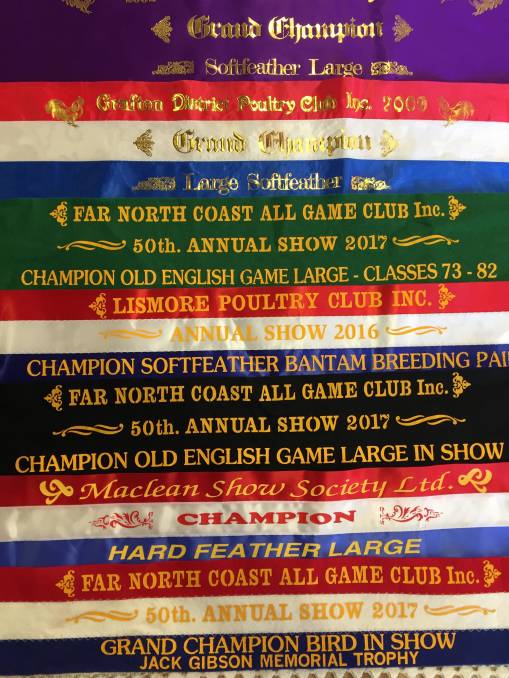 To become the best at any pursuit one needs to enjoy the passion and to drive it down the pitch. Ray Connor

Chooks were just a hobby, of course, the real work came in dairying, a full time occupation from the age of 14 after his father injured an arm. He and his younger brother Dudley milked 100 cows twice a day and at that time in the early 1950s were the largest supplier in the Ulmarra district.

In 1959 Mr Connor gave away dairying for pigs, breeding his own Landrace to his exacting standards. The enterprise was adopted by his son Russell who later established his own Angus stud. The eye for breeding has been maintained through Mr Connor's grandson Murray, who is continuing to breed Angus under the Coolarmagh brand.

The elder Mr Connor was fairly tight lipped about his breeding methods but Murray was fortunate to be on the receiving end of those conversations, recalling how his grandfather would drive out of home directly onto the Pacific Highway, revving the old ute in second gear at 40 kilometers an hour with the blinker still flashing and all the while looking sideways at his grandson passionately telling him about the joys of propagation.

Mr Connor was well remembered for his other love in life - A grade cricket - a sport which was put on hold during his dairying years but which he embraced fully once he got into pigs. As a batsman he continually led his team to victory in the face of certain defeat even as a man in his 60s. As a bowler he was less successful and once commented to his long time friend and cricketer Ken Moran that he had an opposition batsman in two minds. "I was either going to bowl him for a four or a six."