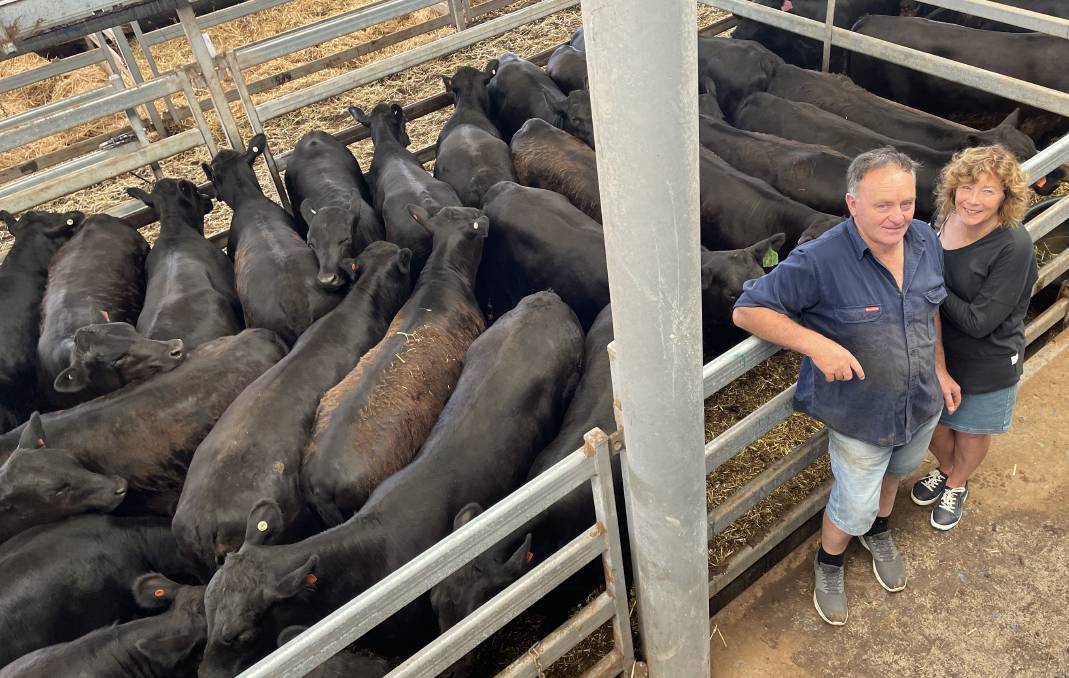 Who were the big buyers at the Wodonga weaner sales?

Northern buyers fought to take home heifers at the North East Victorian weaner sales last week, as producers threw themselves into restocking armed with rain-induced confidence and a return of cash-flow.

The interest saw prices for heifers rival those paid for their brothers. Heifers weighing more than 300kg consistently sold for up to 530 cents a kilogram.

There was a total of 8348 cattle sold across four sales at Wodonga, with another 3000 penned at Wangaratta, which many buyers named the stand-out of the week.

Of the Wodonga-sold cattle, the largest portion, 4407, headed north with 3720 NSW bound and 687 to be trucked to Queensland. There were 3331 head bought by Victorians, including 2120 by local Wodonga buyers, and 586 went to South Australia.

Charlie Hart, Hart Rural Agencies, Barraba, was a volume buyer of the four days, purchasing close to 620 Angus heifers at the Wodonga sales for an average of 470c/kg for 340kg cattle.

"We're obviously still rebuilding our female numbers after 2019 and we use Wagyu bulls across a lot of our clientele so we're quite happy to buy a high-quality Angus heifer," Mr Hart said.

The yardings were back from 14,694 head offered at the 2020 Wodonga weaner sales and Mr Hart said he had to buy at weaner sales further south to obtain the numbers he needed.

However, he didn't have to clock up the kilometres as he deciding to buy online this year via StockLive given the Victorian border confusion.

There were 1226 head sold online across the four sales - that number largely made up of heifers (941), with the huge majority of bidders from NSW (96pc).

Elders Tamworth agent Nathan McConnell attended the sales in person, searching for heifers for clients within a 200km radius of Tamworth.

He said many of their clients had been trading cattle during the past year in order to build-up cashflow following the drought and were now ready to restock.

Mr McConnell said the weight in the yardings had made it a challenging market for restockers.

"We have plenty of clients wanting to secure weaners, but are budgeting on a dollars per head basis which has made it tougher in the current markets with the cattle weighing a good 30kg to 40kg heavier than our ideal weight, which equates to another $200/head," he said.

An excess of grass and concern around feeder cattle supply mid-year led to backgrounders dominating steer competition at the Wodonga weaner sales.

Rangers Valley managing director Keith Howe said they took more interest in the weaner sales this year in order to build up their feeder cattle numbers for the coming winter, with buyers from the feedlot, which focuses on high-quality, marbled beef, spending up to 540 cents a kilogram on Angus steers weighing about 320kg.

"I see the general supply becoming tight with a lot of interest from feedlots and restockers alike," Mr Howe said.

"We're hoping that we can cheapen some of these cattle off by achieving kilos on grass in the next five to six months, in order to maintain a sensible feeder entry (price) point."

The same strategy was echoed by other buyers including, Toowoomba agent, Jeff Garland of Grant Daniel Long.

"There's been very good summer rainfall in these areas so there's a lot of feed looking for mouths and we bought a lot of cattle with backgrounding in mind in order to cheapen them up before they go into the feedlot," Mr Garland said.

"There's no cattle this week and I think that will be ongoing," he said.

"We will see limited numbers for some time through the prime sales."