Petroleum Exploration Licence areas near Gunnedah could be renewed. 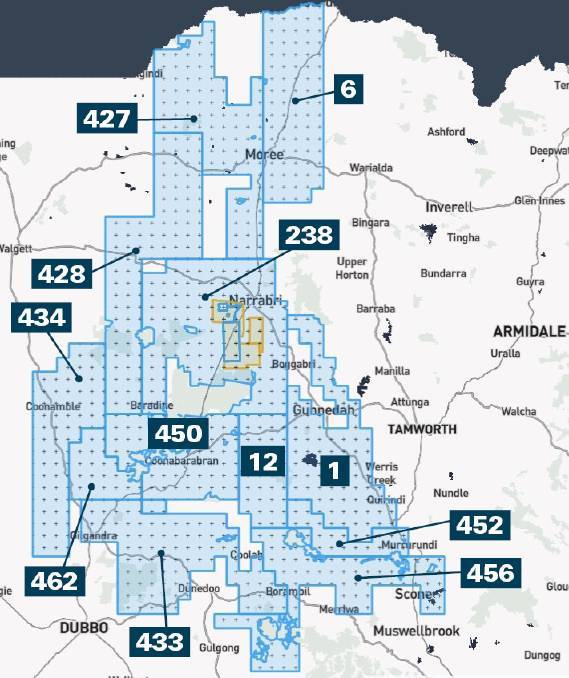 RISING AGAIN: There are concerns 'zombie' Petroleum Explorations Licences near Gunnedah could be renewed following environmental studies being submitted.

ZOMBIES rising from the dead, it sounds like the plot of some B grade horror movie. But in the Namoi Valley and Liverpool Plains it could become a reality in relation to expired Petroleum Exploration Licences (PELs) which are reportedly being mooted for renewal.

Comparing it to a horror movie may seem dramatic, but to say it has been causing nightmares for local landholders would not be an exaggeration.

Many farmers have expressed their concerns across the state in recent weeks after it was revealed there was a renewed interested in some of the PELs following the approval of Santos' Narrabri Gas Project (NGP).

The situation is of particular interest to those around Gunnedah with Carbon Minerals Limited (CML) owning expired licences 1 and 12, which are in close proximity to the town.

On the 22nd of December, 2020, the company released a statement to the ASX revealing they had recently undertaken environmental studies on those sites, and were preparing to submit them to a number of regulatory bodies.

They also suggested further testing was on the cards, and could be conducted prior to any renewal.

"The studies entailed surveys of terrestrial habitats, including vegetation, along potential routes being considered for seismic testing and at potential locations for exploratory drilling," read the statement.

"Initiation of further exploration in relation to proposed seismic testing and exploratory drilling would be allowable in advance of renewed licences for exploration in Petroleum Exploration Licence areas 1 and 12."

PEL 1 begins just north of Murrurundi and continues north-west past Gunnedah, splitting around the Kamilaroi Highway and going all the way up to the outskirts of Boggabri.

The other spans a strip from just north of the Oxley Highway towards Coonabarabran down to an area north of Coolah.

Santos QNT Pty Ltd are in a Joint Venture with CML for these projects, with Santos owning a 65 per stake, making them the operator.

Mullaley orchard, farm and bakery operator, Geraldine McKay, told Australian Community Media that her property could be directly impacted if the zombie licences were renewed and she was worried about the damage it could cause.

She claims previous seismic testing has caused problems at her property, with the process allegedly spooking her horses and causing damage to their bore casting.

Access to aquifers is also something that could become problematic according to Ms McKay, given her understanding it would be lowered by 25 metres over 15 years.

"Our business, our very existence relies on us being able to access that water," she said.

She believes multiple other landholders in the area share her concern, and is urging the region's agricultural community as a whole to research the topic and let their voices be heard.

"We need to be able to be prepared to speak up and stand up otherwise they'll roll straight over us."

However Santos have played down the situation, claiming the recent environmental studies are part of standard procedure and the timing was not in direct correlation to the approval of the Narrabri Gas Project.

Should they eventually reanimate the zombie PELs, it would contradict earlier statements made by Santos Ltd. CEO Kevin Gallagher, who said the area was not of interest to them.

"The Narrabri Gas Project is contained. Our plans are simply not to drill in the Liverpool Plains," he said in 2018.

Both parties will be keeping their eye on Justin Field MLC's legislation which is pushing to have all expired PELs extinguished.