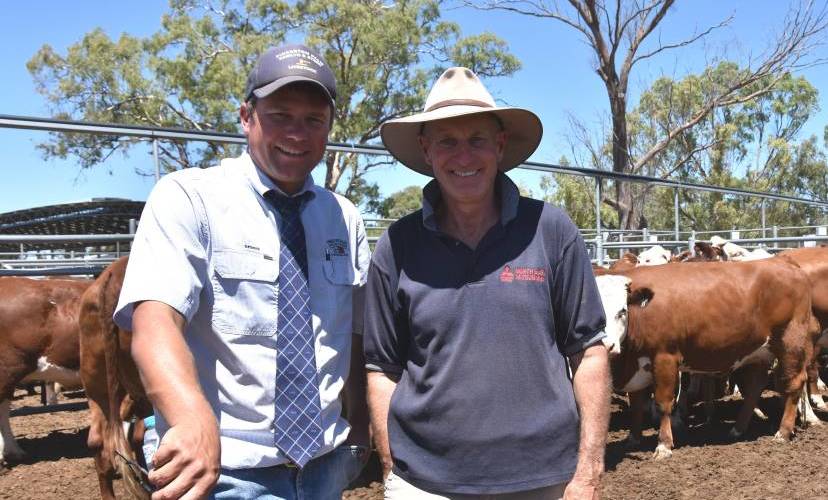 Finding his way around the cattle trade took a few years for former butcher.

From meat marketer to producer of his own top quality beef, Michael Mattei is building-up an Angus-based cattle enterprise at Williup, Hynam, in the Naracoorte region.

Starting his varied career as an accountant, he joined the family's retail butcher business situated in the historic Murray River port town of Goolwa and started to acquire farming land in the 1970s.

During he next decade he bought blocks around Naracoorte because he had visited there with a boarding school friend many years earlier and liked the environment.

"I have to admit that when I first went out looking with the real estate agent, I didn't know much about farming and had to check what a wether was when he started talking about sheep," he said.

Since then, Mr Mattei has amassed a parcel of about 810 hectares on which he runs his cattle enterprise.

He started trading cattle at the age of 33 after spending four years attending the Dublin sales each week to learn about the business - and about farming in general.

"I was called Tony Barber by so many people at the sales because I asked as many questions as the Sale of the Century TV show host," he said.

"I ended up buying some sheep to start with," he said.

"I would buy ewes at about 1.5-years-old, mate them and then sell them as pregnancy tested in-lamb.

"But as I got older, I realised a cattle system would work better for me and for my farm business as a whole."

Mr Mattei said he decided to adopt a similar strategy for cattle.

He aimed to buy-in weaner heifers and young females, join them and market them as pregnancy tested in-calf.

Mr Mattei started with Hereford-Simmental crosses that were in demand from local producers.

But he then switched to Angus females, as these were easy to manage and had rapidly gained in popularity among cattle producers right across South Australia, Victoria and New South Wales.

"I followed this system for 15 years, as I didn't want the hassle of calving-down on the farm," he said.

When buying heifers in the saleyards or through AuctionsPlus online, Mr Mattei said he actively sought-out consistent consignments of "good looking" stock.

"It might sound strange, but I check the face first," he said.

"This seems to be a good indicator of quality, performance and temperament.

Then I look closely at the overall body structure and rump.

"Often I find after inspecting the cattle, that the lines I like are from vendors I have bought from before - but not always."

Mr Mattei said his key to success was to use Angus bulls with Estimated Breeding Values (EBVs) for low birthweight calves and ease of calving.

But he also considered all the important growth rate EBVs.

"I have now built a strong reputation for supplying high quality Angus heifers that will calve easily, but still have fast-growing progeny with highly marketable carcase traits," he said.

Up to 2020, Mr Mattei was trading about 600-head of Angus weaner heifers annually.

He buys at the start of the year, joins them in May-June and then sells (when pregnancy tested) towards the end of the season.

He has now decided to retain about 125 Angus heifers to produce his own calves for the first time in 2021.

"I have seen the success other people around me are having, given the strong market conditions, and I am biting the bullet and giving it a go myself," he said.

"The heifers I chose to keep from last year have some Shorthorn in them.

"So, I will be selling second-cross progeny after they are mated to the Angus bulls."

For the past two years, Mr Mattei has sourced his Angus bulls from JB Angus, which is run by Jock Hislop in Stewart Range.

The stud is in the Naracoorte area, which gives him confidence they will adapt and start work from day one.

"I know the JB Angus bulls are bred for the conditions here on my farm and they are always top performers," he said.

This uses a three-day helmsman selling period and the average prices received were significantly up from 2019, as the Hislop's have continued to build a reputation in the Angus seedstock industry.

"I select the bulls I want primarily based on ease of calving," Mr Mattei said.

"I want EBVs for low birthweight, ease of calving and short gestation period.

"These key traits help me to meet my market for the buyers of my pregnant females."

Margins are an obvious issue of focus for Mr Mattei, who needs to buy-in stock each year.

"That has been tricky to manage in the past 12 months - as prices have continued to strengthen each month pretty much," he said.

"At this time last year I had already purchased 600 heifer weaners.

"Whereas I have only bought about 60 head so far this year.

"This is way behind a typical year, but I will keep some steers to trade and am keeping the 120-head of heifers to calve."