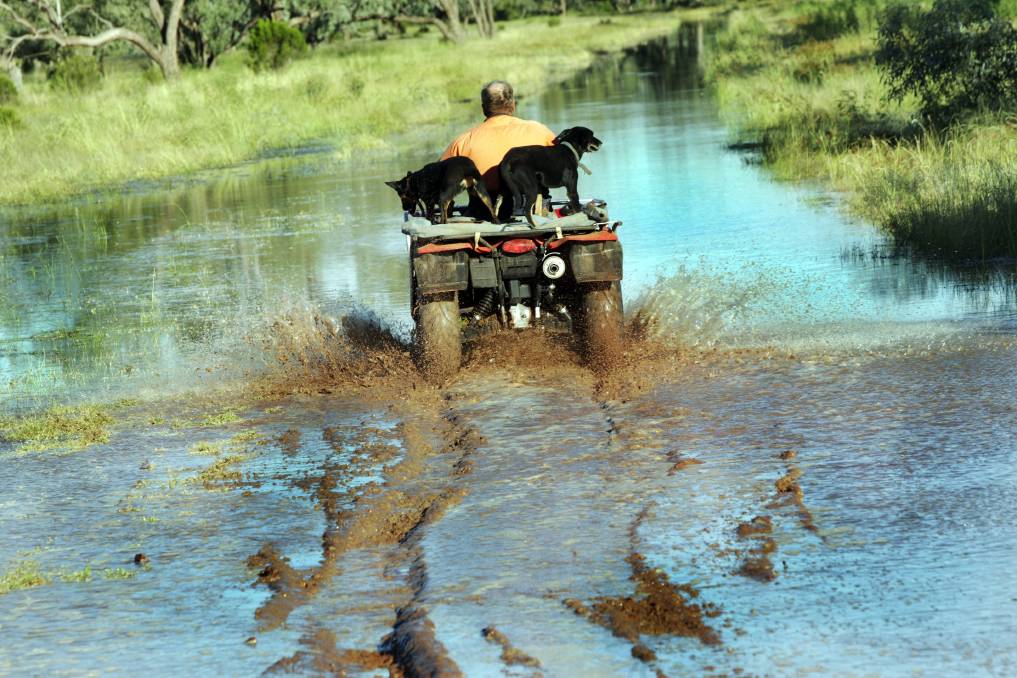 GO ANYWHERE MACHINES: Quad bikes are popular on farms because of their ability to traverse just about any type of terrain including boggy farm roads.

The National Farmers Federation has reiterated its support for compulsory rollover devices on new quad bikes from next October.

Quad bikes could eventually be banned on farms if the federal government backpedals on mandating rollover protection devices from next October.

In a lengthy statement the National Farmers Federation firmly restated its support for a suite of government measures aimed at reducing the number of deaths and serious injuries suffered in quad bike accidents.

The NFF said quad bikes were essential tools for many farmers but unless the death and injury toll was cut they could be outlawed or become prohibitive to insure or legally too risky to use.

On average 16 quad bike-related deaths occurred each year with at least 267 fatalities since 2001, it said.

The NFF and the Australian Competition and Consumer Commission (ACCC) have been at loggerheads with a number of major overseas quad bike manufacturers over the plan to force them to fit operator protection devices on all new and directly imported second-hand quad bikes from October 11, 2021.

The bikes will also have to meet new stability requirements to make them less prone to tipping over in new safety standards for quads recommended by the ACCC and accepted by the government in October, 2019.

Top brands like Yamaha, Honda and Polaris have announced they will abandon the Australian market beyond October 11 which has raised doubts about the viability of many country bike dealers along with fears the vacuum will be filled mainly by cheap but compliant quad bikes from China.

The dealers' plight has been highlighted by Save the Quad Bike in Australia founder Craig Hartley from Dalby, Queensland, and Dean Logan, the CEO of Sydney-based SME Association of Australia which represents small to medium sized enterprises.

Mr Logan said grassroots farmers had been surveyed before Christmas and most of them had disagreed with the NFF's stance on quads.

He said many senior federal Liberal members were also opposed.

"Hundreds of rural and regional dealerships will close as a result of this decision (to mandate rollover protection) when there is a much better alternative," Mr Logan said.

The unavailability of market-leading quads would push farmers into buying more side-by-sides (SSVs) which, while still in far fewer numbers than quads on farms, were involved in just as many deaths, he said.

A campaign built around education and training and potential licensing of riders with farmers still being able to choose whether to fit a protection device or not would have delivered far better safety outcomes across the whole quad bike fleet, he said.

Australia's peak automotive body also has fears about the future of many dealers and supports the need for a tougher approach to training and the wearing of helmets.

The Federal Chamber of Automotive Industries urged the government to reconsider the new regulations, arguing there was a lack of data to support safety claims.

The NFF said it supported the role education and training could play in teaching people how to ride quads more safely along with the need to wear helmets and not allowing children to ride on adult-sized quads.

But it didn't believe these measures alone would stem the unacceptable death and injury toll from quad bike accidents, mainly from rollovers.

While the federal government should stick to its guns on compulsory rollover protection, it should ensure that quad bikes and options for equivalent vehicles from a range of manufacturers continued to be available through financial and regulatory mechanisms, the NFF said.