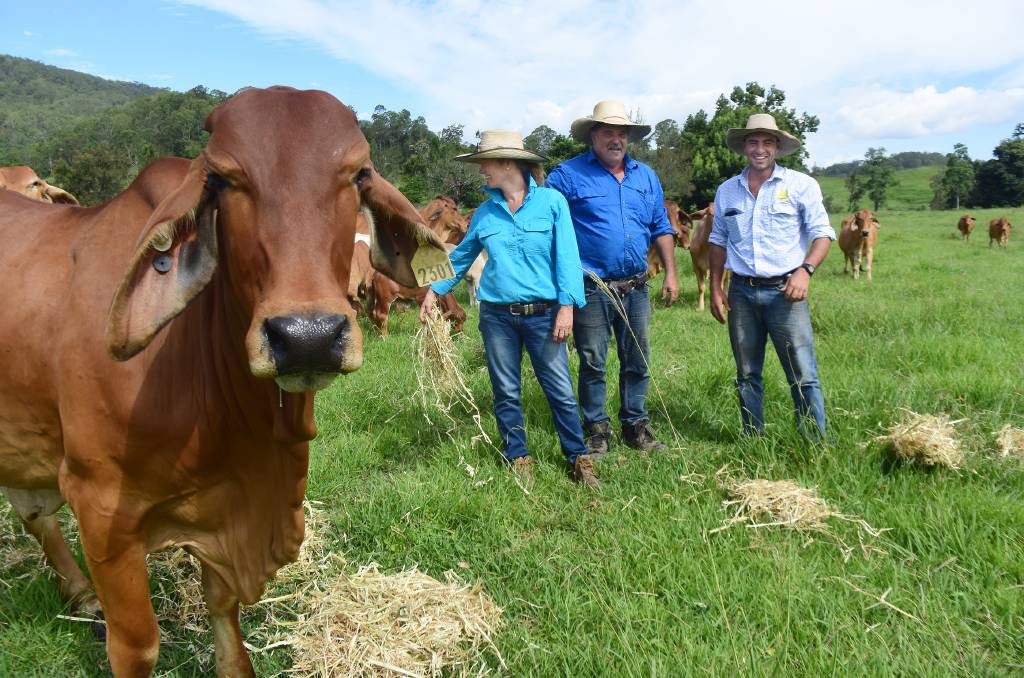 Kyogle Brahman breeders Jo and Grant Bulmer in a lush paddock at Back Creek with their agent Nick Fuller.

Years of falling in and out of tick quarantine has left vulnerable border country graziers frustrated.

North Coast border country graziers caught up in the NSW cattle tick eradication program are frustrated with a continuing and expensive job that offers no conclusion.

Cattle ticks can inject bacteria that cause tick fever, as distinct from red water, and cost the nation $160,000 a year in lost beef production.

The introduced arachnids are particularly rife on the sub-tropical Far North Coast where many producers have introduced indicus to their taurus cows for resilience to ticks. But there's the issue of compliance. Tick sighting must be reported and properties go into quarantine with a full muster and treatment every three weeks.

At Boorabee Park near Kyogle Grant and Jo Bulmer are pleased with the resilience of their stud Brahman cow herd who excel on the lush creek flats. The problem is the constant never ending job of tick control.

"The more cows you run the more chances you have of getting ticks and if you run cattle in the Kyogle and Tweed district it is not a matter of if but when," Mrs Bulmer said.

"And the quarantine system is broken. We have undertaken 50 treatments in the last seven years. This is crazy.

"We find the most frustrating aspect is that not every adjoining property is done at the same time so we seem to go around and around in circles."

The Bulmers have written to DPI expressing their concerns and asking for a review of the program.

"There are other people unhappy with the system," Mrs Bulmer said.

"We can't keep going back and doing this again, and again. If you ran a business like that you'd go broke.

"At one stage we approached the department to ask if we could trial doing a program together with our neighbours, to see if that would be more effective, but that request was denied. We can see that the area affected by ticks is growing with the current the system." At North Tumbulgum, where up and down paddocks border Gondwanaland rainforest and ticks thrive, Blue Maye and his family have been trying to control the pests for a decade. Right now, while the best prices ever are being paid at the nearby Murwillumbah saleyards, this farmer's vealers are locked in quarantine.

"My grandparents selected here in 1906 and until 12 years ago we never had ticks," he said. "Now we treat our cattle every three weeks. It is true that one time we didn't get a full muster and on another there was too much rain and the pour-on didn't do the job. It's rough country here. Sometimes a fence gets washed away. But we get a 100 per cent muster now and we muster every three weeks. Something has changed. With the ticks years ago you'd dip seven times and your cattle would be clean."

The present quarantine arrangement includes a supported visit from a DPI tick officer every time they treat cattle.

"You couldn't fault the service," Mr Maye said. "But it's not working. And sometimes I feel as if it's the teacher talking over me."

At Rukenvale, under the shadow of the Border Ranges, the Nicholls family run a dairy herd and breed show cattle.

"It's frustrating that we keep doing the same thing and nothing changes. There's no new research," Nichole Nicholls said.

"We have a dip and we use it but not everyone is made to dip. Years ago we all did that every three weeks in spring and nobody had ticks."

The department, meanwhile, insists its biosecurity recommendations - particularly around fences and state of repair - are central to successful control.

"There are many producers located along the high-risk area that used to be in the buffer zone who have been tick free for the last 20 years because they have effective on-property biosecurity," a department spokesperson said. "They are effectively managing the risk without relying on six or more strategic treatments to all herds in an area.

"In most instances where cattle ticks were still present during treatment or where reinfestation occurred, NSW DPI investigations identified a failure in biosecurity."

Meanwhile, DPI says it does not know of any resistance to tickicides in current use.

"Almost 90 per cent of our NSW cattle tick eradication programs are based on macrocyclic lactones. Resistance to MLs has not been documented anywhere in Australia. Occasionally, amitraz resistance has occurred in cases linked to movements from Queensland where that type of resistance is common."

Cattle tick and resulting tick fever, as distinct from red water, has killed cattle in Australia since 1872 when imported Brahmans from Indonesia escaped their holding yards near Darwin. Subsequent generations of tick hitched a ride on transported cattle south through Queensland and over the border to the Manning Valley by the time the NSW Tick Eradication Program was started 101 years ago.

NSW has been running its own border control for 101 years, with a tick fence and manned gates. Dipping was mandatory and everyone had to do it. The ticks were kept under control and from 1937 to 1999 the area of North Coast under control shrunk ten times as the cattle tick was marched back into Queensland and the North Coast declared tick free.

Funding cuts undid a lot of that work. The issue of contaminated dip site soil was big at a time when coastal subdivisions were sprouting on farm land and health issues with tick staff handling chemical became commonplace. It is no wonder things have been let go but now border graziers are calling on government to re-invest in the program for the sake of agriculture.

What should producers do? Errol Steinhardt at Oakey Creek and Widgee, near Rathdowney, Qld, makes good use of a spray race to treat cattle quick and efficient. "I remember dipping for ticks when I was six," recalled the 86 year old.

Spray race works over the border

Just over the border in Queensland 86 year old Errol Steinhardt can remember dipping his first draft at the age of six and he has been doing it ever since.

He used to dip - with arsenic back in the day - but uses Amitraz and water in a spray race and has modified his, after it corroded and needed repair, so that the powerful nozzles direct tickicide into the ears as well as the underbelly. A 20 horsepower electric pump recycles the mix at 88,000 litres an hour with a sump to separate any manure.

Key to the operation remaining successful is to use fresh chemical, he says.

"The trouble with ticks is it's something we've got to live with," he says.

"But it's not cheap," he warns. "The beauty of the spray race is that it doesn't cost a fortune to charge up. I wouldn't have a dip again. The spray unit is cheaper."

But a dip is better

Long term studies carried out by the NSW Board of Tick Control proved with data that dips killed more ticks than spray races because the full plunge saturated every orifice. As a result all cattle leaving the border zone are dipped after sale in a plunge race.

Tick control a long and involved history in NSW