Records were rewritten in every aspect on Saturday when the 12th annual NSW Wiltipoll combined breeders sale broke every record in the book. THE small in numbers Wiltipoll breeders community in NSW were in celebratory mood at the end of the 12th annual combined breeders sale as they added up the totals and divided them by numbers to find records broken in stud ram, stud ewe and commercial ewe categories.

This small and to-date not so influential breed had come of age as more than 100 breeders flocked to the Des Campbell Memorial sheep pavilion at Gulgong showground to be a part of the breed's lift in popularity and certainly in record breaking success. 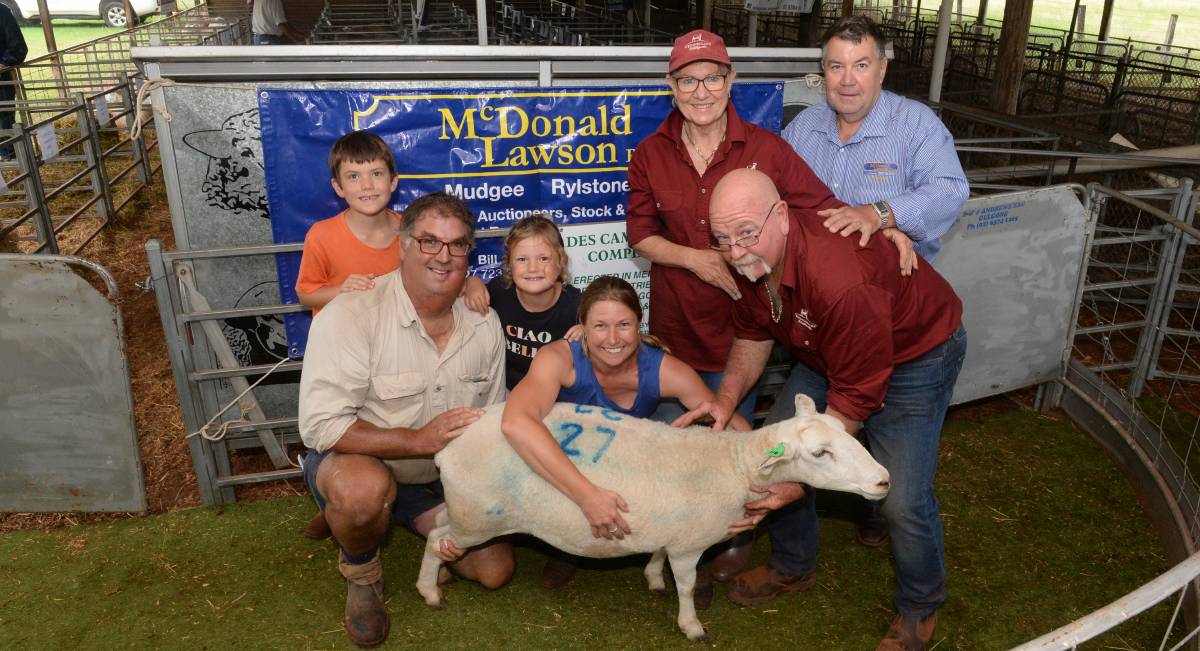 Six studs presented rams and ewes in the catalogue with every animal sold at auction.

Commercial ewes were also keenly sought after with all 20 selling in pairs topping at a record $850 eight times, to average a record $800.

They may have retired and downsized in acreage, but Des and Gloria Houlihan, who earlier had the Peppercorn Park stud farm of 283 hectares, then moved nearby to Mandagery View stud of 36ha, Manildra, outbid all comers for the top-priced ram, paying the record money of $3700.

This was for Westmoreland Green 155, a son of Lone Pine Blue27 and from Westmoreland Yellow 44, bred and offered by Julie Huie and Jeff Lucas, Westmoreland stud, Wisemans Creek.

The Houlihans are currently running close to 70 ewes with Mr Houlihan saying they only wanted to breed and sell the best the Wiltipoll breed could offer,

"We'll join tis ram to our best ewes to continue to increase the quality of our flock," he said.

In a joint partnership the Ferrier and Rinaldo families of Clergate, Orange, combined to pay the record $1250 price for the top stud ewe.

This was for Westmoreland Green 158, also by the Pine Hill sire bred and offered by Julie Huie and Jeff Lucas.

Jeff and Ellie Rinaldo run the Colla Collina stud established by Mymms Farm Wiltshire Horn and Connivale stud animals which they purchased when both studs dispersed.

The recently introduced some Queensland genetics with a ram from Jonala stud, Canina, Qld.

The Manning Valley Anglican College, Cundletown, will be establishing its own Wiltipoll stud after Scott and Megan Saunders purchased four stud ewes on the college's behalf, paying to $750 and a $663 average.

The sale was conducted by McDonald Lawson, Mudgee, with Andy Carter the auctioneer.