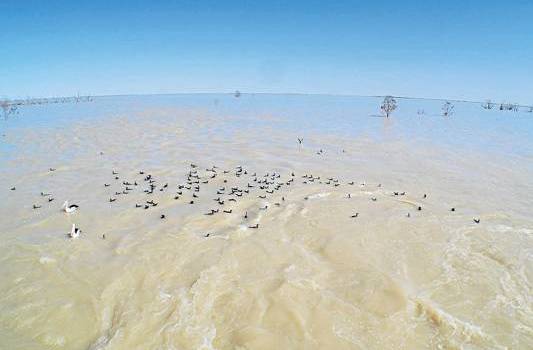 NSW Irrigators' Council CEO Claire Miller says the Murray allocation "blackbox" must be cracked open and examined now we can no longer rely on the Menindee Lakes to contribute to downstream demands.

Will licencing floodplain harvesting get Menindee Lakes back "online"?

Ms Miller said she had crunched WaterNSW and Murray Darling Basin Authority data on Northern Basin inflows (measured before extraction for towns, stock and domestic and irrigation) and Menindee volumes to find, due to reduced inflows and fewer floods in the last 20 years, the Menindee Lakes can no longer be relied on to underpin Murray allocations.

The volume of water at Menindee Lakes must hit the "magic" number of 640 gigalitres to trigger the lakes' inclusion in the resource available for Murray allocations and contribute to South Australia's annual entitlement of 1850GL. 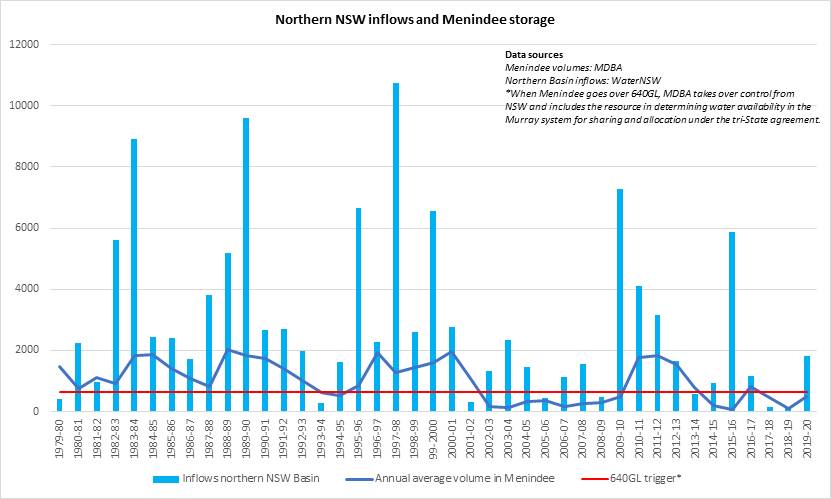 "We're seeing floods are happening less frequently and they are not as significant when they do happen," Ms Miller said.

"Obviously, we've had two extremely severe droughts in the last 20 years, that's clearly the major factor driving the reductions in the inflows across the Basin.

"But that warming, drying trend is consistent with the scientific forecasts for climate change...if those trends hold true that's a very serious challenge that we're facing."

Ms Miller said reducing floodplain harvesting back to the 1994 Cap levels, and licensing and metering the reduced take, will ensure more water stays on floodplains and in streams and creeks when it does flood.

While, in between floods, new rules such as the Resumption of Flow rule on the Barwon-Darling, will help protect first flows after prolonged dry periods.

If Menindee is going to be "offline" more often that does put so much more pressure on the Murray resource alone to meet all the demands... - NSW Irrigators Council CEO, Claire Miller

However, she believes it will not be enough to compensate for fewer floods - "that's a cold, hard hydrological fact."

"So the proportions haven't really changed, despite the growth in capacity to capture floodwater. What has changed are fewer floods and lower inflows." 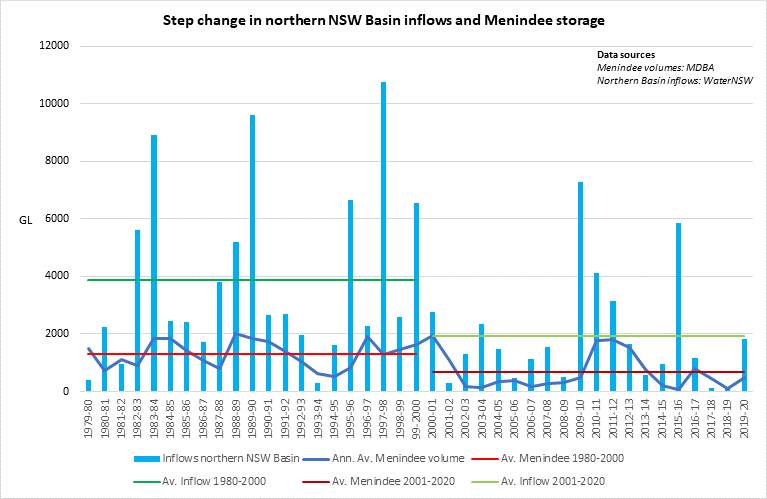 Ms Miller said the Murray "allocation blackbox" must be cracked open to analyse the cumulative impacts of these and other drivers on general security reliability.

"If Menindee is going to be "offline" more often that does put so much more pressure on the Murray resource alone to meet all the demands, including South Australia's minimum entitlement," she said.

"Over the last 20 years we've seen a series of water reforms and policy decisions, some of them in response to the Millennium drought, others informed by the Basin Plan, others that are in response to market demand.

"Each of them have been put into the allocation framework for the NSW Murray resource and nowhere have the authorities or agencies analysed what's the cumulative impact on general security allocation."

Ms Miller said they were supposed to report on that impact annually under the National Water Initiative but hadn't in 16 years.

"We need to have an honest conversation with the water users in that valley," Ms Miller.

It's a conversation the Murray Darling Basin Association supports, chief executive officer Emma Bradbury said government, water users and communities needed to look at how we establish certainty in an uncertain future.

ESTABLISHING CERTAINTY IN AN UNCERTAIN FUTURE

"Inflows into the system have halved in recent decades and that requires all of our water users to look at how we approach the future in terms of water security," Ms Bradbury said.

"As long as we're relying on governments to make fair allocations without participating in that conversation, we're on the wrong path."

However, Southern Riverina Irrigators chairman Chris Brooks, who represents members from the Murray Valley, argues that floodplain harvesting in the Northern Basin needs to be tightened further in order for the Darling to regularly flow and contribute, alongside the Murray, to downstream demands.

"Historically 39 per cent of South Australia's 1850GL entitlement came down the Darling and that equates to 720,000ML which now has to come out of the Murray system, that's 360,000ML out of the Murray general security, and that impacts our allocation," he said. "They've allowed this floodplain harvesting to continue to develop and have refused to comply with the 1994 Cap that was put in place.

"They now want to gift them a licence...and that effectively shuts down the Darling."