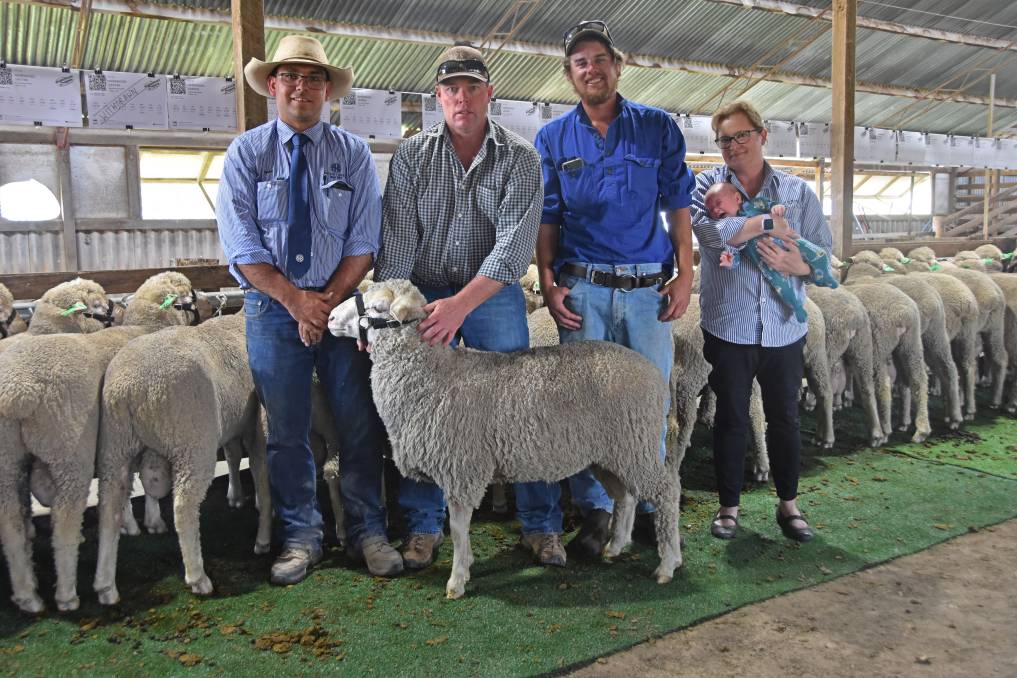 Buyers from as far away as Victoria flocked to the annual Armidale sale.

BUYERS from across the state and as far away as Victoria flocked to the annual Harewood Dohnes ram sale on Friday afternoon.

Competition between the 14 registered bidders was hot as 34 of the 39 rams on offer were snapped up at an average of $1282.

Luke Heagney of Armitage and Buckley Livestock had the auctioneering duties during the live auction and had to wait until lot 36 to knock down the day's top selling ram for $4400.

The Saunders family of Inverinate, Wollomombi took home the top-selling ram, as well as two others at a total average of $2166.

"My son Nick picked him out and it's because his statistics were really good," Inverinate principal Kate Saunders said.

"These rams are going to go over Merino ewes and then those ewes will have White Suffolk put over the top of them.

"We want a bigger sheep with better wool than a crossbred and we feel as though this is the best way to go."

The quality of the stud's rams drew interest all the way from Victoria, in the form of Tim Buxton of Maristow, Stratford, who purchased two rams at an average of $1600.

"We're having a very good season, in some ways it's too good because we haven't got enough stock to keep on top of the grass growth," Mr Buxton said.

"These rams will be joined in March, we're running with a Merino cross at this stage, but we thought we'd get some Dohnes in to get some more shape in them, more early maturity and in turn sell them.

"We'd heard these guys had good quality rams and it was certainly worth the trip."

Despite travelling the greatest distance to attend the sale, Mr Buxton was not the day's busiest buyer.

That honour went to the White family of Lanova, Narromine, which purchased seven rams at an average of $1471.

Other notable buyers included Glendale Farming and the Finlayson family of Oaklands, Narromine, both buying five rams at an average of $940 and $900 respectively.

Harewood Dohnes stud principal Justin Tombs said he was delighted with the outcome of Friday's sale.

"It was really pleasing to have a lot of return buyers from all over as well as plenty of locals," Mr Tombs said.

"Seeing some new faces come along was pleasing as well and I'm happy they were able to come away with something they wanted."

Mr Tombs said the improved seasonal conditions across the Northern Tablelands "made a massive difference" in the preparation of this year's rams.

"This year's average was up on last year's, which is a nice bonus and I reckon the conditions have got a lot to do with that.

"At the moment it is a lot better than 2019 and hopefully it can keep going throughout the year."