Are there still aspects of the livestock industry which are a "man's world"? 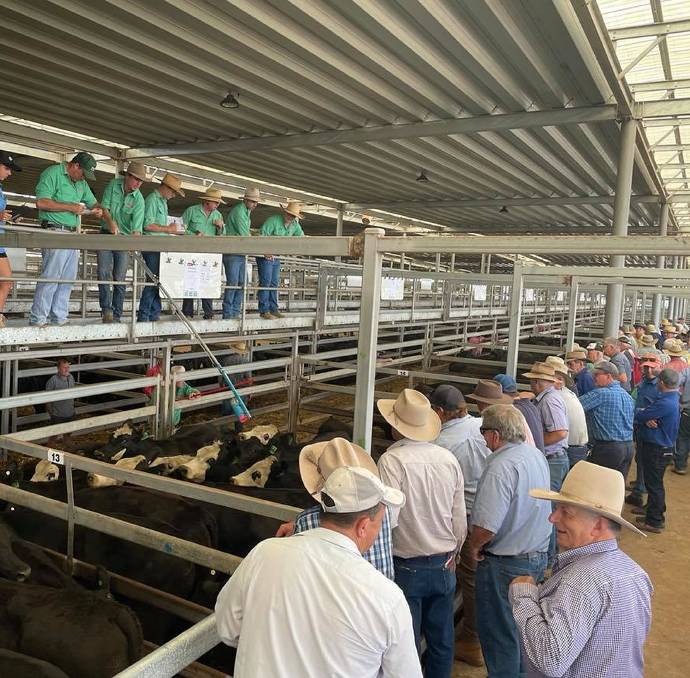 Can you spot a woman? There are some parts of the livestock industry, like the saleyards, where women remain a rare commodity.

The saying "women make the world go 'round" is a term that would only be disputed by the bravest of men these days.

But it doesn't always equate to women being front and centre, especially in industries like livestock where women have traditionally performed a more background, albeit crucial, role.

Now, that is starting to change.

Take a look in the auctioneering rostrum or inside the board room of breed associations and industry groups and there are women who are sitting front and centre.

Since 2019 the Australian Wool Innovation board has been led by chairman Colette Garnsey OAM, one of two women on the seven person board.

Chairman Trish Worth is the only female on the eight-person board of Hereford Australia, a gender ratio shared by Angus Australia. Elders Albury auctioneer Kirsty Taylor picked up the gavel four years ago and hasn't looked back. She is one of an increasing number of female auctioneers.

However, despite the number of women in representative or public roles increasing, quotients fall far short of being even and there are aspects of the industry that still appear to be a "man's world."

Often when I am interviewing agents after a sale they will unconsciously say something along the lines of "Blokes were chasing cattle..." or "There were fellas with sheep from..."

I don't think they're being sexist by using descriptions exclusively reserved for men, it's just that they are used to predominantly dealing with male clients, buyers and agents.

When you look around a saleyard the male to female ratio is still often one to 10, at least, and in 2021 there are few other workplace environments which would be so skewed towards one gender.

So what is it like being a woman currently working in a male-dominated role in the livestock industry?

Elders Albury auctioneer Kirsty Taylor picked up the gavel four years ago and hasn't looked back.

As one of the few female auctioneers in the industry Kirsty is often the topic of columns or articles like these, but she's happier out of the spotlight, getting back to the job at hand - being a good agent and auctioneer.

When asked what she would tell other women looking to enter the industry, the advice was simple - "Don't be afraid to have a go, align yourself with good people, do a good job and you will earn the respect from everyone around you".

If Jacinda Ardern can do it...

It is a very similar refrain to Bea Bradley Litchfield of Hazeldean Merino and Angus stud at Cooma.

Bea says the huge majority of people she interacts with in the industry treat her with the same respect they would her dad, Jim or husband, Ed.

"Occasionally people who don't know me from a bar of soap will assume they should be talking to someone else, but it doesn't take long before they pick up on it."

Bea said being a woman in the industry is more prudent now she's about to have a baby, but if the Prime Minister of New Zealand can run a country with a baby she can be a farmer with one.

Some would argue there is a tricky balance between promoting and facilitating women to make strides into traditionally male-dominated industries and treating women as equals to men.

It is often rightly celebrated when organisations make a conscious effort to include more women, however women are then forced to work harder than their male-counterparts to avoid assumptions that they only got their role because of their gender.

While it is challenging to be one of the "first" or "few" in any world, it seems that if you simply do a good job, whether you have a Y or an X chromosome quickly ceases to matter.