WESTERN DISTRICTS Exhibit stalwart, Tom Dwyer, has hung-up his battered old hat and called it a day after 58 years and past several as manager.

Tom Dwyer was one of 18 people from Forbes to Condobolin with a baby and a kelpie reproduced in coloured wool.

BACK in 1962 Tom Dwyer and his brother John, known as Pat, grew a crop of Whistler wheat which placed third in the Royal Agricultural Society of NSW (RAS) Wheat Crop Competition.

The paddock was on the Dwyer family's 512 hectare Pleasant View property at Bogan Gate and the crop yielded 5.4 tonnes a hectare.

It was the best crop ever grown on the place, according to Tom.

He was on the farm for some 42 years producing grain, pigs, and running a seed cleaning business 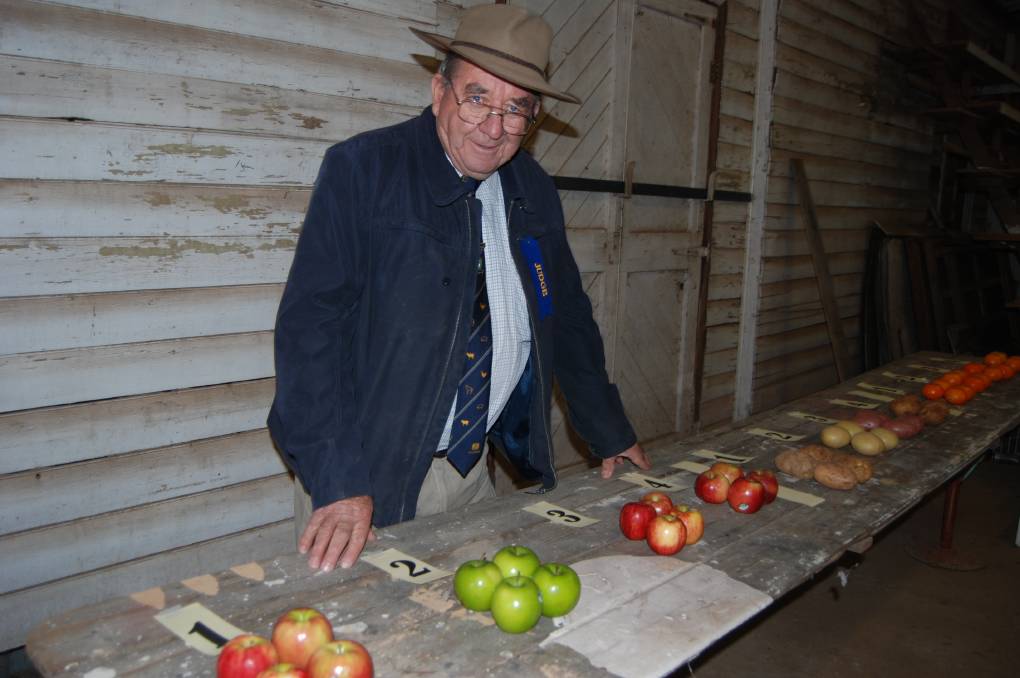 Judging fruit and vegies and tutoring young judges was Tom's forte' for more than 40 years.

But it was that year when Tom, known fondly to many as "Uncle Tom", began his career as a volunteer with the Western District Exhibit Association (WDE).

To collect the trophy the Dwyer brothers had to submit a sample for the 1963 Sydney Royal Show.

It was through the seed cleaning business that Tom got the collector's bug for samples of clients' grain and send them to Sydney for the district exhibit judging.

The Dwyers, however, won eight grain competitions while he was on the farm.

Through the years Tom's role changed and he became one of the grain coordinators for the WDE.

"I got a taste for it and got involved. It just grew from that little beginning," he said.

The wide area from which the Western District court (at Sydney Royal Show) draws its entries covers just under half the state from Coonabarabran in the north to West Wyalong in the south, North Sydney in the east and to Broken Hill in the west, and Tom travels some 15,000 kilometres each year on his collection run for samples of cereals, pulses, oilseeds, melons, fruit, vegetables, hay and grasses for the annual exhibit.

And to his credit, which certainly goes with his personality and good humour, he has never been refused a sample in all those years.

"Farmers are very generous," he said.

"I believe it's a big thing, especially through the drought and difficult years."

In his multi-tasking role, after collection, Tom would clean the grain then hand-pick through it under a microscope to choose the final sample.

Tom said what he liked best about collecting the samples, was his visits to farmers on their properties and meeting new people.

To know Tom Dwyer one must experience his contagious sense of humour and his jokes, which empowers his presence.

Tom is a living legend, and was awarded a Sydney Royal legend only a couple of years back, and that would have to be proof of his character.

He was one of 18 people from Forbes to Condobolin including a baby and a kelpie reproduced life-size in coloured wool as a 10 metre backdrop of the WDE at the 2012 Sydney Royal Show - local farming characters in the Year of the Farmer.

The backdrop was the brain-child of resident designers headed by Rosie Johnstone of Forbes and Liz Ridley of Corinella.

Liz Ridley said at the time they knew that year's display had to have a "rather large impact on the backdrop" that would get people's attention straight away when they saw the display.

"It had to be pretty dramatic," she said at the time.

The farmers were reproduced in texture of the wool and was so cleverly done by breaking it down into six tonal values classed into black, white and four in between.

In 2015 the backdrop, which had been utilised at Dubbo Show after Sydney, then became a permanent front window display at the Spotlight store, Forbes.

One of Tom's closest friends, was another WDE stalwart and agricultural show legend, the late Les Clarke of Dubbo, who was also a manager of the WDE.

Les took Tom under his wing and taught him many valuable lessons and tricks of the trade of the "behind the scenes" success of the district exhibit.

There was many a show the dual would be seen with their eyes out for new specimens that would fit the Sydney display.

Fundraising was also part of the job during the Royal Show.

Les helped get the district exhibit in a good financial position, and one of the income earners during the show was cutting apples into slices with his pocket knife and as families passed, he would offer the kids a slice.

Tom said seeing the kids enjoyment of receiving a treat, the families would purchase bags of fruit and vegetables.

"Health and safety regulations, plus illegal possession of a knife would prevent that from happening these days, but we made a lot of money during the show in those years," Tom said.

For more than the past couple of decades Tom has eased back into the coordinator's position of the ASC/Suncorp Bank Dryland Field Wheat competition, and even though there are times he has to question himself as to the actual location of a crop finalist property, there's not much of the state's wheat belt that Tom doesn't know or hasn't travelled.

He remembers well, all the crop seasons, and reckons 2020 was definitely the top.