After a recent spike, fertiliser prices may subside by the end of quarter two.

Global fertiliser markets have erupted in recent weeks, and taken most in the market by surprise.

Local farmers, who are currently buying phosphate ahead of the new winter crop season, are in the firing line - from both a price and supply perspective.

Through the back half of 2020, global phosphate prices have slowly climbed off 10-year lows.

But since mid-January, the market has flared to above the 10-year average price.

This year alone, US Gulf Di-Ammonium Phosphate (DAP) prices are up by 36 per cent. 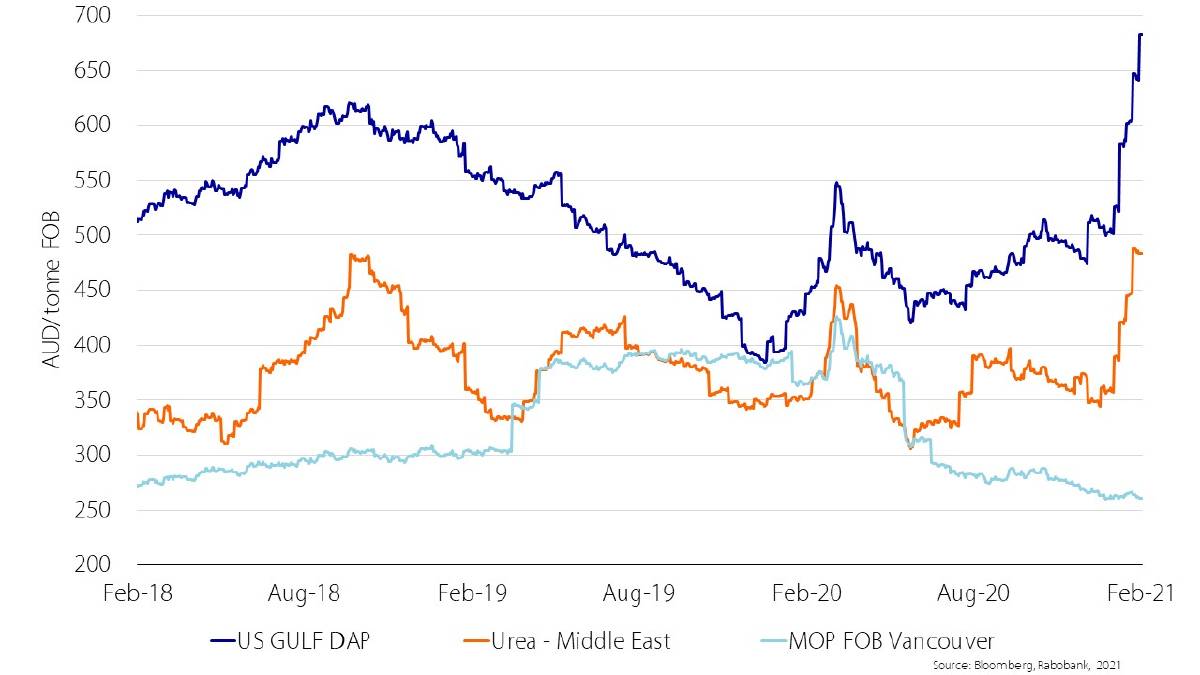 This DAP movement is well and truly a demand-led rally, exacerbated by some short-term supply challenges.

In late January, prices for major Chicago Board of Trade (CBOT) grains and oilseeds climbed to their highest point since 2014.

Improved fertiliser affordability has prompted farmers in many key regions to buy-up.

This demand activity has been most pronounced in the US, where - after years of low and, in some cases, negative margins - farmers have taken this opportunity to replenish soil nutrients ahead of planting a new crop.

On the supply side, numberous factors have contributed to the spike.

Most significantly, the US Department of Commerce has published countervailing duties as high as 47.05 per cent against phosphate fertiliser from Morocco and Russia - following a petition filed last June.

This has caused US domestic prices to rise faster than other international benchmarks.

Adding fuel to the fire is the fact that Chinese phosphate exporters have faced rising costs of raw materials and tight domestic supply.

In Australia, China's share of our mono-ammonium phosphate (MAP) imports has been increasing year-on-year since 2017 and reached 64 per cent in 2020.

Also, quarter one is typically quieter for international imports compared with other times of the year.

So, the unexpected high demand has caught some suppliers on-the-hop and scheduled maintenance has impacted on their production levels.

Some global suppliers are now fully booked until April, and others are unclear about the next available cargo.

All of these factors leave Australian growers, who are mostly reliant on the global market for phosphate supplies, in a precarious position ahead of the new season.

For growers, the necessity to lock-in phosphate prices at these higher levels may be dictated by two main issues.

The first is what the likely impact will be if phosphate availability doesn't improve before seeding and can phosphate application be shifted to where it is needed most.

As of December 2020, local MAP imports for this season were well ahead of the past four seasons - although, phosphate availability will vary between suppliers according to origin and location.

Our expectation for average to above average local wheat prices will help purchasing power, although it does equate to reduced affordability year-on-year.

As we had forecast back in early January, we still expect global fertiliser prices to subside by mid to late quarter two as Northern Hemisphere seasonal demand eases. This should prompt local prices to return to favorable levels.

This, though, may be too late for local growers, who start seeding in April.