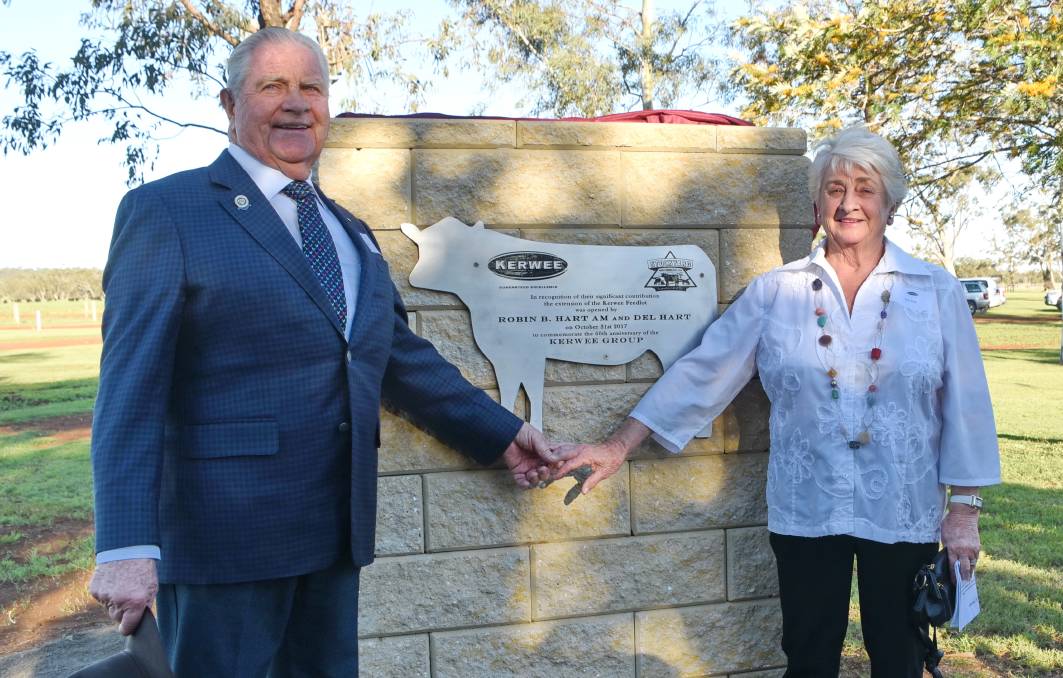 Robin and Del Hart are pioneers of the lotfeeding industry, establishing Kerwee Feedlot in 1965.

ROBIN Hart became a pioneer of Queensland's feedlot sector in the late 1960s after recognising the enormous potential to supply high quality Australian beef cuts into the lucrative Japanese market.

The founder of family-owned and run Stockyard Beef and its Kerwee feedlot on the Darling Downs had rare early exposure to Japan when he toured the country as a board member of the Amagraze processing and pastoral company - set up by United Kingdom-based Vestey Holdings.

Along with other Australian graziers and English investors, Robin's accountant father Byrne was a founding shareholder in Amagraze, which bought and operated properties in north west Queensland, processing interests at Biloela and Cairns (Queerah) andca boning room in Brisbane.

At the time, Robin was working as a station manager and became involved in cattle breeding and backgrounding of mainly Santa Gertrudis cattle - which were relatively new to Australia.

When he married Del Langmore in 1957, the pair bought the Kerwee property near Eidsvold and invested in their own Santa Gertrudis bulls, which they mated to quality Shorthorn cows.

Robin visited Japan, the United Kingdom and other European countries with Amagraze to investigate opportunities to sell beef into these markets.

Robin's son Lachie, who is now managing director of Stockyard Beef, said this trip opened his father's eyes to the potential of marketing beef to a massive population that was focused on consuming top quality products and brands.

"Dad also quickly realised that if he could sell beef to the exacting specifications and standards demanded by the Japanese, he could sell anywhere in the world," he said. 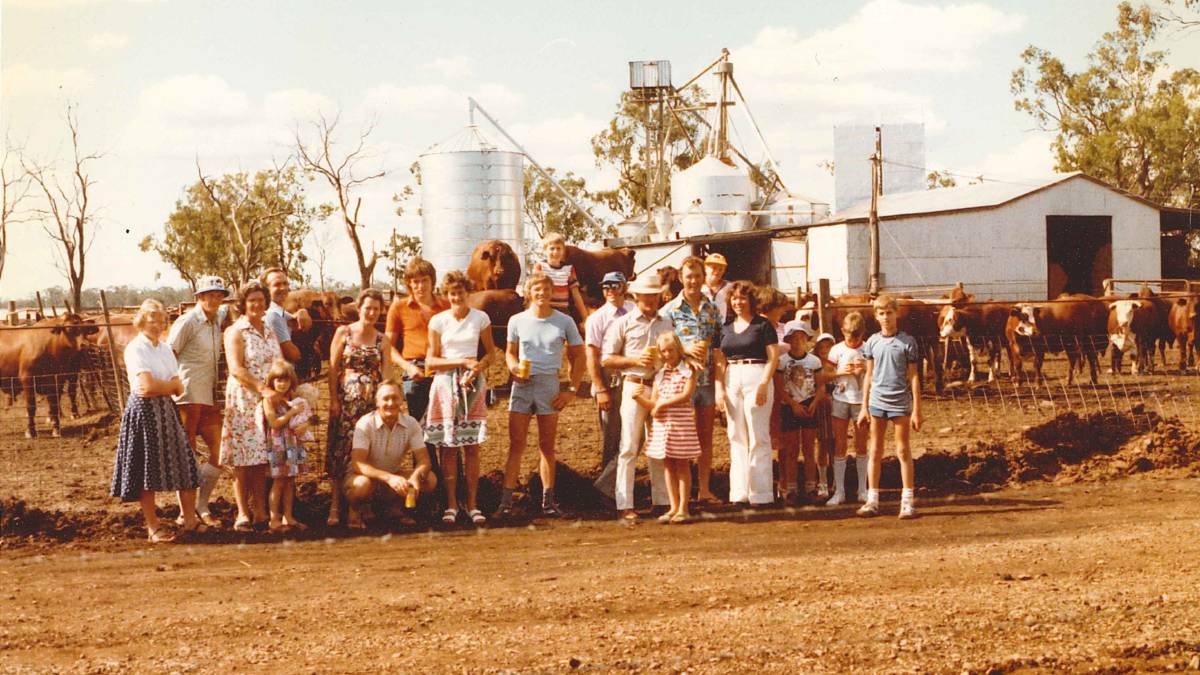 The Kerwee Feedlot was set up on Robin and Del Hart's Kerwee property, near Eidsvold, in the late 1950s and was initially used to fi nish their Santa Gertrudis-based stock.

After his travels, Robin and Del commercialised their feedlot at Berwick, Jondaryan, and fed consignments of about 200 head of cattle for domestic slaughter and retail butchers.

They also used these facilities to finish their own mostly Santa Gertrudis-based cattle for Australia's first chilled grain-fed beef export products to Japan.

Amagraze was also supplying its cattle into this market, which had been taking grass-fed Australian product for some time but was subject to strict government quotas (which persisted until 1991).

He said from this foundation, his family's company had grown into one of Australia's leading feedlot operators, one of the most modern beef finishing facilities in terms of design and technologies used and the longest-running feedlot under single ownership in Australia.

Robin was appointed a Member in the General Division of the Order of Australia (AM) in 1999 for his services to the Australian beef industry, and was the ALFA inaugural winner of the Elanco Outstanding Services to the feedlot industry award in 2005.

These accolades partly celebrated his specific efforts in engaging with Japanese customers, getting to know their culture and building business systems there.

Recognising the big potential in Japan early on prompted the Hart family to start lotfeeding on a more serious scale and, in 1973, they set up the Stockyard Meat Packers company to achieve that goal. It initially involved other eastern Darling Downs lotfeeders, including Dugald Cameron, from Aronui feedlot near Bell; Don Bridgeford, from Mungala feedlot near Warra; and Uen Morgan's Lillyvale feedlot, outside Condamine.

The business model was designed to minimise risk by developing back-to-back marketing through a brand.

This meant beef consignments were sold prior to the point of delivery and supplied through a closed vertical and traceable supply system.

The Hart family regained full ownership of Stockyard Beef in the late 1970s and continued to focus on improving the brand's quality through improved genetics and feeding skills.

Mr Hart said they were the first lotfeeders in Australia to finish and export Wagyu cattle to Japan.

The Wagyu stock was sourced from their own breeding herds and through direct supply relationships with other producers along the east coast of Australia.

"Stockyard Beef now has a small purebred Wagyu herd and the plan is to grow this in the next five to 10 years," Mr Hart said.

"In the meantime, we are also getting cattle from several other breeders and backgrounders that we have developed strong relationships with for this range." 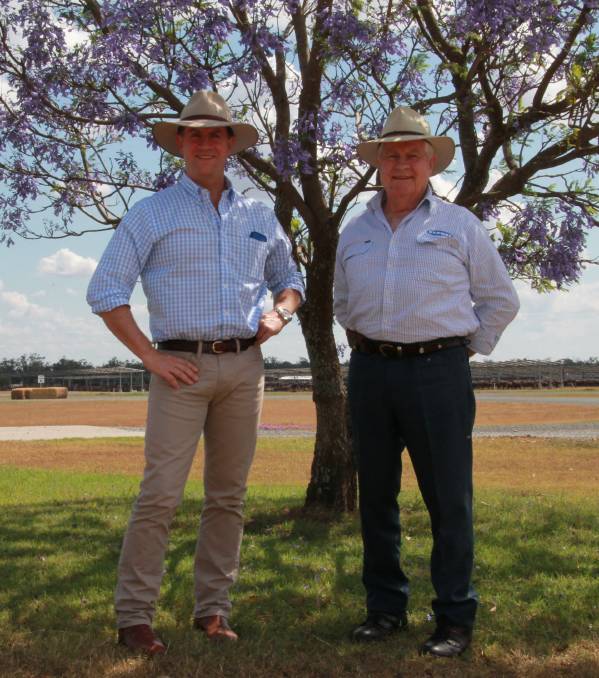 Today, the Stockyard Beef company continues to be owned and managed by the Hart family, with the third generation now joining the business.

It is structured and governed by a skills-based board that comprises a diverse range of directors.

Diversity is a company philosophy that is applied to all aspects of operation - from cattle production through to management and director appointments.

"One of our previous feedlot managers - Jim Cudmore - really highlighted to us the benefits of women being more involved in lotfeeding, as he recognised their natural affinity and skills in working with livestock and machinery," Mr Hart said.

A focus on growth

At an operational level, in the past five decades, Stockyard Beef has expanded its Kerwee Feedlot from 5000 to 20,200-head capacity.

This included a significant investment in 2017 that led to new feed pens and the building of an upgraded, state-of-the-art feedmill.

This was one of the first steam flake mill plants set up in Australia and designed to boost the nutritional value of the cattle ration.

As the second - and now third - generation of Harts became more involved in the family business, its production systems, infrastructure, brands and markets have been further developed and the business focus is now firmly on Wagyu and Angus beef lines. Expansion of the Kerwee Feedlot started from the 1960s and continues today, with the next phase to proceed in early 2021.

Integrated supply chains have been set up from the feedlot to more than 20 major chilled beef export markets in Japan, across Asia, the Middle East, north America, Europe and increasingly, the United Kingdom, following Brexit deals.

The Stockyard Beef brand has also become a household name in the domestic supermarket and retail butcher sectors across Australia.

Mr Hart said 2020 had been challenging for the company due to COVID-19 lockdowns effectively shutting the door - overnight in March - on the restaurant trade in all of its key global markets.

At the same time, there were major disruptions to air freight and shipping services.

But Mr Hart said, fortunately, beef as an essential food product had held-up very well compared to many other industries.

"There were positive global mega-trends in play for the beef sector before the pandemic really hit in March, and these have persisted to help underpin a continuation of the chilled trade out of Australia," he said.

"This included increasing demand for high quality beef from a rapidly growing middle income-earning sector in Japan, Korea and China - and in other parts of Asia.

"Consumers there are buying more meat-based protein as their wealth rises.

"Despite not being able to go to restaurants for much of this year, they have still been sourcing premium meat cuts from retail butchers, supermarkets and newly created online distribution channels." Click on this image to read more about the Australian Lot Feeders' Association.

"Despite the politics in play, Asian markets - including China - are willing to import our beef and we are just having to navigate government protocols carefully," he said.

The Harts were one of Australia's first chilled beef exporters to China, but have always taken a cautious approach to expanding this market too rapidly.

"So, it is important we have contingency plans to be able to divert supply to a range of global markets.

"China was taking about 10 per cent of our chilled product and, through our established relationships elsewhere, we have been able to place that beef in other countries."

Mr Hart praised the Australian government for its response to challenges associated with air-freighting chilled product overseas during COVID-19 lockdowns.