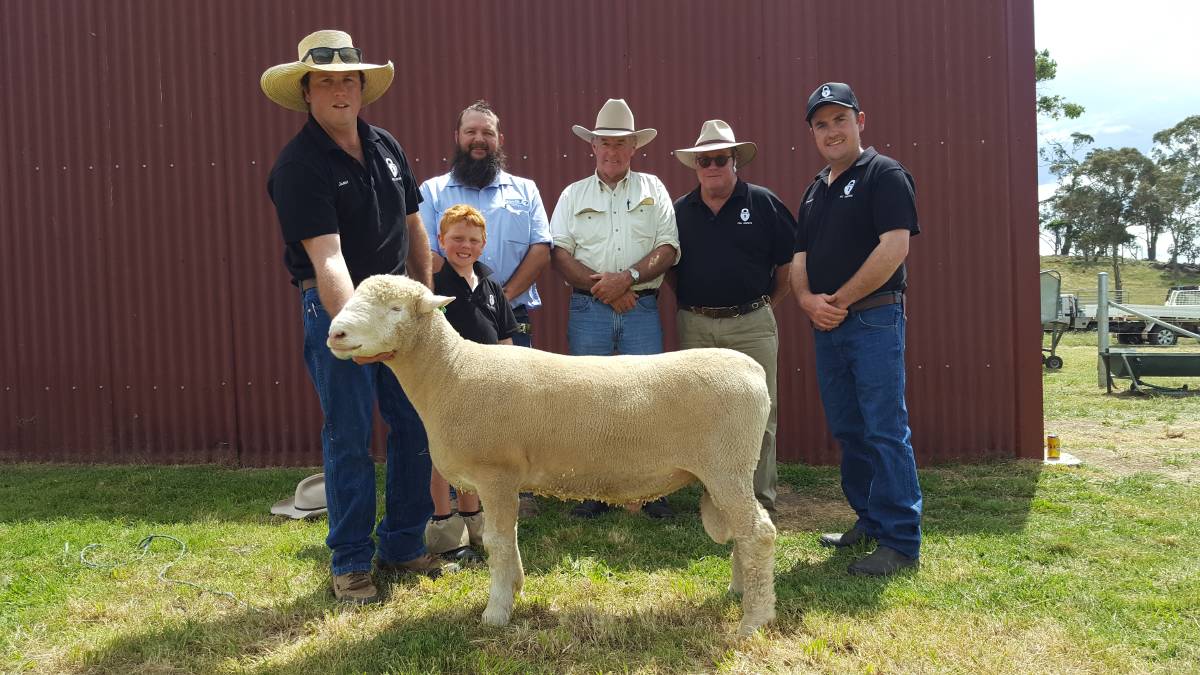 The Helmsman sale seemed like it would never end as buyers went toe-to-toe for the draft.

The Amelie Poll Dorset Helmsman sale was slated for 20 minutes but persisted for an extra 50 minutes as buyers went toe-to-toe trying to secure one of the 35 rams on offer at Uralla on Friday.

The Sharpe family sold their entire draft at auction to average $1528 and top at $4000, well up on last year's results.

Buyers had 20 minutes of open bidding until a one minute timer was set and the auction would end when no bids were made in that time frame.

But the cards continued to flow into the front desk and there was even a late charge for the top ram who had sat in the hands of DP and JM Saunders of Guyra for most of the auction before Tim Nolan of Wombalano at Walcha made his late winning bids.

Mr Nolan intended to join around 700 Dorsets this year and bred rams for himself and his son.

"I didn't think I'd have to buy him for such a lot of money."

Interestingly when the Sharpe family first entered into Poll Dorsets they secured ewes from Mr Nolan.

The sale attracted 23 registered bidders, some from as far as Goulburn but most from local areas including Guyra, Armidale, Inverell, Walcha and Bendemeer.

Speaking after the sale, Brendan Sharpe said about 50 per cent of the buyers in attendance were new.

While it was their fourth on-property sale, they were slowly building and had culled very hard in the drought meaning the catalogue offering was of high quality.

The stud seeks to provide Poll Dorset rams that are true to the Dorset type, with key characteristics including a moderate frame score, wool at the points including poll, belly and breech with the ultimate outcome being a lamb that is early maturing, one that finishes economically and yields well.

"Our strategy of selecting to Dorset type complemented by the provision of Lambplan data is valued by our clientele, with many returning and new clients attending our sale today," Mr Sharpe said.

The top price Autumn drop hogget ram at $3300 was secured by Allan Ball of Harnham Grove at Uralla who uses the rams in his second-cross flock.

Merino ewes are joined to Border Leicester rams and then those are crossed with Poll Dorsets.

"I went on rump and stretch...luckily I only needed one," he said.

His selection weighed 88 kilograms and had a raw data (Lambplan data wasn't available) for birth weight of 7.5 kilograms with a post weaning weight of 64.5 kilograms.