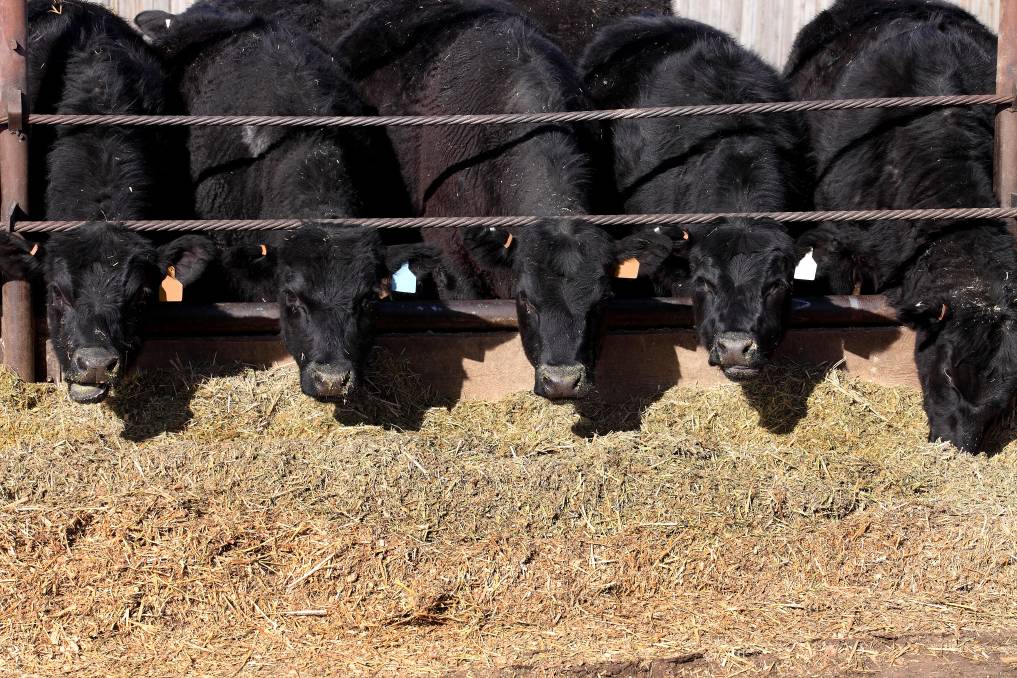 Poor seasonal conditions in parts of America have meant more cattle are finding their way into feedlots as producers conserve pastures.

US cattle are increasingly being put on feed as drought grips parts of the country.

WHILE aware of the potential for the worsening drought in western USA to trigger large scale herd liquidation, commentators there have not so far detected any appreciable increase in non-fed slaughter.

That is despite the observation by analyst Steiner Consulting Group that current conditions are far worse now than they were in February 2011, when the previous liquidation cycle peaked.

The implication for Australia, and other lean beef suppliers, is the impact a liquidation phase in the US would have on demand for such product.

But the start of a cow run may not be far away.

But, instead, the worsening dry conditions may be forcing them onto feed.

No surprise there in the Australian context.

It is a relatively common in Australia to use early calf weaning and offloading of lightweight cattle as strategies to give cows a chance in dry times and to hold numbers for as long as possible.

If this trend intensifies across the drought-affected regions in the US, then almost certainly cows will soon follow to meatworks in increasing numbers.

Meanwhile, the US domestic lean grinding beef market strengthened - at 90 CL product US3 cents per pound dearer from the previous week.

Non-fed slaughter was down 14 per cent compared to a year ago.

The situation will probably take a further week or so to return to a more normal flow, given the number of trucks stranded around the country.

With end-users struggling to get deliveries, and sitting on the sidelines while the situation resolves itself, buyers of imported lean product disengaged from the market and prices eased.

AS the end of February approaches, export figures confirm a very slow start to the year.

Volume of shipped beef to all destinations for the month is estimated at just 65,000t.

In the past 10 years, the previous lowest February result was 74,000t.

Of all destinations, the US is a low-point standout - with an expected volume of about 9000t in February.

The cause of this is the huge reduction in cow slaughter and, therefore, availability of lean beef product.

In mid-2020, the proportion of females in the kill was at almost 57 per cent.

But 48 per cent is the average for the quarter and, as the figure was progressively falling, it is reasonable to expect that by December it would have been down by about 45-46 per cent - or less.

Therefore, conventional wisdom may have had it that herd rebuilding was finally underway.

But a closer look at what actually happened with the 2020 kill in absolute terms may lead us to think that perhaps we are a little too reliant on the percentage female kill statistic as the definitive guide to whether the herd is building or diminishing.

This was all females, as the male component was relatively stable year-on-year.

The point here is that the increase in females in both years was the result of a conscious decision to sell.

The fewer number of males was a direct result of a smaller overall herd, in that the numbers were simply not there.

But overall, there is no real doubt that - in those two years - the herd was in a liquidation phase.

In 2020, total slaughter dropped by 1.33 million head and it was interesting to note that one million of those were females, due to a decision to retain them in the herd.

As well, there were 330,000 fewer male cattle. Again, we can reasonably presume this was due to the fact they were simply not there to kill.

The point being, that herd size - and thus representation - of male cattle in total slaughter is affecting the female kill percentage statistic.

I suspect that instead of a fixed 47 per cent, the delineation between the increase and decrease in herd size might move around a little.

This will be dependent on herd dynamics.

it is probable, therefore, that herd rebuilding in Australia got underway earlier in 2020 than the December milestone suggests.

Cattle supply patterns are improving for processors as they support workers

WITH major meatworks now reporting bookings out to the third week in March, the supply picture has improved from not so long ago - when two or three shifts per week were common.

It is also pleasing to note that Stuart works, at Townsville, is due to recommence on Tuesday March 2, with a good start of about three weeks cattle in front.

But it is by no means a celebration of return to profitability.

This is because, fundamentally, there has been little change in procurement costs - and grids remain at highly elevated levels.

Rather, as one processor described the situation this week, the aim at the moment is to ensure all of their sites are comfortable with numbers so they can provide support for workers.

Having trimmed the number of shifts and throughput per shift, many plants are down to core existence and can not stand to lose any more.

Central and southern Queensland grids early this week showed 670-690 cents per kilogram for 4-tooth ox and 600-610c/kg for heavy cow.

Southern rates moved into closer alignment with the north.

This came after a 20c/kg upward adjustment last week on ox and cow.

Values were at 675c/kg and 610c/kg respectively at Wagga and Naracoorte.