Merino ewe competitions are more than just a field trip. 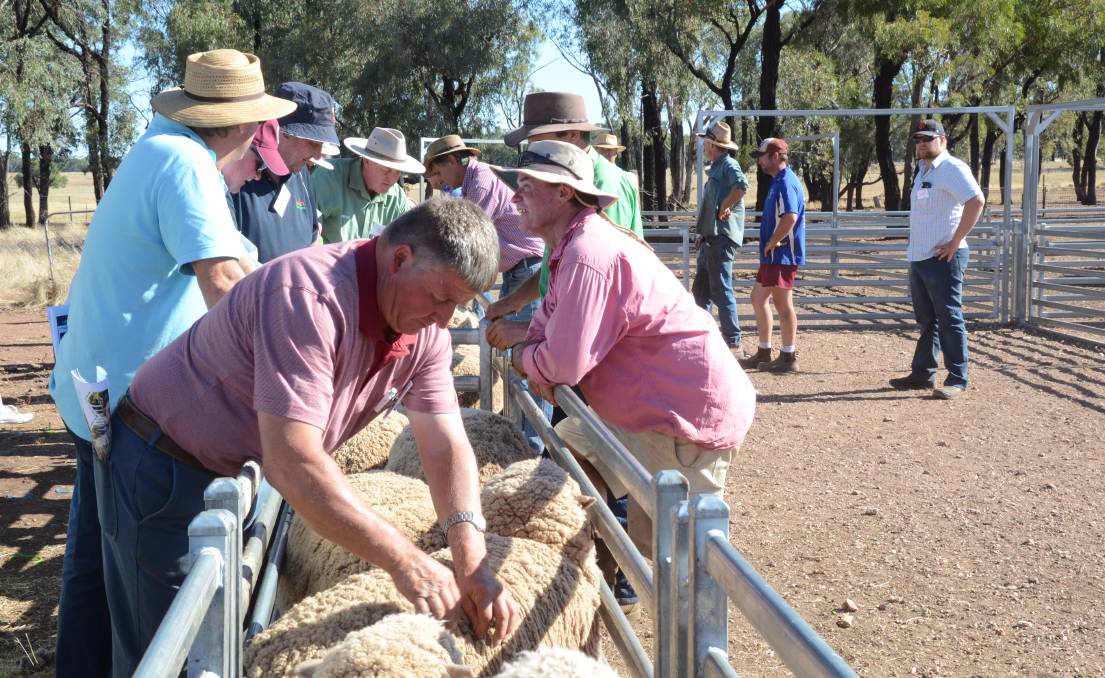 People just love opening the wool to determine their critique of entries. This is a typical scene at any Merino field day flock inspection prior to judges giving their opinions.

HALFWAY through the summer Merino ewe competitions and the temperatures have been quite bearable compared to this time last year, although we did slip and slide a bit at Lake Cargelligo after some beautiful rain the night before.

I've been attending these since 2006 after I rejoined The Land from a spell in the stud cattle publicity game and hotel industry, so, now I feel it's appropriate to look into the value of these competitions. What do people get out of opening their property to visitors to view maiden ewes at 18 to 21 months?

They invite many strangers and peers to view their livelihoods, a likely stressful exercise. The same question can be asked of spectators traveling from property to property. What do they get out of the day?

I see the Berridale Ag Bureau's Monaro Ewe competition kicked-off in about 1930 and while I only came on the scene from mid-to-late 1960s, there are other fixtures that have a very long history.

Possibly, I feel the NSW Department of Agriculture kicked-off these competitions as far back as the 1960s or in the post-war 1950s although obviously the Berridale group have a longer date. So too does the Taralga competition and I know the Croker family (of Bolong Hereford fame) starred in the Country Life sponsored event at least twice.

Those competitions were introduced by the department's various district sheep and wool officers and I remember Country Life (NSW) being the major supporting media and sponsor of the state champion flock.

The trophy was a huge silver bowl about 50 centimetres in diameter, mounted on a wooden base. It was huge, and no doubt very expensive.

The championship dinner was held at the Pickwick Club in Bligh Street, Sydney, and all the heavies of the wool and stud Merino industry attended. This year there are 16 competitions in summer and the Berridale fixture is in May. Interest has ignited within the Cumnock Show Society and it will hold its first event on March 9.

News gets around and I now hear the New England breeders around Walcha may get on board as well.

So, what is it about maiden ewe competitions?

Why the hype? Are they becoming popular again because sheep values have risen, or the sheep breeders are keen to benchmark their flock against others in their district?

He's classed flocks in many different competitions with success, even in New Zealand, and says ewe comps are first, a benchmark.

"You are putting your sheep up for scrutiny and often the person who wins doesn't get the most out of a day like this," he said.

"People down the line see they can improve their flock by doing this or that. But these people are top performers and they see the value of ewe comps."

He said there was increased interest because there's money in livestock.

"There's money in sheep and you can't beat dollars to get people interested," he said.

"You only have to look at the young people who are coming back into the industry too as it's not a bad business."

Condobolin born sheep classer, and now Baldry landholder and Bundemar studmaster, Tom Kirk, believes it's the interaction of the people and what they learn on the day.

"By being involved in a ewe competition people get help from others outside who are trying to help make your product better," he said.

"And their advice which is generally pretty good, is free."

Mr Kirk said people form their own ideas, but they like to see what the other bloke's doing too.

"Breeders are open to ideas and suggestions, but they'll form their own opinion and run with that."

He said contestants were part of the community, so they get involved.

"It's the same as people taking sheep to a show," he said.

"They are proud of their flock and enjoy showing other people what they have done. Even in a bad year, people will still hang in and put the flock on show."

Mr Kirk said Australian Wool Innovation had given the commercial ewe competitions association a seat at their feedback table in their consultation process.

"And the feedback that is coming from genuine commercial wool producers that from these field day style competitions is looked at very favourably by AWI," he said.

Russell Jones, chair of the Trundle Ted Little Competition and the Central Western fixture, thinks people enter to firstly gauge where they are at with their breeding program.

"And as the competition develops it becomes a commitment from the breeder and the committee to see what is happening and evolving in the Merino breeding industry," he said.

"With our breeding we still need the visual assessment and a ewe comp still does that, so we don't want to lose that art within our industry."